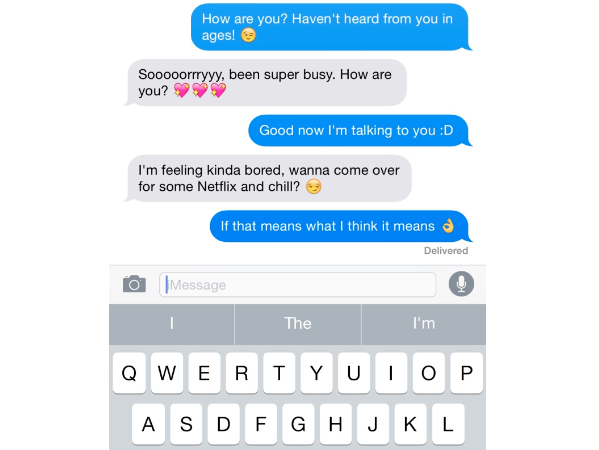 Since mobile phones have been around, and the ability to take photos, people have been able to sext.

Sexting is defined by dictionary.com as, “the sending of sexually explicit photos, images, text messages, or e-mails by using a cell phone or other mobile device”.

Statistics show that most sexting goes on between young adults.

Another tool which has helped this demographic send sexual messages is Snapchat.

The application allows users to send a photo or a text message to another user that expires and is no longer visible after 1-10 seconds.

This brings about questions around privacy, morals and ethics.

SBS was quick to criticise CK, labelling them as “unethical” and their advertising as ineffective.

Does this campaign represent growing acceptance in society of sexting?

Comment: Calvin Klein’s new sexting ads are not only unethical, they may not even be effective http://t.co/DJ7s1Ex5mZ pic.twitter.com/JQ9cxqW9bn

David Hagenbuch, writing for SBS, said that sexually charged ads are memorable, but so is a bad case of food poisoning.

“Like other mindless marketing, oversexualized ads leave an ill feeling for many consumers and may sicken an entire society,” he said.

CNN recently indicated that sexting is normal and practised by most sexually active adults.

Online survey finds that 88% of adults have sexted. http://t.co/DwCdrDuKaC

Kate Dempsey, who works in the fashion industry, tells upstart that CK is already seen as a highly sexualised brand through its previous marketing.

“I don’t think this campaign is a huge risk for them,” she says.

Dempsey sees this as CK relating to their customer base, rather than influencing or encouraging them to send sexual messages.

“I believe that this campaign is aiming to relate to young adults that sext, hence leveraging their brand as being sexy and desirable,” she says.

The campaign is aimed at young adults, an audience that is of mature age and understanding.

“CK’s previous campaigns have worked with their use of nearly-naked celebrities,” Dempsey says.

CK also got a lot of attention for its advertising campaign which featured Justin Bieber in a pair of their iconic white underwear.

“I guess the brand is capitalising on the fact that sex sells, and this is something no other brand has done,” she says.

In the advertisement itself, CK notes that the sexual conversation is “inspired by true events”.

“Personally, I’m not a huge fan of the campaign, but the publicity they are attracting from this could be a huge success for them.”

In this instance, sex clearly sells, regardless of the social or moral issues associated with sexual advertising.

Tam Kendi is a third-year journalism student at La Trobe University and the deputy editor of upstart. You can follow him on Twitter: @tamkendi.