From the first protests, NBA players have made a huge impact by fighting against racial injustice and advocating for change. 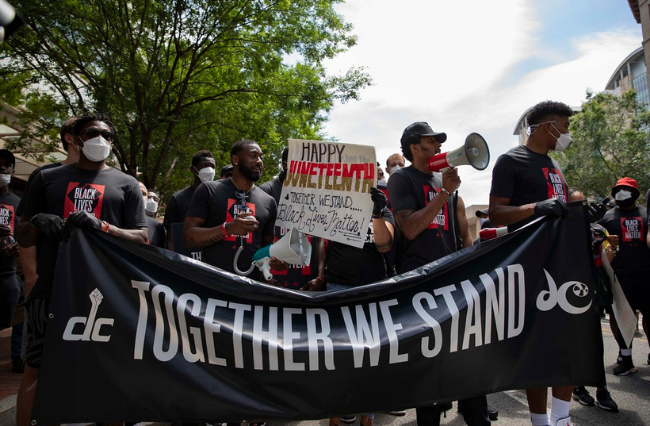 On 30 May, protesters marched the streets of Atlanta to raise awareness for racial injustice and called for police brutality to end.

“What do we want? Justice! When do we want it? Now!” they chanted.

Among them was Boston Celtics star Jaylen Brown, who organised the march and drove 15 hours from Boston to Atlanta to lead it.

“This is a peaceful protest. Being a celebrity, being an NBA player, don’t [sic] exclude me from no conversations at all.” Brown said in an Instagram live video. “First and foremost, I’m a black man and I’m a member of this community. We’re raising awareness for some of the injustices that we’ve been seeing, it’s not okay.”

"Being a celebrity, being an NBA player don't exclude me from no conversation at all."

Jaylen Brown drove 15 hours from Boston to Atlanta to join the protests.

Indiana Pacers guard Malcolm Brogdon also joined the march, and was proud of Brown for leading the charge.

“I’ve got brothers, I’ve got sisters, I’ve got friends that are in the streets, that are out here, that haven’t made it to this level, that are experiencing it, that are getting pulled over. Just discrimination, day after day,” Brogdon said in a video on Brown’s Instagram page.

Since the first protests against racial injustice and police brutality began, players across the NBA have been setting an example with their actions by joining the movement. Timberwolves star Karl-Anthony Towns and teammate Josh Okogie attended the Minnesota protests in response to the George Floyd incident, which happened there. Kyle Lowry from the Toronto Raptors and Tobias Harris and Matisse Thybulle from the Philadelphia 76ers marched the streets of Philadelphia, while Blazers star Damian Lillard joined the Portland protests.

It all came together during the NBA restart in Orlando, as the league consistently pushed the message for justice and change. “Black Lives Matter” was put on the court and players had the option to put a social justice message on the back of their jersey such as “Equality” or “Say Their Names”, in reference to all the African-American victims of police brutality. Out of 350 players, 300 chose to put a message on their jersey.

The efforts of the NBA impressed sport management lecturer, Pam Kappelides, who appreciated the league taking advantage of their platform to raise awareness of injustices and advocate for change.

“Players are often seen as heroes and these messages are very important for the broader community who idolise these sport stars and what they have achieved,” Kappelides told upstart.

Players made an impact from the first protests, and they maintained that momentum in Orlando. Matisse Thybulle’s YouTube series in the NBA bubble was popular with the fans and while it provided great entertainment, it also showed the thinking behind the messages they wanted to send out.

Sport journalism lecturer Merryn Sherwood was also moved by the players using their positions as NBA stars to speak out, particularly through the contributions of personal stories.

“I think what we know as journalists is that personal stories are really powerful. For the Bucks for example, the issue was personal because Sterling Brown, one of their players, was tackled by police officers and shocked with a taser in 2018 – for a parking violation,” Sherwood told upstart.

“For an athlete to speak about the effect that had on him, and why he refused a settlement deal with the city so he could speak on it, could be really important in breaking through to fans that don’t understand the issues.”

The most notable act in the Orlando bubble was during the first round of the playoffs when players boycotted games in response to the shooting of Jacob Blake. The Bucks began the boycotts, then the Magic, Thunder, Rockets, Lakers and Blazers followed suit.

Stars around the league such as Donovan Mitchell, Jamal Murray and Trae Young took to social media to voice their support for the boycotts.

To Sherwood, it was an initiative that truly showed the power of the players.

“I think it was really interesting to see the athletes take this next step of action. It wasn’t just the NBA, but the WNBA, some MLB teams, Naomi Osaka, and together it really seemed to set a new era of sports protests. It wasn’t just about promoting awareness, but taking action,” she said.

Since the NBA protests, other leagues have been following their lead. Sherwood admires the initiative of players from the San Diego Loyal in the USL Championship, for walking off the pitch in response to a homophobic slur directed at one of their players.

“As a sports fan, I’m welcoming [such protests]. Sport has often been the site of racism, homophobia and sexism, and I think it’s important these issues continue to be addressed,” she said.

In the future, Pam Kappelides sees similar protests across different leagues normalising as more players continue to speak out.

“While this is not the first time these protests across the years have occurred, the more that these incidents continue to happen, the more players will speak out, and the more these and similar protests will become as standard as the sport itself. We have even started to see this in AFL and Indigenous sport players,” she said.

”We should embrace our differences and sport across the world can break down or protest against injustices.”

Article: Stephen Riosa is a third-year Bachelor of Media and Communication student (Sport Journalism) at La Trobe University. You can follow him on Twitter @stephenriosa.