Over its first two seasons, the VWFL have assisted in turning football into one of the most inclusive sports in the country. 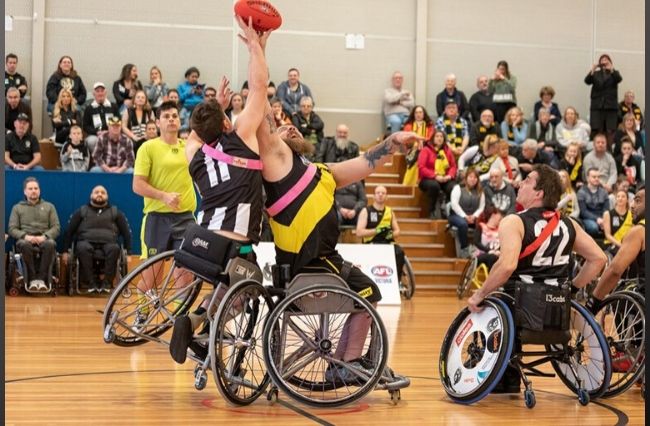 The sport of Australian Rules Football was once just a game targeting one demographic: young males. But now in 2019 there are now opportunities for all Victorians, no matter the gender, race or disability. An example of this is the Robert Rose Foundation Victorian Wheelchair Football League.

The league, comprised of five teams, has just completed their second official season. These clubs, Collingwood, Essendon, Hawthorn, Richmond and St Kilda, work closely with the Disability Sport & Recreation organisation and AFL Victoria to develop the sport of wheelchair football in the state.

Scott Nicholas, the Disability Programs Manager for AFL Victoria has played an important role in the development of the league over the first two seasons.

“The first year, my role was really about creating everything, from the rules to the guidelines for the league to the role the key stakeholders would play,” Nicholas told upstart.

“With the competition in its second year, we were really focusing on building out the support structure of the league. Bringing on more staff to manage the competition, so we could spend more time working directly with the AFL clubs about building a more inclusive practice.”

The game is played on an inside court that’s divided into thirds. There are five players on the court at all times, positioned as two forwards, one midfielder and two defenders.

Originally wheelchair football was a national competition, with AFL Victoria supporting a state team that competed. The motivation behind an official Victorian league was to build a pathway for the state team.

“In terms of developing the sport here in Victoria, it was very important that we had a regular competition. It provides an opportunity for people who generally wouldn’t have an opportunity to play footy, to be active, to be part of a team and to build their social connectiveness,” Nicholas said.

“AFL Victoria’s vision is to be the most accessible sport for all Victorians.”

The league has given a great opportunity to many people who found themselves struggling to find motivation in their daily life.

“We’ve had some examples of players who have lost 30 to 40 kilos because before they participated in the league, they didn’t have any motivation to be physically active,” he said.

“We had one guy in a wheelchair for six years. He didn’t leave his house much, he didn’t have any connection to anyone else in a wheelchair and had high levels of depression and anxiety.

Getting involved in the league created a whole new level of friends and support and he is now actively involved in a number of other programs outside the league. It showed him that even with a disability, there are no restrictions on what he could achieve.”

There’s also a potential for league expansion over the coming years. While there is some interest from a couple of other Victorian clubs, the biggest focus is developing the capacity of the clubs already in the program.

“Blue sky thinking, we would love to get to a point where it’s a ten-club competition with all AFL clubs in Victoria represented. But we see that over five to ten years coming to fruition,” Nicholas said.

The league has already upped the competitiveness in the first two years, with Nicholas noticing quite a significant change in competitiveness from the 2018 season to the 2019 season.

“Jumping from year one to two, there was a lot of warm and fuzzies in year one, ‘how great is this that we’re playing, AFL clubs are backing it, this is awesome’. To very quickly going to, we need to maintain a competitive advantage and think about our strategy. It was a lot more competitive,” Nicholas said.

Players have also begun to try different things on the court to give themselves an added advantage. Coaches have experimented with new strategies that have led to scenarios within a game that hasn’t yet been addressed by the organisation. For Nicholas, this is an interesting process to be a part of, as the sport evolves so rapidly.

Publicity is an important aspect of growing any sport.

Ayden Shaw, the Sport and Recreations Manager for AFL Victoria believes as the league develops over the following years, so will the publicity.

“There’s enough broader recognition of disability sport now than what there was five years ago. The sport itself, we’ve been really fortunate to have amazing support from the five AFL clubs we’ve partnered with. They’ve been able to raise the profile of the sport,” Shaw told upstart.

“I still think there’s still opportunities particular with education and linking to major matches. An example of that is in a few years’ time, it would be great to have a wheelchair (match) before a VFL match.”

AFL Victoria has been successful so far in their major focus on inclusion for all Victorians. Nicholas cites Trent Cotchin’s acknowledgement of the league at this year’s Grand Final as a major moment in that respect

“For an AFL captain, after achieving the ultimate, to have the wheelchair team front of mind, that kind of level of engagement and embedding within a club is what we would like to see more of in five years’ time,” he said.

“To take that further, any football fan in Victoria knows that there’s a wheelchair football league happening. If in five years, if we can get to something like that, it would be incredible.”