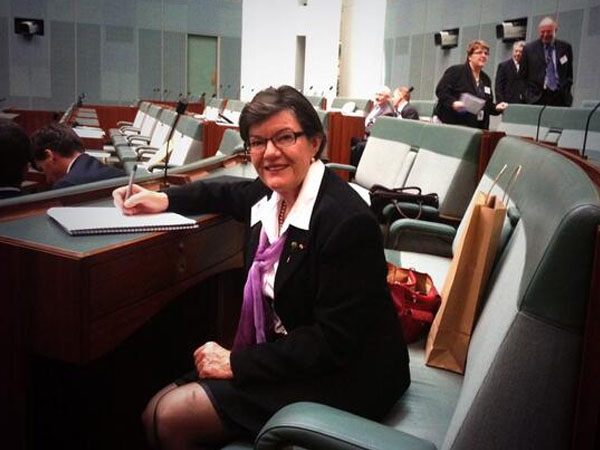 Cathy McGowan has a lot to smile about. If she has time, that is.

As the first federal independent to take the rural seat of Indi from the major political parties since the 1930s, she has many plans for the electorate.

“Life has become very hectic and it has been a steep learning curve to learn all of the things that I need to know,” Ms McGowan says after beating Liberal MP Sophie Mirabella in the closest ballot Indi has ever seen.

Grassroots community movement Voice For Indi is the reason she is sitting in her new office in the town of Wangaratta in Victoria’s north-east.

Voice For Indi drafted Ms McGowan to run as an independent against Ms Mirabella, who had held the seat since 2001.

Sitting in Parliament listening to an address from the Speaker, Anna Burke #auspol pic.twitter.com/98hAkerixB

Ms McGowan says she chose to do it “mainly because I got asked”.

“There’s a saying in leadership to ‘put your hand up, step up’ and I thought, well this is a good opportunity for me to practice putting my hand up and stepping up,” she says.

“I have a want to see this community where I live reach its potential and a vision for Indi and how we might be in the future, where there’s good jobs [and where] we care for the environment.”

“I thought politics is an opportunity for doing some of that work.”

Voice For Indi was created when 12 locals believed the interests of the political parties were being placed before the needs of the electorate.

But Ms McGowan says it’s a mistake to put all of the blame onto former MP, Sophie Mirabella.

“We particularly saw that play out with young people, they were just not interested in politics.”

“I had a sense that, well that’s a real pity, we ought to see if we can do something about it because being in a community where people don’t want to engage in politics is sort of like giving up hope.”

Determined to see the community more engaged, she says that “people just accept the status quo and say ‘that’s good enough’ and I wasn’t sure that that was right”.

Ms McGowan had a major presence of young people in her campaign team, which she believes helped her win the votes.

“I absolutely believe that the 439 votes that I won by were people under 30, probably under 21 really,” she says.

The tech-savvy Gen Y team used social media a lot into their campaign, including a quirky blog called Cats for Cathy which spread funny cat memes throughout the Internet.

Cambell Klose, media strategist during the campaign, who is now a media advisor for Ms McGowan, told the Sunday Herald Sun that she gave them a lot of headway when campaigning.

“There’s something very charismatic about Cathy, she just places so much faith in the younger generation,” he said.

With the forming of Voice For Indi and success against what was a safe Liberal seat, Ms McGowan says it shouldn’t serve as a warning to other assumed safe seats, but a message to communities.

“What I love about it is this sense of what a community can do when it gets its act together… So I think the message is more for us locals, that ‘gosh look what we did when we got organised’,” she says.

A major topic Ms McGowan and her team campaigned on was agriculture, an industry close to her heart.

Ms McGowan has a Masters in Applied Science in Agriculture and Rural Development from the University of Western Sydney and is a former president of Australian Women in Agriculture.

“It’s our major business… 13% of the income from the electorate comes from agricultural manufacturing,” she says.

Agriculture is also a major source of employment for farmers and the people who live along the valley.

“It’s the occupation that provides the glue that keeps our communities together,” she says.

“We’ve got our major towns but then once you move out of town it’s the farmers and the rural communities that steward all the rest of the land.”

“I’m looking for some sort of long term plan for food production but the most important thing in the short term is making sure that we’ve got telecommunication and good broadband and mobile phone coverage to our rural communities.”

“That puts in place the infrastructure that we need to do the work,” she says.

With ambitious plans for the future of Indi, Ms McGowan just hopes to do her electorate proud.

“I would like to be remembered as representing Indi well, that I was honest, that I was trustworthy and that I was a good politician.”

Caitlyn Leggett is a first-year Bachelor of Journalism students at La Trobe University and this is her first piece for upstart. You call follow her on Twitter: @caitlynjane