Who could forget Ben Stiller a.k.a really, really ridiculously good-looking model, Derek Zoolander’s famous Blue Steel look or Vince Vaughn’s hilarious role in Wedding Crashers? Listed by IMBD as among the top 15 best comedy actors, together with Vince Vaughn and Richard Ayoade, Ben Stiller and Jonah hill star in new movie, The Watch. In the film five unlikely heroes band together to form a Neighbourhood Watch group to help fight off an alien invasion. 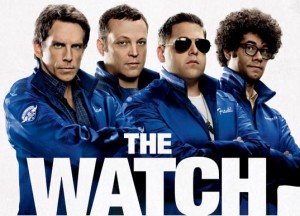 This latest release begs the question: have older comic actors passed their prime as being ‘the funny guys’? There is no doubt that Vaughn and Stiller have created what can only be called comic genius in past movies. From Meet the Parents to Dodgeball and Old School, both actors have produced countless one-liners that will be remembered for years so come.

But like other comedy actors who have been around for a while, one can’t help but wonder if they are getting too old to play these comical roles.

Ben Stiller’s first big comedy hit was in 1998 in the movie There’s Something About Mary, and nine years ago, Vince Vaughn was sky-rocketed into popularity when he starred in Old School. Similarly, famous comedian, Adam Sandler’s, first major comedy movie was back in 1995 with the movie Billy Madison, a far cry from his latest flop, That’s My Boy.

In this latest movie, The Watch, Stiller plays an uptight nerdy Costco manager who has a perfect home and a perfect wife. He is a friend to all and particularly wants to have a multicultural group of friends; the only thing missing is a ‘black’.

After a local security guard is mysteriously killed, a teary Stiller announces his plans to form a Neighbourhood Watch group that will help find the killer and return the community to a safe state. Vince Vaughn, Jonah Hill and Richard Ayoade are the Neighbourhood Watch.

Vaughn is the optimistic father, Jonah is a high-school police reject rebelling against society, and Ayoade is the tall, well-spoken ‘token black guy’ who has a mouth on him that no one would have suspected. Together they band together to find and destroy the killer- a swarm of aliens- and become the heroes of the town.

I must admit, the story-line didn’t thrill me when I first saw previews, and the reviews I had read prior to seeing the movie were a little off-putting. But being a big fan of Vaughn, Stiller and Hill, the movie was a must-see for me. The Age gave the movie two out of five stars, claiming that ‘The climax of The Watch marks a new low in lazy screenwriting’ and ‘walks the line between thoughtless stupidity and truly unpleasant racism’.

While these review may be unflattering, I would have to disagree. Sure, the script wasn’t the greatest of all time, but I still found myself laughing for the better part of the movie. For me, just looking at the actors in the movie makes me laugh. They don’t even have to say anything, and although some may argue that the A-list stars’ ‘lustre evidently dimmed some time ago’, their comic wit and mannerisms continue to get a laugh.

While they may not exactly be like a fine wine that gets better with age, comedy actors that have been around for decades continue to bring laughs on the big screen when teamed with the right co-stars. If they appear to be ‘lacking in lustre’ then perhaps it’s the script-writer is to blame. After all, you can only work with what you’re given.

In my opinion, the latest comedy release, The Watch, while not quite as good as some of their previous movies that made them famous, still displays the talent of the older much-loved actors. If you loved them until now, you will not be disappointed.

For me, the hilarious movies that these guys have produced will outweigh any bad movie choices they choose to take on, and they will forever remain funny whether they’re 50 or 80 years old.