The first thing you need to know about Chatroulette is that it’s not for the faint hearted. It’s also not safe for work. Nor is it safe with minors, parents, or teachers in the same room. That being said, it’s a whole lot of fun, it’s suprising, voyeuristic, and an excellent way to experience all the colourful people out there in cyberspace.

The premise behind Chatroulette seems to be a combination of existing Internet tools like chat rooms and webcam streaming. It’s simple really; once you’re on the site, you simply have to click “Go” and you are randomly slotted with another user and your webcam is activated. You see your own webcam picture on the screen as well as the stranger’s, so it’s just like meeting someone new as you see their face, and they see you. Except that you could be five thousand kilometres away. Then, you are free to type to your new companion or simply stare at each other. If you aren’t interested in chatting to the person presented to you on the screen, simply click ‘Next’, the screen tells you that it’s “Looking for a random stranger” while it loads and then you are connected with a new user. If your chatting companion doesn’t like the look of you, they are free to ‘Next’ you as well. 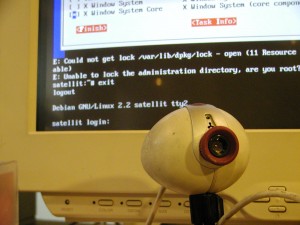 Be warned; as is the nature of chat rooms, the content can sometimes be unpredictable and confronting. For every great conversation you have with a lovely 20 year old student from Sweden, or a guitair playing Canadian, there’s the high possibility you will come across gentlemen behaving in an unsavoury manner, and often missing their pants. Or women missing their tops. I have also heard of exhibitionist couples doing the ‘horizontal mambo’ together for the camera. This is why using Chatroulette with your grandparents in the room is not advisable. Whenever confronted with unwelcome nudity, a quick click on the “next” button easily resolves the situation, and hopefully brings you on to a better chatter.

It can be slightly rejecting, however, when you come across someone you think you would like to chat to, only for them to take one look at you and then across your screen flashes “Your partner disconnected. Reconnecting…” This happened repeatedly on one occasion, with around ten different chatters all jumping to ‘next’ me before I could even type a word.  If it wasn’t my witty banter that failed to keep people around, then it must have been my looks. I left that chat session feeling rather deflated.

As with most Internet trends, Chatroulette gained momentum quickly. It was created only a few months ago in November 2009 and now boasts around 500,000 hits per day. The site was reportedly created in Moscow by 17-year-old Andrey Ternovski, who originally created the site for fun. “I myself enjoyed talking to friends with Skype using a microphone and webcam. But we got tired of talking to each other eventually. So I decided to create a little site for me and my friends where we could connect randomly with other people” he told The New York Times.

The thing that makes Chatroulette exciting and entertaining is that you never know who, or what, you’re going to be faced with when you hit that ‘next’ button. One of the most popular screen shots floating around the net is of a man dressed head to toe in a leopard print leotard, or else there’s an abundance of other fruity people with decorative hats, face paint, costumes, pets, instruments and hand written signs. You might even be lucky enough to come across a famous face like Paris Hilton, Ashton Kutcher, and Hollywood gossip blogger Perez Hilton, who have all been screen snapped by their surprised chat partners. Other celebrities such as Kelly Osbourne, Joel Madden and his fiancé Nicole Ritchie have taken to their Twitter accounts to comment on their experiences on Chatroulette.

There’s a good chance that in a few more months, every internet user will have heard of the Chatroulette craze sweeping the world. Or else, it might have been shut down due to the moral panics of parents or the politically correct grumblings of politicians. Either way, everyone should jump into the Chatroulette world, if only just once.

Laura Carroll is a Bachelor of Journalism student at La Trobe University.