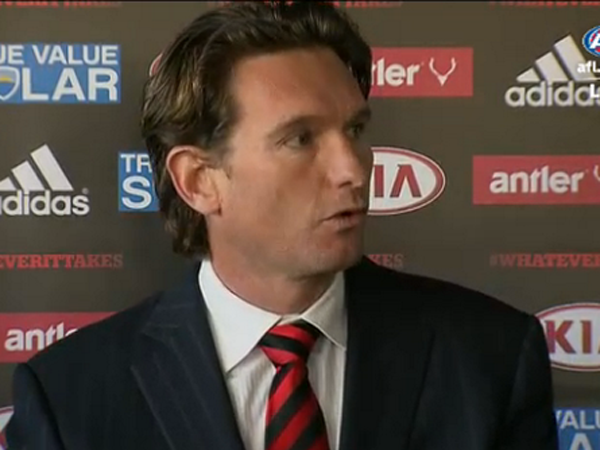 For the good of the sport, and its integrity, two things need to happen this week: Hird must step down, temporarily – pending the verdict to the final ASADA report, and Demetriou must resign, permanently.

Tanking and drugs have taken their toll and the game needs a fresh face. Hird’s words on Wednesday echo the thoughts of many outside of Windy Hill.

This has become a never-ending tennis rally with no winner in sight. Instead there is powerful and conflicting blows exchanged between the two players, each baseline shot heavier than the one before.

Only in this case, one of the players is also the umpire, at least according to the other player. This whole saga has arguably conflicted both Demetriou and the AFL, notwithstanding how scattergun this investigation has become, with leaks to the media undermining it.

On one hand they are trying to protect the brand, on the other they are adjudicating on a club alleged to have brought the game into disrepute. It’s a tightrope the AFL isn’t equipped to walk, with Demetriou at the helm.

Yesterday’s events justify this. Essendon is far from in the clear, but nor is the AFL. While both sides repeatedly bash heads until a concussion forces a surrender, it’s important the upcoming hearing is placed into a broader perspective.

First, this is a perilous situation on numerous fronts. It’s like nothing the sport has ever seen before or would like to see again, and it’s become an impossible task to unravel a cat-like clew ball of truths and lies.

While most fans would like to take a deep breath and enjoy finals football, Wednesday’s developments make this a near impossibility.

The 34-page document of charges released by the AFL is damning. It condemned areas of governance, responsibility, morality, legality and health and wellbeing. According to Hird, not only did the timing of this public release lack “courtesy”, but Dr Bruce Reid’s letter within the report was also a “breach of due process”.

“The letter released in isolation, is designed to damage my reputation,” Hird said.

As a result, Hird rightly called for “Mr Demetriou and the AFL to recuse themselves from any hearings of this case because of the conflict of interest.”

How the league can adjudicate despite its brand being pulled through the mud is beyond reason. Specifically, how Demetriou can stand firm amid such sensitive legal objections from Essendon is even more pertinent.

Like any trial, due process is the most vital element. Without it, the outcome is smeared. Hird’s decision to sue the AFL on Wednesday evening follows his claim that he is being “ambushed” by the league via “trial by media”.

This is not to say Essendon is faultless. 34 pages of charges weren’t written by a novelist looking for a best-seller. This is real and as we’ve heard on numerous occasions, affects real people.

But whether the Bombers are guilty or not is currently irrelevant. What’s important is that they are allowed to put their case forward in a fair and just environment.

There are no winners here. The possibility of a victor was lost the moment Essendon self-reported, with or without Demetriou’s alleged instruction.

On Wednesday, Hird’s response to the release of the charges was measured but unmistakably forthright. He hasn’t wavered, and for this he must be commended.

The irony of the Essendon sponsors backdrop reaffirmed its position on Wednesday. #whateverittakes was plastered all over the plastic sheet in a show of defiance that can only be described as unflinching.

Maybe chairman Paul Little believes attack is the best form of defence. More probable is that Little and Hird now feel as if they have no choice but to retort with such stanchness, given the AFL’s sudden willingness to publicise the charges despite months of deafening silence bordering on tactical manoeuvring.

Disturbingly, the AFL is acting more and more like a schoolyard bully. It’s imposing its considerable influence on the process and throwing its weight around as if Essendon is merely an annoying child. Demetriou’s somewhat aloof recent persona exemplifies this.

Late last week he told 3AW “I can’t really see where the conflict of interest is”.

Frustratingly for Demetriou and his supporters, Essendon has proved to be far more than just a nuisance.

The Bombers are refusing to lie down. Rather than just defending themselves, they are going on the attack.

What we do know is the significance of the charges, verdict and potential penalties that are associated. Given the harmful implications of a guilty verdict, it’s imperative that there are no question marks hanging over the judicial process.

A democratic process is paramount.

This battle of attrition may go on for months or even into 2014. In the meantime, it’s in Andrew Demetriou’s best interests to resign and hand the case to an independent arbiter.

Whether he is innocent or guilty, naive or unethical, Hird’s position has become untenable and he must step aside in the short term. Whether he likes it or not, in times of distress he cannot be seen to be bigger than the club.

AFL football is on the edge of a cliff. The game will endure most hardships, but its integrity may not unless Hird steps aside and Demetriou resigns.

Tom Morris is a third-year Bachelor of Journalism (Sport) student at La Trobe University. You can follow him on Twitter: @tommorris32