Over 80 firefighters are on the scene trying to get the blaze under control. 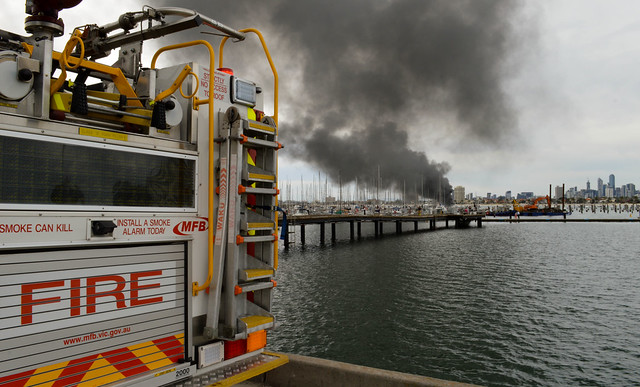 A large chemical fire has broken out at a waste storage facility in Campbellfield, as smoke from the blaze billows into nearby suburbs, with southerly winds pushing it towards the city.

Metropolitan Fire Brigade chief officer Dan Stephens told the Herald Sun “we’ve managed to prevent any significant spread [of the fire]”, but added that the fire may last for days.

The smoke has begun to spread into nearby suburbs, with authorities issuing Watch and Act protocols for Campbellfield, Broadmeadows, Coolaroo and Pascoe Vale. Residents are urged to “take shelter indoors immediately”.

“Anyone located in these areas should shelter indoors from the smoke, ensuring all exterior doors, windows and vents are turned closed and that heating and cooling systems are turned off,” the warning said.

The Metropolitan Fire Brigade also advises anyone away from home to not return, and for drivers to stay clear to allow emergency personnel access to the area.

A 3AW caller named Pip, who works on the next street from the fire rang 3AW’s Ross and John to report on the fire, where he was commended for his detailing of the event.

“Flames are easily 30m in the air. We’ve got fireys coming in now, I can hear the sirens from everywhere. But the intensity of this fire is just enormous.

“There’s smoke going everywhere, heading in the city direction. So I dare say there’s going to be quite a few delays in this area, and lots of fireys present and possibly police.”

“I don’t know what’s in that factory, but there’s a lot of explosions.”

Firefighting teams were first called to the Bradbury Industrial Services waste facility on Thornycroft Street at 6:40am, with the Metropolitan Fire Brigade confirming that 30 people escaped the building before emergency services arrived.

The Herald Sun reports that several schools in the area have closed, with 3AW callers saying their parents had been contacted to pick their children up.

The ABC reports that people at nearby workplaces were also evacuated. A nearby employee named Roy called ABC Radio Melbourne, saying “we could just smell it when we left our factory”.

The Environmental Protection Authority suspended the license of the factory on 21 March for “storing more waste than permitted under its EPA licence”.

Photo: Fire truck by Francisco Anzola available HERE and used under a Creative Commons Attribution. The image has not been modified.