Afghan women are demanding their voices be heard under Taliban rule. 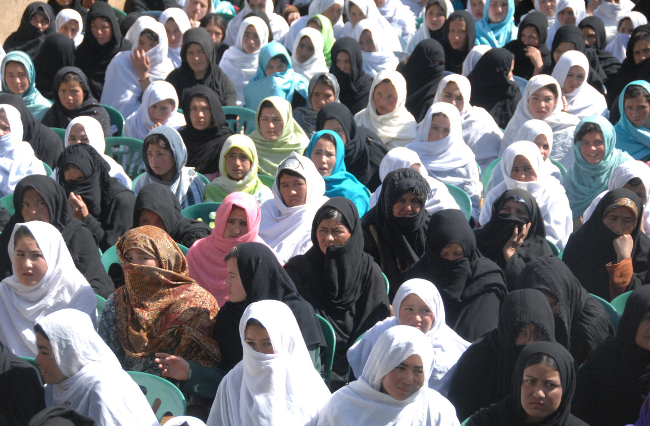 Once the bullets had stopped and a ceasefire called, the children could come out to play on the streets of Kabul.

Despite the war that existed beyond her walls, writer and activist, Homeira Qaderi, remembers the colourful fruit trees that grew in her family’s courtyard. This imagery of her childhood is described in Qaderi’s book Dancing in the Mosque.

In recalling her memories of growing up in conflict-stricken Afghanistan, Qaderi remembers her Nanah-jan (grandmother) saying that “a girl should have fear in her eyes”. But Qaderi was raised in war, and as her Madar (mother) would often say, it contributed to her fearlessness.

“Before Homeira heard her own cries, she heard other people’s screams. No wonder she isn’t afraid of anything.”

Like many women in Afghanistan, Qaderi has been fighting for women’s freedom since the Soviet occupation, and as the country’s current situation deteriorates, she is forced to continue the struggle.

For Qaderi, in a world where Afghan women are considered free, they should be allowed to have active roles in determining their destiny and their rights should be protected.

“An independent Afghanistan is a land where women are not banned. Women should not be considered second-class citizens and shunned from society,” she says.

However, on 15 August this year, the Taliban stormed Kabul, establishing control over the country yet again. After 20 years of war, US and NATO troops withdrew, permitting the Taliban’s extremist views to be enforced once more.

The Taliban are a predominately Pashtun group that first took over Afghanistan in 1996, following the withdrawal of the Soviet Union who had invaded the country in 1979. In 2001, the Taliban’s control lessened when US militants entered Afghanistan following the 9/11 Al-Qaeda led attacks on the World Trade Center. The US missions had sought to find Al-Qaeda leader Osama Bin Laden, whom the Taliban were harbouring.

Yet, even after the US invaded, the Taliban maintained control over some provinces and executed regular attacks.

The Taliban follow a strict interpretation of Sunni Islam and under their rule, women and girls are being stripped of their rights to gain an education, seek employment and have an influence on societal affairs.

Throughout the last 20 years, the hard work of Afghan women like Qaderi has seen great progress within the country. Since the regress of the Taliban in 2001, women have gained more independence and held essential positions in society, such as ministers and governors, teachers and business owners.

In 2003, the Afghan government ratified The Convention on the Elimination of all Forms of Discrimination Against Women, and in 2004, the Afghan Constitution held that “citizens of Afghanistan, man and woman, have equal rights and duties before the law”.

Throughout her life, Qaderi has used writing and activism to help bring change to Afghanistan and continues to do so under the Taliban’s full control. She has written six novels, homeschooled refugee children prohibited from attending school, and been a senior advisor to multiple Afghan ministries. For her bravery, Qaderi was awarded the Malalai Medal by the former Afghan government, but since the Taliban regained control she feels helpless.

“Fighting for women’s rights gave me a good feeling in a land where women needed support. I experienced a sense of achievement before the Taliban. But now I feel useless and I’m disappointed,” she tells upstart.

These feelings are shared by the many Afghan women who have made new homes abroad, but whose loved ones remain behind. Such as artist Humaira Fayazi, who lives in Melbourne but grew up in Kabul. She was born in 1997, a time when the Taliban had control over most of Afghanistan. Women lived under tight constraints and public beatings and executions occurred. But Fayazi too has seen progress made in her lifetime.

Fayazi says the younger generation has tried to bring changes to their country. In Kabul, Fayazi had her own art gallery where she taught classes in realism to young girls and boys. However, the gallery was more than just a place for making art.

Despite the social improvements that occurred at the time, the society around the gallery struggled to accept women’s work and even art itself. Until she had to leave, Fayazi and her students would meet there at the end of each week and discuss the issues in their family homes and community.

Fayazi came to Australia after being injured in a bomb blast in Kabul in 2017. She has since had ten surgeries on her legs, including one just before this interview to remove a remaining pellet from inside her femur bone.

She has also lost many loved ones during the current situation in Afghanistan, but grief is not new to her. Growing up in Kabul, Fayazi witnessed plenty of violence.

“I have seen a lot of people, they’re dead in front of my eyes and it affects a lot on me and also my friend because we were together,” she tells upstart.

“And you know, you live with war and bomb blast every time, and you are not sure that if you go out [you] will come back alive at home.”

Despite the hardship she has faced, the Afghanistan that Fayazi knows is one of a “good country and lovely people”. She says it is the ongoing war that prevents the new generation from having a better life.

Fayazi is doubtful that the Taliban can be defeated this time around. She says they are too powerful and that the diplomatic relations that have commenced between the group and the international community have left the Afghan people deserted.

Afghans all over the world are calling on global leaders to not ignore the Taliban’s violence and suppression. Afghan activist, politician and former Mayor of Maidan Shahr, Zarifa Ghafari, writes that the international community must end all engagement with the Taliban until they prove they will respect human rights.

Ghafari says that global leaders made a mistake in abandoning the Afghan people, and now they are “doubling down on their mistake by engaging with the Taliban”. She believes the best way to help is to support the NGOs that have remained in Afghanistan throughout the recent 20-year war.

The Taliban claims they will allow women to return to work and to receive an education, but many Afghans have expressed strong doubts.

In 2018, Ghafari became mayor in an area with widespread Taliban support. She received many threats on her life for being a young woman in power. Despite this, she held her ground, so they killed her father.

Writer Homeira Qaderi says that there are women in roles of power in Afghanistan, but the Taliban Emirate must allow them to work.

“History is full of women who have fought as hard as they could. But women are constantly being trampled on by changing history and politics,” she says.

“In my imagination, I have created a beautiful Afghanistan where men are not the perpetrators of violence.”

Like Humaira Fayazi, Qaderi also believes that Afghans have no chance of fighting off the Taliban, and she too looks to the international community with despondency.

“The world community sold us down the river,” she says.

After over 20 years of perseverance and still the continuation of war, Qaderi is lost for words thinking of ways to improve the current situation. However, she says that the international community should navigate their relationship with the Taliban based on how they treat women.

“We call on the current rulers of the world not to ignore the 15 million women of Afghanistan,” she says.

Afghan women have endured decades of oppression, but through this time, Qaderi says feminism has remained a long-standing tradition. For this reason, Qaderi continues to write and to use her voice, like the many other strong women of Afghanistan.

“We must fight for our rights as we wait.”

Photo: Women’s Day in Dai Kundi Province by ResoluteSupportMedia is used under a creative commons licence and is available HERE

Article: Sofia Jayne is a second-year Bachelor of Media and Communications (Journalism) student at La Trobe University. You can follow her on Twitter @SofiaJayne_.