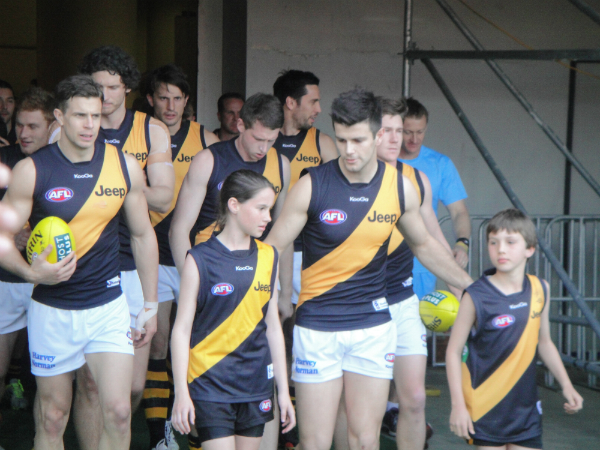 After reaching its first finals series since 2001, many thought 2013 would be a turning point in Richmond’s history.

This was not to be, however, with 2014 proving much bleaker. Although still making the finals, thanks to a remarkable nine-game winning streak, the season finished with a fizzle as Richmond was annihilated by Port Adelaide in the first week of September.

This year hasn’t started with much fanfare either. Sitting at two wins and two losses, questions are beginning to surface about whether this team is really built to challenge for a premiership.

Since 2004, when Brett Deledio was selected with pick one in the National Draft, the Tigers have had a staggering nine draft picks inside the first 12 selections. Despite the hit-and-miss nature of the draft, Richmond would have been hoping for more from these players. A lot of these choices have been solid, including no nonsense-type players such as Reece Conca and Nick Vlastuin who play their role but generally give nothing more.

What Richmond lacks is someone who can break the lines with speed and single-handedly turn a game around, just as Isaac Smith and Stephen Hill can at Hawthorn and Fremantle respectively.

Deledio is arguably the only constant in a team littered with inconsistency. Dustin Martin has shown promise but has had a quiet start to the season, and Alex Rance’s run off half-back is becoming an increasingly pivotal part of the Tigers’ attack and something they simply cannot afford to lose.

At the moment, though, there seems to be too many of the same type of one-paced midfielder who toils away at the contest and lacks outside speed.

While the list management department has made plenty of mistakes, Damien Hardwick shares the burden for the Tigers’ regression. It’s year five for him and the feeling of stagnation around the club remains.

What was so exciting in 2013 was the blistering speed and ferocity that Richmond played with, but this is all but gone. Richmond’s ability to move the ball and its defence was the club’s greatest on-field strength. Ranking in the top five for both points for and against, they had all the hallmarks of a contending team. One of the reasons for this was their use of the ball by foot – the Tigers ranked third for both total kicks per game and their disposal efficiency.

Compare this to 2014, when the Tigers dropped from second to ninth in kicks and jumped from 13th to fifth in their use of handballs. The team appeared to moved away from its run and gun style in an unsuccessful attempt at emulating Hawthorn’s high skill and possession retention style.

Hardwick’s change of game plan came about after their final game in 2013 – the elimination final loss to Carlton. But this switch has so far turned out to be a case of fixing something that wasn’t broken, a problem that falls squarely on the shoulders of the coach. Richmond had all the pieces necessary to challenge, but the loss to Carlton has seemingly changed the outcome of its future.

Mediocrity is never somewhere a team wants to be. Clubs want to be either challenging the top four or down the bottom of the ladder where those tasty draft picks can be found. At the moment, Richmond is neither.

Bogged down in mediocrity, the Tigers are too good for the bottom six but not good enough for the upper echelon. Going on their previous draft record, Richmond’s focus should be on free agency. GWS has a stack of talented Victorian players that haven’t locked in their futures and there is an increasing number of players willing to test the market.

The Tigers have a solid list, one that could have top four potential with just a few tweaks. What they desperately need is an x-factor, but that seems unlikely to emerge this season.

Brace yourself, Tiger fans, this year is starting to have a familiar feel to it.

Daniel Simpson is a first-year Media and Communications (Sports Journalism) student. You can follow him on Twitter: @7danielsimpson.