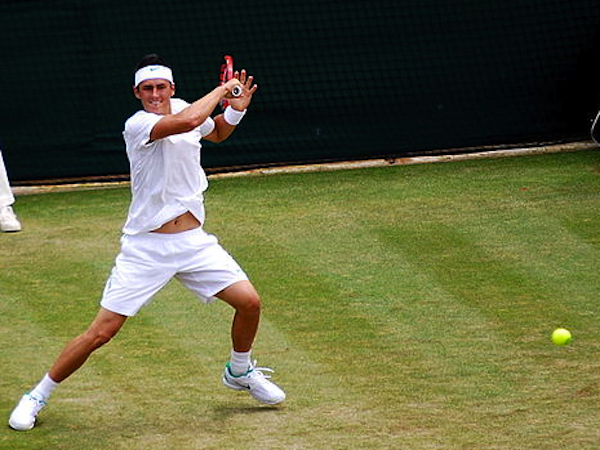 It seems many Australians have lamented the fact ‘the next big hope’ for Australian tennis, Bernard Tomic, has already gone down the path of dislike.

Blame tall poppy syndrome, blame him or blame his father, the young man of only 20 years of age has caused more headlines than he would have liked.

Incidents with police about his bright orange BMW weren’t great, and neither was the revelation back when he was 17 that he snubbed the opportunity of hitting up with Lleyton Hewitt because the veteran was “not good enough.”

Whilst he may be young, it is the attitude of Australian players that often comes under the most scrutiny. Come January, lesser ranked players and wildcard entries are often judged by the Australian public about the effort that is put in.

The likes of John Millman and James Duckworth were celebrated after both played out a combined three matches that went to five sets under the blazing Melbourne sun earlier this summer.

Bernie is remembered for his capitulation to Andy Roddick at the US Open in 2012, where he lost the last of a three set encounter 6-0. He famously asked reporter Will Swanton for his name, and stated “I’ll remember you.”

Sometimes trashed by media and supporters from his home country, Tomic is working hard to regain the faith and support of some of Australia’s tennis public. Ironically enough, the man to learn from is most certainly good enough in this regard.

Bernie is in a similar mould to Lleyton Hewitt at this time in his career. There are, of course, a couple of differences – one stark one being that by the age of 21, Hewitt had won Wimbledon and the US Open.

For Hewitt, controversies were rife when success came knocking. Incidents that involved alleged racism and calling a linesperson a “spastic” were during his early 20s. The public began to take note.

Since then, Hewitt has been on a path of self-improvement, earning the moniker as Australia’s little battler. Australians respect that. With Hewitt, it’s understood that 100 per cent will always be given, despite the opponent, round or time of day.

Hewitt has been modest, open and happy to contribute to Australian tennis in many different ways.  To be noted also is his work in the media, specifically commentating with the Seven Network – it has been superb. On court, his focus has been his fitness and getting his tennis up to scratch. Despite his age and ranking, he is still striving for the top.

After the draw for Wimbledon was released, Tomic found himself on a crash course with the 21st seed American Sam Querrey. Interestingly, Querrey had been beaten by Lleyton Hewitt just a week or so earlier at Queen’s. So Tomic sought out Lleyton and they had a hit, sharing tips and tricks to get past the American. It’s a fantastic step to take.

“If I could take Lleyton as a coach anytime, I would for sure,” Tomic said after the session.

“If you can pick up any information from a guy like this, it is only doing yourself credit.”

Already this year, Tomic might have come a long way since the arrogant antics as a teenager. The controversy that follows him at the moment is related to his father and coach, John – who has been banned from many major tournaments pending the results of the alleged assault of Tomic’s hitting partner in Madrid earlier this year.

One could also look at his response to his father’s ATP ban as a positive. Whilst handling himself very astutely and honestly, it also shows the courage needed to continue with what he thinks is right. He made good points about his father as a coach, he knows him well. Tomic has already stated that he will be looking for an assistant, so a shift of responsibility within the Tomic camp still looks like it might happen.

On the other hand, his father’s impact could be seen as cancerous, and keeping him on board is holding him back. In Bernie’s situation, either way he gets lambasted from one direction or the other.

In conferences, he seems happy to discuss his pitfalls, strong points and brain fades. It’s a long way from “I’ll remember you” of last year.

For now, on top of the current positive change to his attitude, the best thing he can do is win. Beat Querrey, beat (possibly) Blake, and challenge Richard Gasquet in the third round.

Going back to Wimbledon in 2011, he served it up to one Novak Djokovic in the quarterfinals, and the media began to love him. Fans began to jump on the bandwagon.

With some success – and the right attitude change that is currently happening – Bernie, before we know it, could be in our heart of hearts for years to come. Perhaps we will also get to see his fantastic media voice in action on the well-suited Channel 7 soon.

Matt Walsh is a second-year Sports Journalism student currently at Wimbledon. He is on Twitter @MattWalshMedia