AFL great Tony Lockett was inducted into the Sport Australia Hall of Fame in Melbourne on Thursday night. 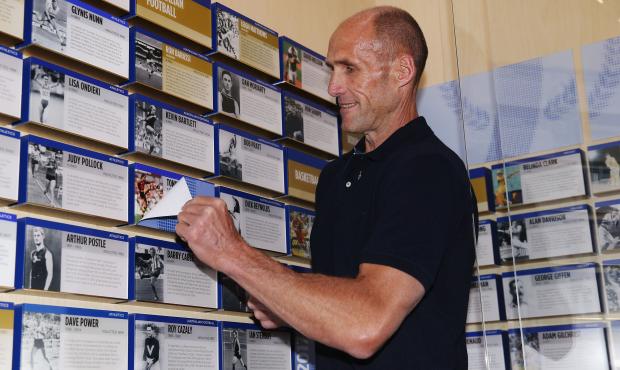 AFL legend Tony Lockett says he is ‘honoured’ to be inducted into the Sport Australia Hall of Fame.

The induction was bestowed upon the 51-year-old on Thursday night at Melbourne’s Crown Palladium, joining an exclusive list of Australians to receive the award.

Lockett, the VFL/AFL all-time leading goal-kicker, was humbled by the award.

Lockett is the first player to be inducted into the Hall of Fame since the competition went national in 1990, transitioning from the VFL to the AFL. Among the other names inducted in years prior include Alex Jesaulenko, John Coleman and Kevin Bartlett.

The St. Kilda and Sydney champion is the only inductee to have played in the AFL era.

“I’m very honoured to be chosen as the first AFL player. Hopefully, it won’t be too long until there is another one,’’ he said.

Other notable Australian sportspeople inducted into the Hall of Fame at the gala event included Steve Hooker, Brad McGee and Lauren Burns.

All inductees were presented with pins by swimming legend Dawn Fraser before the event, as well as plaques to commemorate their achievements.

Lockett, who has served as a forward and goal-kicking coach for Sydney this season, will look to discuss his options for a role next year.

He has enjoyed working with the Swans this year, and Lance Franklin in particular.

“I guess we’ll get together soon and work out what’s going on for next year,” Lockett said.

“Buddy’s quite an incredible footballer and it’s been really good watching him this year. I’ve got a great thrill out of it.”

The induction adds to the list of honours that Lockett has received since retiring from the game in 2002, including being elevated to legend status in both the Australian Football Hall of Fame and the St. Kilda Football club.

“All the awards I’ve won are great but this one is quite incredible so I’m very honoured and very humbled.”