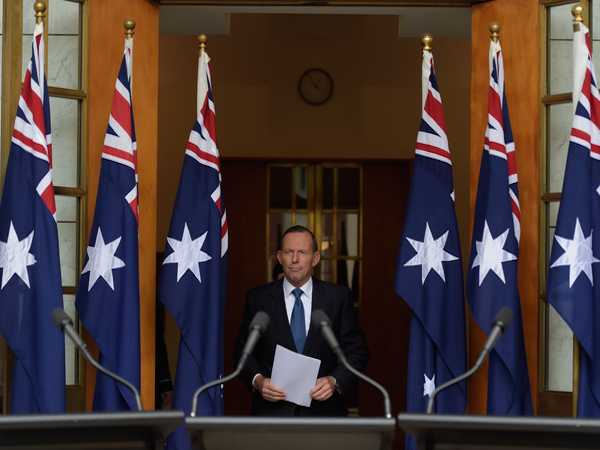 “The adults are back in charge.”

These were the words Tony Abbott spoke on his day of election back in September 2013.

He was taking a thinly veiled jab at the factionalism and squabbling that had rendered the Labor Party electorally impotent.

The ALP had been in a state of disarray since Kevin Rudd – at one point the most popular prime minister since Bob Hawke – was blindsided by his own deputy, Julia Gillard, in an audacious leadership coup in 2010.

Rudd was the first sitting prime minister to be sacked by their own party. Gillard became the second just months before the 2013 election, when the party reinstated Rudd from fears of electoral oblivion.

The internal ructions meant that the ALP were sitting ducks for the Liberals.

The LNP convincingly won the 2013 election, with the coalition’s characterisation of the ALP as mismanaging their own party and more importantly the nation.

Therefore, it’s ironic that this week Abbott has become the third consecutive PM unseated by their own party, a victim of similar internal machinations that helped put him in office in the first place.

Malcolm Turnbull called for a ballot at 4pm on Monday, which culminated in a party room vote that evening. Turnbull defeated Abbott 54 votes to 44, and was officiated as leader just after midday on Tuesday.

Lecturer in politics at La Trobe University, Dr. Nick Barry, tells upstart that Abbott’s legacy will be a mixed one.

“Probably the things he’ll be most remembered for are the ‘stop the boats’ policy and also the repeal of the carbon tax,” Barry says.

“[There’s] also the fact that he was again a first term prime minister replaced before he’d even seen out a full term, I don’t think that’s the sort of thing you want to be remembered for, the short nature of your tenure.”

Barry says that while it’s not unusual for prime ministers to be removed while in office, it’s remarkable how often it’s occurred with first-term leaders recently.

“What’s particularly notable about this one is the fact that it happened in his first term in office,” he says.

“The other thing that’s really interesting is that’s what happened to Kevin Rudd as well, and the idea of that happening in the post-war period at least is pretty much unprecedented.”

Another irony was Abbott’s pursuit of Labor as opposition leader, which cost him the goodwill of the electorate.

The coalition were relentless in their depiction of the ALP as back flippers over Gillard’s ill-fated introduction of the carbon tax in 2011, after ruling out an emissions trading scheme in 2010.

When the LNP’s first budget ran contradictory to some pre-election promises they made, it became difficult to defend themselves from claims of hypocrisy.

“The first budget that they brought down involved quite deep cuts to government spending, waiting periods for unemployment benefits for younger people, [and] moves to deregulate university fees,” Barry says.

“So there are examples of quite significant changes that ran contrary to what they said they’d do prior to the last election.”

“The message was about the need to have these cuts for economic purposes, yet at the same time they also introduced a very expensive medical research fund, also at that point they were planning to bring in paid parental leave as well,” he says.

“Regardless of what you think about those policies, it didn’t fit in all that consistently with the overall message of the budget about the need to cut spending, so there was a bit of inconsistency in that sense.”

It wasn’t just Abbott’s length of tenure that bears similarity with Rudd’s time in office.

Abbott’s tendency to centralise decision making to the PM’s office, which was said to be driven by chief of staff Peta Credlin, has come under fire, just as Rudd’s did in 2010.

Turnbull heavily focused on this in his victory speech, emphasising that his government will be “thoroughly consultative” with a “traditional Cabinet”.

“One of the big things that Turnbull could do is actually follow through on that and actually use Cabinet properly, consult more with colleagues, and move away from this notion of captain’s picks,” Barry says.

“We saw similar criticisms being made actually about Rudd when he was PM, and then under Julia Gillard a shift towards a more consultative approach.”

One parallel that’s not possible to draw between Abbott and Rudd yet, is how Abbott will respond to his deposition.

Almost as soon as he was ousted, Rudd ran a campaign to try and wrest power back, destabilising and undermining Gillard.

Abbott said in his press conference yesterday that “there will be no wrecking, no undermining, and no sniping”.

However, Abbott’s backers could still make life as PM awkward for Turnbull.

“One of the difficulties that [the] Gillard government ran into was destabilisation from Kevin Rudd and his supporters while they were in office,” Barry says.

“If Turnbull runs into similar problems from Abbott or perhaps forces linked to Abbott, that will make things very difficult for him.”

The coalition’s electoral chances now hinge on the factions pulling together.

“It will be interesting to see if that destabilisation occurs or if the party pulls together behind him… in the lead up to the next election,” he says.

“Sometimes the threat of losing office is enough to discipline everybody.”

Tony Abbott’s legacy is already more similar to Kevin Rudd’s than either man would happily admit.

However, Abbott can stamp himself as the bigger man by swallowing his pride and accepting his fate.