The state of Victoria has suffered one of its most traumatic starts to the year in relation to motorcycle fatalities, Deniz Uzgun reports. 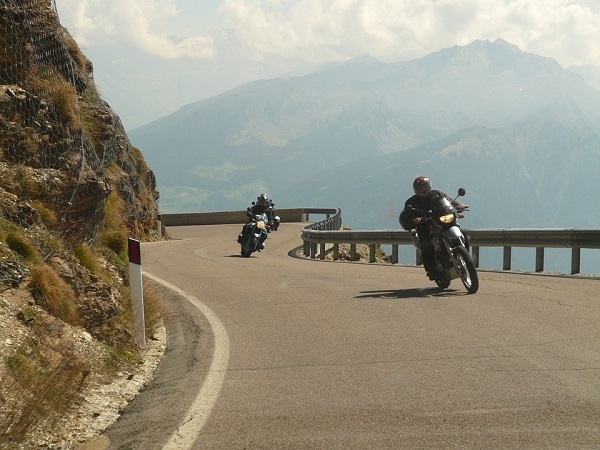 Victoria’s motorcycle death toll is surging, with 28 riders having already lost their lives this year.

In May last year this figure was just 13, with the number of motorcyclists killed during 2015 standing at 30.

Despite the alarming spike in figures in 2016, president of the Victorian Motorcycle Council John Eacott claims that “there has never been a safer time to ride a motorcycle in Victoria.”

Indeed, barring the first 5 months of the year, the general trend in motorcyclist fatalities has dropped in recent decades.

Victoria remains one of the safest states in Australia for two-wheeled road users, despite motorcycle usage steadily increasing each year since 2002 to become the fastest-growing form of transport.

A recent Road Trauma Australia report into road safety describes that between 2005 and 2014, Victoria experienced, on average, an 8.2 per cent reduction in fatality rate in proportion to per 10,000 registered motorcycles. 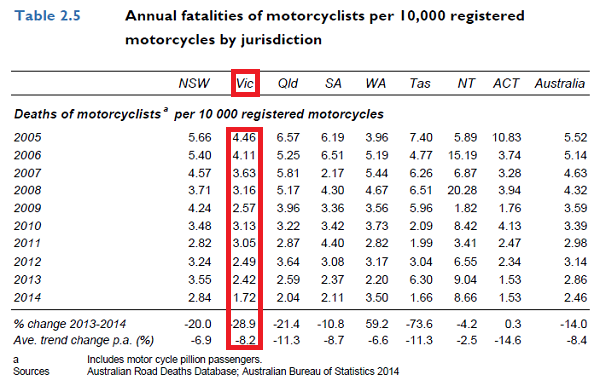 But as the overall trend in motorcycle fatalities drop in proportion to an upsurge in registrations, it is difficult to overlook the tragic reality of the distinctively fatal first four months of 2016.

Damien Codognotto from The Independent Riders’ Group says the “spike in motorcycle & scooter crashes in Victoria in the first four months of 2016 is not normal.”

Motorcycle deaths have increased by 115 per cent since this time last year, leaving road safety experts deeply concerned and in search of answers.

Why has there been such an increase in motorcycle deaths this year?

According to Eacott unlicensed riders and unaware drivers have contributed to the increase.

“One is unlicensed riders who shouldn’t have been on a bike and the other is car drivers failing to see motorcyclists,” Eacott tells upstart.

The Towards Zero website states that almost 25 per cent of the riders killed this year did not hold a valid license.

“So a small improvement in car driver behaviour will generate a significant reduction in all road crash casualties,” he tells upstart.

Dr Trevor Allen from the Monash University Accident Research Centre says that another contributing factor could be the increase in the number of motorcyclists on our roads in the past months, due to the milder than usual weather over summer and autumn.

“It is important to acknowledge that the total number of motorcyclists on the road is much more dependent on the weather when compared to passenger cars,” Dr Allen tells upstart.

“Higher rates of serious injuries typically occur in the warmer months, likely due to more motorcyclists on the road during this time.”

“This can contribute to great fluctuations in road trauma statistics for motorcyclists. So I would expect a pattern of lower fatality rates in the cooler and wetter months of 2016,” he says.

The risks vs. the benefits of more motorcycles on the road

In relation to the rising popularity of motorcycles, Eacott says the government’s increasing perception that motorcycles reduce congestion has meant that more and more riders are on our roads.

The Leuven Study (December 2012) shows that a 10% switch to motorcycles for commuting would reduce congestion by 40%.

But with the objective of reducing congestion, this could also mean that a larger number of ‘vulnerable’ road users are on our roads.

“Motorcyclists are inevitably out in the mainstream traffic without any design or legislative protection, so it could be mooted that we are the most vulnerable in the current state of road use,” Eacott explains.

“The tier of VRU (Vulnerable Road Users) is accepted as being pedestrian, cyclist and then motorcyclist, but the protection given by road rules and road design affords a much greater degree of safety for the first two.”

Motorcyclists are also the fastest travelling of all vulnerable road users, so in the event of a crash, the speeds are likely to be higher leading to a greater risk of serious injury or death.

Dr Allen says it is “very unlikely” the change in lane filtering laws – introduced late last year, which allows motorcyclists to filter through lanes in traffic travelling at 30km/h or less – have contributed to the increase in motorcycle fatalities.

“Drawing conclusions based on a few months of fatality data alone is far from a rigorous investigation, [let alone trying to establish] the effects of a changing rule on road trauma statistics,” he says.

Limitations in recording motorcycle crash data can also make it challenging to pinpoint the causes of these accidents.

“I would say the challenges in reconstructing motorcycle crashes is greater than for passenger car crashes,” says Dr Allen.

“Firstly, there is rarely objective data available from the motorcycle to help reconstruct the crash – such as data loggers which can provide basic speed, time and g-force data near the crash event.

“Secondly, evidence at the scene is often limited, including debris or skid marks. The motorcycle can behave in a greater range of ways during a crash event, including being airborne or sliding with no wheels in contact with the road, making reconstruction difficult,” he says.

“And finally, about two-thirds of injury crashes involve another driver, and obtaining information from the other road user for research is very difficult due to privacy laws, research ethics, and the reluctance of drivers to share their perspective.”

Despite the Transport Accident Commission’s $1 billion investment into the Safe System Road Infrastructure Program – which aims to reduce the Victorian road toll by more than 30 per cent to below 200 deaths per year – the spike in motorcycle deaths brings Victoria’s overall road toll to 107, compared to 96 for the same time last year.

The assistant police commissioner Doug Fryer has warned that with this current rate, the number could exceed 300 by the end of the year for the first time in 6 years.

For the motorcycle road toll, Dr Allen says that even if the current rates subside for the rest of the year, we are likely to see the “highest annual fatality in at least 15 years.”

In light of this year’s rising road toll, the Shine a Light Road Safety Campaign kicked off last Friday, aiming to bring awareness in reducing deaths and injuries on our roads as well as raising money to support those affected by road trauma.

On Sunday May 15, a community walk will take place in Mount Waverley with the aim of shining a light on the lives lost and to help curb what has been a horrific start to the year on our state’s roads.