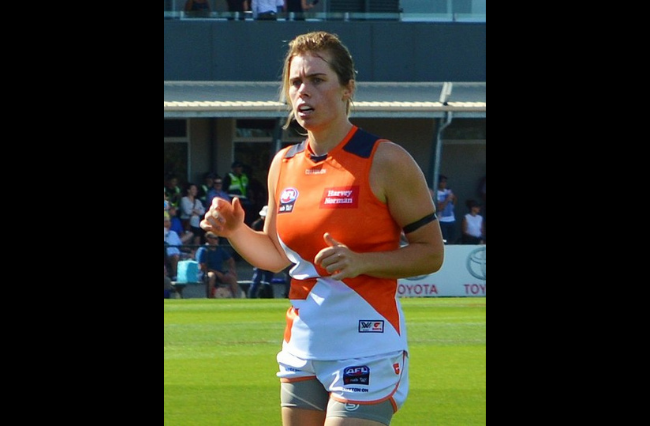 The Australian sports community is in mourning after news that multi-sport athlete Jacinda Barclay, 29, died on Tuesday.

Barclay was a star across a number of sports, including Aussies Rules, baseball, and American football.

She played as a key forward with the GWS Giants in the AFLW, represented Australia in five Women’s Baseball World Cups and won a championship in her first year playing quarterback in the Legends Football League in the US.

Barclay was drafted by the Giants in the 2016 AFLW Draft at pick 65, playing 23 games and scoring 11 goals.

GWS released a statement on Wednesday morning saying: “The Giants are deeply saddened by the passing of AFLW player Jacinda Barclay.”

Giants Chief Executive David Matthews said she was a much-loved member of the club and they are devastated.

“Jacinda gave up a great deal to follow her sporting dreams around the world and we are grateful that she called our club home for four years,” he said.

“As an inaugural GIANTS AFLW player, Jacinda was a vital part of our club. More than that though, Jacinda’s spirit and infectious personality made her a popular and unforgettable member of the GIANTS family. She will always be a part of our club.”

The GIANTS are deeply saddened by the passing of AFLW player Jacinda Barclay.

The Perth-born athlete excelled in baseball as a child, playing in all-boys teams growing up. She won a World Cup silver medal as well a bronze medal with the Australian baseball squad after making her national team debut at just 15 years of age.

While living in the US she got into American football, which would lead to her later being scouted by the Chicago Bliss in 2016 where her pitching background made her an effective quarterback.

She said that Aussie Rules was always her first love, but with no professional league available to her in Australia when she was younger, she put her focus into baseball, before opportunities in other sports emerged.

“Jacinda made a significant contribution not only to our sport over a long period of time but a number of other sports, on and off the field.

“We are deeply shocked and saddened by Jacinda’s passing and the loss of a member of our tight-knit baseball community.”

We are deeply saddened by the tragic news Jacinda Barclay has passed away.https://t.co/sXwCewj4Y1 pic.twitter.com/X26F39kdBV

Tributes flowed to social media, from friends and former teammates.

Chicago Bliss LFL teammate Steph Mur took to Instagram, saying: “The news is devastating and our hearts are breaking.”

“Jacinda lived a life that most people could only imagine. She was an elite multi-sport athlete constantly shredding boundaries around the world.”

The news is devastating & our hearts are breaking 💔 Jacinda lived a life that most people could only imagine. She was an elite multi-sport athlete constantly shredding boundaries around the world. She was every coach and players’ dream- a fearless leader full of positivity, vast knowledge, eagerness to grow, & dedication to every team member. More importantly, she was an all-around badass person. I feel honored to have played alongside you & more importantly to have known your beautiful energy & bubbly, comedic personality. Your brightness will never stop shining in our hearts. Rest easy Cinda! To my Bliss family- I love you & will always be here for you. Never forget that 🧡💙. #ChicagoBliss #Bliss4Life #BlissBliss #ThatsMyQuarterback

Photo: Jacinda Barclay during the round 1, 2018 AFL Women’s match between Melbourne and Greater Western Sydney by DustyNail available HERE and used under a Creative Commons Attribution. The image has not been modified.