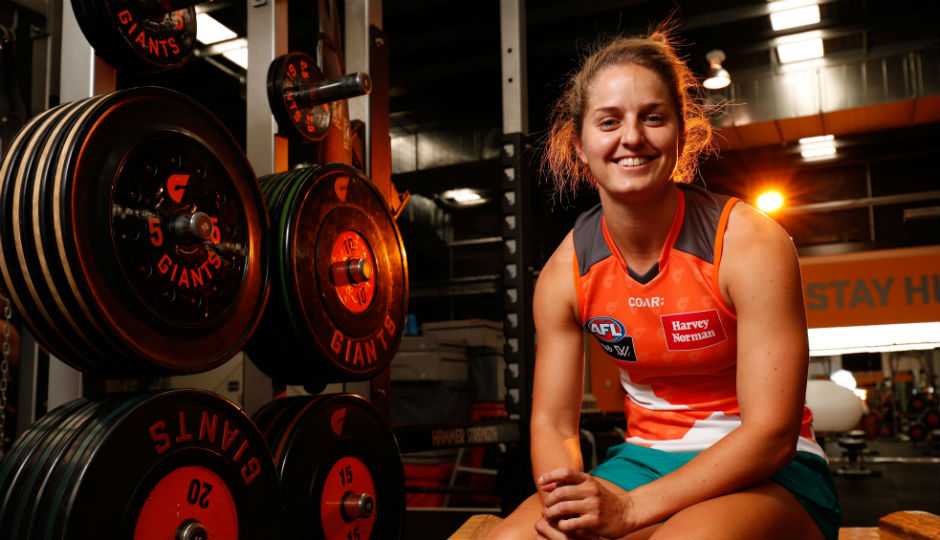 The infectious laugh, paired with her hard working and her humble personality hides all that she has achieved on the sporting field.

In January, Brush was one of 10 defenders short-listed for the W-League Team of the Decade, a feat that was thoroughly deserved.

Now co-captaining the Western Sydney Wanderers, few players would have given more to a single club than what Brush has to Canberra United. Solid at the back, her leadership drove the club to two championships and three premiership wins.

Along with her strong playing history with the round ball, as a youngster, Brush loved her AFL.

Influenced by her father who has strong links to the Melbourne Football Club, Brush thrived on the opportunity to play in school carnivals and kick around with the boys.

She grew up with the mindset that girls didn’t play football, so it wasn’t until the introduction of the AFL Women’s competition that her childhood dream became a reality.

Suitably known as ‘Brushy’, she’s always been a perfect role model for aspiring sportswomen, but now more than ever, the 29-year-old is inspiring young athletes across the country.

“Everyday you get to see the fans — little girls come up to you and ask you for your autograph — knowing that they can one day aspire to play AFL professionally,” Brush tells AFLPlayers.com.au

“Playing a tiny role in that, that’s the most rewarding part for me.”

In 2008, she was named as the foundation captain of Canberra United in the W-League’s inaugural season. She would go onto become a hometown hero and the first player in the club’s history to reach 100 games, captain her side to premiership success and represent the Matildas.

Last year, nine years on from her debut season in the W-League, Brush again etched herself in the history books, participating in the inaugural season of the AFL Women’s competition with the Greater Western Sydney Giants — a sport that she’s had an unwavering passion for since she was a child.

“I heard about the talent ID draft testing they were doing in March 2016, so I drove up to Sydney from Canberra for the day and went through a testing process,” she said.

“They knew I was heading overseas to play soccer in America, so I could no longer be involved in any academy sessions throughout the year, but I got an email from Tim Schmidt asking if I would like to be apart of the Giants, so I must have done alright.”

The Giants registered one win in the competition’s first season, where Brush featured in six of a possible seven games.

In 2017, the dual-sport athlete made the decision to move to Sydney to further her AFL career. Her commitment to playing two professional sporting codes saw her move from Canberra United to the Western Sydney Wanderers for the 2017-18 W-League season.

“The highlight from last season was definitely our win,” Brush recalled.

“That was pretty amazing to achieve together because we were a team that tried really hard but were just missing a few key things.”

Brush has credited her smooth transition into AFL to her extensive football career, which saw her play professionally in Australia, Norway and America.

“It really hasn’t been too tough,” Brush explained.

“The sport is more physically demanding than soccer, especially the pre-season, but having that history in another physical sport has made the transition a lot easier.

“I think a few members of the team got slightly overwhelmed for our Round 1 and 2 matches when the crowds were massive — they were a bit anxious on the day — and maybe that affected their performance. I have been able to use a lot of what I’ve already experienced in soccer to deal with those elements, and hopefully I’ve been able to help my teammates.”

Brush is quick to downplay her sporting achievements, but when it comes to her support groups she is full of praise and recognition.

The support of her coaches, teammates and medical staff at both clubs has ensured that her code-juggling exploits have been as seamless as possible.

“I’m so privileged that both teams have been so understanding in allowing me to do that because I’m sure there are coaches out there that would say, ‘it’s us or nothing’.”

Brush’s message to aspiring athletes is to play as much sport as possible, for as long as possible.

She credits her successful soccer career for the key skills she learned as a child participating in all kinds of sport, including football, cricket and dance.

Sport has always played an integral role in her life and she wouldn’t have it any other way but admits that life as a professional female athlete is challenging.

“It’s pretty difficult that neither sport is fully professional so we need that second job to get by — which in my case happens to be another sport,” she added.

“We are certainly heading in the right direction, next year I won’t be able to do both, which is partially because of the physical strain but also the growing commitment required.

“At the end of the day, you don’t do it for those reasons, you do it because you love it, otherwise I would have quit sport a long time ago. I have two pretty cool jobs and I wouldn’t change anything.”

Success often entails sacrifice, something that Brush has become very familiar with — the last time she had a weekend off was six months ago in August of last year.

“It’s the things outside of sport that you sacrifice. It’s such a tough gig for my partner and I that we don’t see friends as much as I’d like to, and I’m sure mum and dad would like me to call them more,” she said.

“Everyone in the team has made massive sacrifices for AFLW — it’s all worth it at the end of the day as long as you maintain those relationships and make it work.”

Many athletes fear life after sport, but Brush is certainly not one of those as she embraces the prospect of a career in physiotherapy and an opportunity to enjoy the little things in life.

“I’m a physiotherapist outside of sport, so I still keep my hand in the pile a little bit by working two days a week,” she explained. “I’m fortunate that I have physio to fall back on, and that I was able to complete my studies while still playing in the W-League.

“Life after sport will include family, travel and the simple things. I’m not scared of retirement at all, maybe the opposite. Maybe it’s the chance to live a normal life.”

Yana Kyparisis is a third year Bachelor of Media and Communication (Sport Journalism) student at La Trobe. You can follow her on twitter @Yanakyparisis

The ‘Triple Threat’ series is an initiative of the partnership between the AFL Players’ Association and La Trobe University. Stay tuned as La Trobe sports journalism students help tell the stories of some of the game’s most talented athletes.