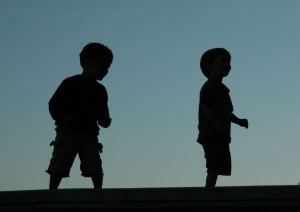 It recently became news that several schools in the UK have banned kids from having best friends. Stating that this will stop kids from feeling upset when they have a fall out with someone, the kids are instead encouraged to play in large groups.

But what about the important lessons that friendship teaches us? Parenting expert Dr Michael Carr-Gregg fears that the next step will be the banning of hugging and doing somersaults. He explains that the ability to maintain, form and keep a friendship is a crucial developmental task, where children start emancipating themselves from their parents.

The attempt of ‘saving’ the children from potential fallouts with friends deprives them of important lessons. ‘Loss and grief define us as we grow up. These things will prepare kids for their lives, and this ban will surely do the opposite,’ Carr-Gregg explains.

The parenting expert also questions the possibilities of policing this. Children are usually at school for seven hours a day, which leaves 17 other hours where they can form friendships. 60–90 percent of kids socialize online, making it very difficult to implement this ban completely.

The Objective Standard addresses the news, pointing out the disturbing coincidence of the ‘best buddy ban’ resembling Ayn Rand’s dystopia ‘Anthem’. In this novella the collective community has crushed individuality to the degree that the word ‘I’ has been eliminated from the language, and the preferences among friends have been forbidden.

The main character of the book, Equality 7-2521 goes on to fully embrace individualism and to see preference in friendships not as a transgression but as a reflection of his deepest moral and personal values.

Rand believes that no matter how hard society tries and how many people it kills in the name of collectivism, the individual will still rise up and declare him or herself his or her own purpose. If we transfer this idea to the ‘buddy ban’ issue, the schools are not going to be very successful.

Growing up we need to scrape our knee once in a while, we need to send our pets to a ‘farm’ when they’re getting old, and we need the lessons that friendship teaches us! Children need to form their individuality, and encouraging them to play in large groups rather than mirroring themselves in their closest friends, will result in confusion amongst the kids as to their position in the crowd.

I believe that my best friend taught me great things about life, and I wouldn’t be the person that I am today without having experienced the different aspects of this friendship – the good and the bad.

I fear that this ban will keep children from learning how to take care of others and investigate themselves completely in friendships. The bonds of a friendship show us how to make compromise, and the importance of not always putting ourselves first – lessons that are crucial to individuals being part of a society.

Anne Nielsen is a third-year Bachelor of Media Studies student at La Trobe University. She is currently on exchange from Aarhus University, Denmark, and is upstart’s deputy-editor. You can follow her on Twitter @AnneRyvang.