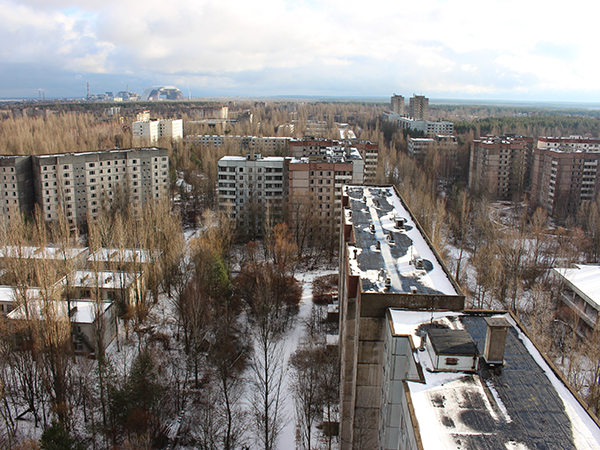 Ukraine is looking to turn land around Chernobyl into a solar farm to reduce energy dependence on Russia, thirty years after an explosion at the nuclear power plant.

1,000 MW of solar and 400 MW of renewable energy could be generated on unused land in the 1000 kilometre exclusion zone, the Ukrainian government said in a presentation to major banks.

“There has been a change in the perception of the exclusion zone in Ukraine,” the government’s presentation said.

“Thirty years after the Chernobyl tragedy [it] is revealing opportunity for development.”

The European Bank for Reconstruction and Development is prepared to fund part of the plan if the investment is viable, and environmental risk is tackled to its satisfaction.

They are concerned about the radiation that emerged from the explosion on the 26th of April 1986, when a spike in power ruptured the fourth reactor of the nuclear power plant.

Two people died in the blast, and 29 died in hospital, but the long-term impact is unknown.

115,000 are estimated to have been evacuated from Ukraine, Belarus and south Russia soon after the incident, with a further 220,000 relocated until 2000.

Many refused to leave, or returned, to the ghost town that is now being considered for the development.

“Ukraine is turning toward Europe, and long term integration in Europe, and with the European Union encouraging renewable energy, it is sending a political stance about their desire,” he tells upstart.

“It is [also] designed to reduce Ukraine’s energy dependence on Russia, and make Ukraine less vulnerable to Russia.”

Ukraine, Belarus, Italy, Turkey, Hungary and Germany, import gas from Russia, through a line in Ukraine and Belarus.

“It [natural gas and oil] is used as a political lever in conflict,” Horvath says.

Russia cut gas to Ukraine in June 2014, after complaining about an estimated unpaid debt of $5.3 billion.

Russia also cut supplies in the winter of 2006 and 2008-09, disrupting the Eastern European gas market.

The latest cut coincided with increased conflict between the government in the Ukrainian capital of Kiev and pro-Russian rebels in eastern Ukraine, after the annexation of Crimea in March 2014.

However, western sanctions imposed over Russia’s involvement in Ukraine, and fluctuating energy prices, are threatening the country’s status as an energy superpower.

“The price of hydro carbon is very, very low, and it’s having a devastating effect on Russia’s economy,” Horvath says.

“Western sanction is [also] making it harder for an energy corporation to access new technology to expand production.”

Horvath says its difficult to predict Russia’s next move.

“I mean, when their fighter jet was shot down by Turkey, war was likely, and now look what’s happening, they’re reconciling.”

Sheridan Lee is a third year journalism student at La Trobe University. You can follow her on Twitter here: @sheridanlee7.