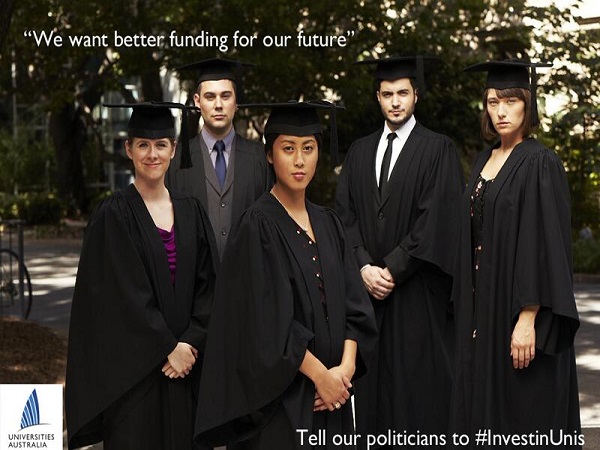 The Australian Federal Government’s plan to cut over $2 billion of funding to universities in order to bankroll school reform has again come under fire.

1,007 professors from public and private universities from all around Australia have signed an open letter urging the Prime Minister to rethink cuts to tertiary education. The letter was published in 18 newspapers around the nation last week.

While the letter did discuss the negative economic and social impacts cuts to tertiary education can have on the country’s future, it also argued the cuts would be disadvantageous to Australia on an international stage.

“Funding cuts could be risky to Australia’s tertiary education sector,” she said, “it would mean we won’t be able to remain competitive.”

The letter stated, “universities are central to Australia’s growing relationship with the Asia Pacific region and the wider globalised economy”.

Universities engage actively with the international tertiary sector and international governments. According to Ms. Stinson, exchange programs and teaching partnerships help create strong bonds with many people and institutions abroad.

Higher education is responsible for significant contributions to the country’s economy; tertiary education is Australia’s third largest export behind coal and iron ore. Data from the Australian Bureau of Statistics shows international university students generated 16.3 billion in export income from 2010-2011.

“International students not only contribute billions of dollars to the communities they live in, but they also bring vibrancy and diversity into our communities and classrooms,” said Ms. Stinson.

“Funding cuts will mean different universities will have to adjust in different ways to cover the costs,” she added.

Cutting such a large amount of funding will force universities to try and find other methods of saving costs, whether they be job cuts, increases in class sizes, discontinuing courses or reducing research grants.

The letter also pointed to the fact that the government’s public university investment is well below the Organisation for Economic Co-operation and Development (OECD ) average, of which Australia is a member.

Australia makes a huge contribution to international tertiary education and is seen as an attractive destination to international students. According to Universities Australia, the country’s university system is ranked eighth globally, but when it comes to government funding in advanced global economies, Australia falls to ranks 25th out of 29, and therefore risks falling behind. They have therefore launched a campaign to call for increased funding to universities.

The letter from professors also argued against cutting over $500 million in research grants. It states insufficient funding will “erode” research potential and therefore teaching quality.

Cutting research funding will make it tougher to compete in areas of innovation like engineering, technology and medical research. Australia’s competitors in the developing world are looking at research investment through universities as a priority. Universities Australia states China spent $130 billion in 2006 for research, and this number continues to grow. Governments in India, Singapore and Brazil are also said to be making large investments into research.

Ms. Stinson also pointed out that world university rankings like the ARWU put great emphasis on research and publications when considering universities.

Mr. Emerson also stated that investment will continue despite the proposed reforms.

However, the letter from the NTEU stated the “government has taken over $4 billion out of the Federal Budget allocations for universities”.

Zainab Hussain Shihab is a Bachelor of Journalism student at La Trobe University and a staff writer for upstart. You can follow her @ZainabShihab