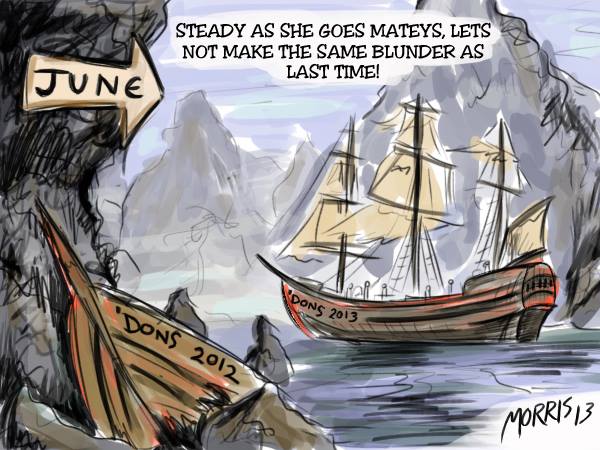 Essendon supporters will be well aware of the Bombers’ record in June over recent seasons.

Since 2010, Essendon has played 11 games in June, and emerged victorious just once – against Fremantle at Patersons Stadium last year.

The “June curse” has been emblematic of Essendon’s mid-season downfalls in recent times. The Bombers started the 2011 and 2012 seasons brilliantly before falling out of the top four, and failing to make any impact in September.

The year so far has seemingly been almost a carbon copy of the last two. Essendon was undefeated heading into round seven, but has since lost three of its last four matches.

While last year’s dramatic slide down the ladder still lingers in the minds of Bomber fans, the differences between this season and last outweigh the similarities.

The most glaring difference is the welfare of the playing group. Currently, Michael Hurley, Courtenay Dempsey, Ben Howlett, Dyson Heppell, Scott Gumbleton and Leroy Jetta are all on the injury list, but there’s a possibility they could all play against Carlton on Friday night.

Even the most casual football follower would remember the Bombers facing a much more dire set of circumstances this time a year ago.

A mostly fit playing list has meant Essendon has fielded a much more settled outfit each week.

This is no more evident than in the back half of the ground, where the Bombers – for the first time in recent memory – have an established back six. Fringe players such as Kyle Hardingham and Tayte Pears have fallen by the wayside, while the versatile Michael Hurley has finally found a permanent spot in the forward line.

In an age where players are rotated off the ground more than ever, the best teams still have the same six players lining up in defence each week. As a group, the Bombers’ backline continues to improve.

Jake Carlisle and Michael Hibberd could be in line for All-Australian nominations by years end. Previously maligned defender Cale Hooker is having his best season to date, leading the competition in intercept marks and intercept possessions.

Courtenay Dempsey has provided plenty of dash off halfback, while Mark Baguley has held his own against the best small forwards on offer. For the first time in years, the Bombers don’t look like they’ll be in absolute disarray when veteran Dustin Fletcher finally retires.

In an interview earlier this year, Jake Carlisle outlined the aim to restrict sides to no more than eighty points per game. On average, the Bombers are conceding 81 points per game, so they’re not far from that goal.

It’s a huge difference from last year’s average of 95 points per game, or 100 points in 2011. In fact, the Bombers haven’t been able to limit teams as effectively on the scoreboard since 2000 – their last premiership year, in which they conceded an average of 80 points per game, and lost just one match for the season.

The saying “offence sells tickets, but defence wins premierships” is as true in AFL as it is in any other sport – last year’s grand final between Hawthorn and Sydney being the most memorable recent example.

In previous years, Essendon has been an exciting team to watch, but has always seemed much more adept at attacking than defending. Finally, this is beginning to change.

But it would be foolish to attribute Essendon’s success in restricting opposition scores purely to its defenders. While the Bombers are ranked sixth in the competition for total tackles, this doesn’t accurately reflect how good their pressure has been across the ground.

Essendon ranks third in the league in tackle differentials – that is, on average only two sides have out-tackled their opponents better than the Bombers.

The disparity between Essendon’s tackle and tackle differential ratings can be put down to the Bombers’ ability to retain the ball. They rank first in the league in kicks and third in marks. They’re also one of only two sides – the other being ladder-leader Hawthorn – to be ranked in the top four for both contested and uncontested possessions.

It wasn’t long ago Essendon’s midfield seemed impotent when captain Jobe Watson wasn’t dominating. While Watson is having another outstanding season – averaging just under 30 possessions per game thus far – the skipper is receiving plenty of support from teammates.

The 2011 Best and Fairest winner David Zaharakis missed much of last year, and his inclusion has been significant so far in 2013. Brendon Goddard has added class and skill to the midfield since coming across from St Kilda.

Meanwhile, Dyson Heppell and David Myers have become permanent fixtures in the midfield this season, after serving apprenticeships on the half-back line. That makes four quality midfielders who weren’t there this time a year ago.

With all this in mind, we can address the elephant in the room. Well, not that elephant, which nobody seems to be able to explain just yet, but the on-field one.

Despite all the signs of improvement listed above, the Bombers have lost three of their last four games. Essendon can probably be forgiven for falling short against reigning premier Sydney on Saturday.

Similarly, Essendon fans didn’t lose too much hope when the Cats dismantled the Bombers in round seven.

It’s the loss to Brisbane, amidst those other results, that really sticks out as a match Essendon simply shouldn’t have lost. After the match, some remarked, “top four sides don’t lose games like that”.

Indeed, if the Bombers had won that match, they’d still be in the top four. But, history shows top four teams generally do lose a game like that each year.

Last year for example, grand finalists Hawthorn and Sydney both lost to Richmond, who finished the season in 12th spot. Collingwood lost to 10th placed Carlton twice last year, while Adelaide lost to Brisbane – who wound up in 13th position.

The key, obviously, is to not lose too many of these types of matches.

Essendon seems as likely as anyone to claim the last spot in the top four. And, as we’ve seen any number of times in recent years, once you finish in the top four, anything can happen.