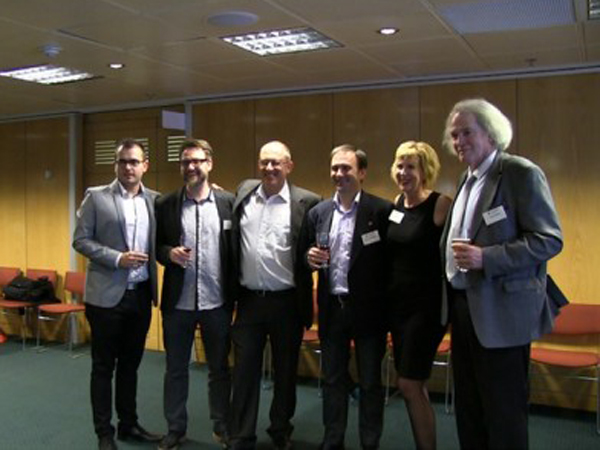 It was a night of celebration on Thursday evening as former upstart contributors, journalism graduates, staff and the current upstart editorial team met at the Victorian State Library to celebrate the foundation of upstart magazine five years ago.

Since its foundation by La Trobe’s journalism department back in 2009, upstart magazine has served a crucial role in providing an avenue for emerging journalists to get their work published over the past five years as well as reporting on the changing role of journalism in a new media landscape.

To commemorate the evening, Dr Lawrie Zion, Paul Tatnell, Nick Richardson and Erdem Koç were on hand to give a speech about upstart’s achievements over the past five years and what the future holds for the publication.

Zion, who co-founded the publication with Chris Scanlon back in 2009, said the magazine had come a long way from its early origins and had managed to prove doubters wrong.

“I think it was one of the unkind reports in the student paper Rabelais who told us it was a place where assignments would go to die,” he said with a laugh.

“But I think five years on, the fact we’ve got a business model where we’re a part of the university, we’ve long gone past a million page views, we’ve got 5 thousand people following us on Twitter and I think it’s clear from the reaction of people doing the subject, Online Editing and Publishing, where up to 15 students every semester work together on editing the publication, that we’ve hit on something that gives students a great deal of practical experience during their time at university.”

Herald Sun news editor and La Trobe journalist graduate, Paul Tatnell, praised how the degree had progressed since he graduated ten years ago and emphasised that emerging journalists needed to pay attention to detail and take their stories further which is what upstart provides with its feature length articles.

He also stressed upstart should be looking to move into the area of breaking news stories in the future.

“I still cannot understand why students don’t break more stories, students are a part of massive university communities, they are more social than most of the population, they live normal lives like the rest of us in hairdressers and shopping centres and stuff, and probably their witnessing on Saturday nights would make good yarns,” he said.

“Students are constantly in the area and neighbourhoods where breaking news happen, I just think that they need the confidence to know what they feel and think and turn that into good stories.”

Nick Richardson, Special Projects Editor with the Herald Sun and an Adjunct Professor of Journalism at La Trobe, supported Tatnell’s comments that upstart should push to break more stories and praised upstart for the skills it develops and said that it is “exactly the same skills that we are looking for in the main media”.

Erdem Koç, who served as upstart’s initial editor in 2009 whilst he was studying at La Trobe, said that upstart was all about learning outcomes for students.

“It’s all about the learning outcomes for me and upstart as a publication, rather then where we sit in the wide world of journalism,” he said.

“I’m not so sure we should be breaking news or not, it’s very interesting to hear Paul and Nick say that. I think it’s road we should maybe go down in the future.

“The last 12 months upstart has been at its absolute best, I think, both in terms of numbers and the hits that we’ve got but also the two big projects which Lawrie (Zion) alluded to earlier in the night.

“That was of course the federal election, which involved 10 students working every single day coming up with story ideas and I think that’s where we need to go in the future – covering big events.”

To watch a review of the night, and interviews with former and current upstart members, head to the link below. For further information on how to submit articles to upstart, you can visit our style submission guide here.