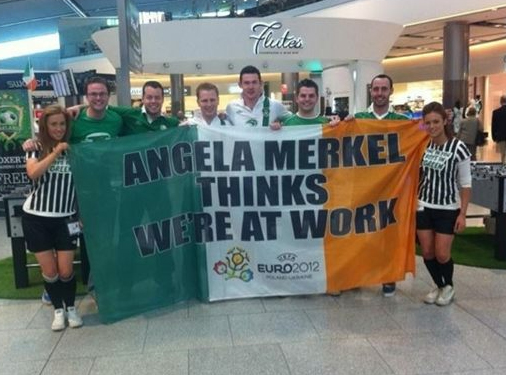 While the Boys in Green are struggling, the Irish fans are winning off the pitch (image: Eric Lalor via Lockerz)

Germany had beaten Portugal 1-0 in its Group B opener in Lviv, but its celebrations were short-lived with UEFA announcing fines against the country’s football association, after supporters threw screwed up paper at Portugal’s players during some corner kicks.  They also let off a smoke bomb in the stands.

Portugal on the other hand also faces disciplinary action over a delayed kick-off to the second half.

The two teams will now hope to put this behind them and focus on their second matches in this group.

Germany can book a place in the quarter-finals if it beats the Dutch tonight.  Victory or even a draw may be enough.  The Dutch, on the other hand, must win to stand any chance of remaining in the competition.

MUST-SEE:  Even though the Irish took a 3-1 beating from Croatia, their fans have managed a few wins in banner-making.  Check it out: 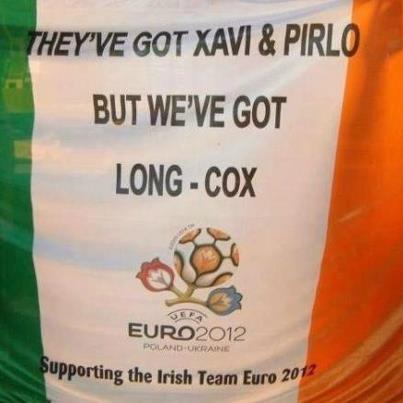 REASONS TO WATCH: Denmark’s surprise win over a disappointing Dutch outfit has blown Group B wide open. Tonight’s matches are of the utmost importance, as two teams fight to proceed and two fight for survival. Expect the unexpected in what should be two tight competitive matches.

REASONS TO NOT WATCH: Arjen Robben’s often frustrating style may have rubbed off onto his teammates, watching the Dutch miss an endless amount of opportunities was almost comparable to Chinese water torture. At least Germany knows how to score.

Netherlands vs Germany: Time and time again against Denmark the Dutch wasted opportunities in front of goal. The usually clinical finishing of Robin Van Persie, was anything but, as Netherlands paid the ultimate price for wasting countless chances. Now they find themselves up against a very talented and exciting German team, needing at least a draw to give themselves a chance of proceeding.

The Germans on the other hand, can guarantee themselves a spot in the knockout stages if they can overcome the boys in Oranje. These are arguably the two best teams in this group and it should make for a riveting match, but with the Dutch having the yips in front of gaol whilst Mario Gomez takes almost every opportunity that comes his way, it is hard to see the Germans losing. They should get the win (1-0).

Denmark vs Portugal: Michael Krohn-Dehli’s strike in the 24th minute against Netherlands has thrown the ‘group of death’ into disarray, but more importantly it has put Denmark within reach of surpassing the group stage. Even though the opposition missed opportunities, the Danish were rewarded for being brave, they dared to play toe-to-toe with the Dutch and it paid off. Portugal on the other hand pushed the much-fancied Germany to the very end, perhaps Portugal deserved a point for their efforts, but the loss might inspire them to fight tooth and nail for a win tonight. If both teams can provide repeat efforts of their first-round matches then we should be in for a cracker. I’d expect Portugal to be playing a very attacking brand of football in this one, while the Danish can try to catch them on the counter. Portugal to win (2-1)

Jake D’Amato is a third-year Bachelor of Journalism student at La Trobe, and is part of upstart’s EURO 2012 team.  Follow him on Twitter @jdamato32.