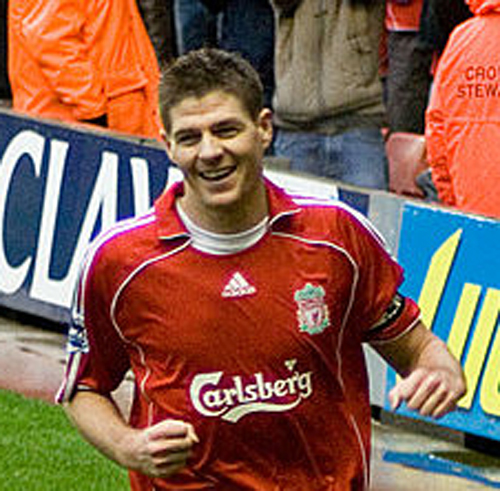 This England squad is arguably the least hyped Three Lions side in recent memory. So here at upstart, we’ve decided to get the hype going! Football’s coming home! Uncle Roy is the savior! Stevie G can perform for England! France, Ukraine, Sweden? Easy…

England kicks off its campaign tonight against France, in what should be the biggest clash of Group D.  Frank Lampard has limped home injured, which clears any possible tension between himself and captain Steven Gerrard. Now that Gerrard is England’s sole attacking midfielder, the stage is set for him to be given the free role in the middle that he enjoys (when fit) with Liverpool, and can gallivant between the two penalty boxes. Gerrard has proven his class on countless occasions for Liverpool, and now is the time for him to truly step up and dominate in an England jersey.

The last time England and France met at an international tournament was EURO 2004, in which a sloppy back-pass from Gerrard gifted Thierry Henry a penalty, which was duly slotted away by Zinedine Zidane in injury time and the French went on to record a 2-1 victory.  Expect to see another close encounter at the Donbass Arena.

Just as noone expected Denmark to sneak a 1-0 win over the much-fancied Dutch, perhaps England could sneak all the way to the EURO title…

EYEBROW-RAISER: England manager Roy Hodgson explained that Rio Ferdinand’s exclusion from the side was due to him being too good to sit on the bench…

BALOTELLI WATCH:  The hype around Super Mario continued, as he continues to be singled out as Italy’s key attacking weapon. Yet manager Cesare Prandelli said that he still needs to learn the power of team work. ‘He can’t just think about how he can be important to the team, he must understand that being generous to the team can be an extra weapon for us’ the Italian manager said.

While he’s yet to blow up the team hotel or get stuck in a bib again, have a listen to Manchester City’s fans’ song for him. And remember it. Then annoy friends and colleagues with it:

REASONS TO WATCH: INGERLUND! Hearing the English sing is always a fantastic experience. England is like football’s soap opera – it is the most dramatic, passion-fuelled and doomed to fail side in the world, thus not worth missing.

REASONS TO NOT WATCH:  Returning to work or school after a long Queen’s Birthday Weekend can be even harder after staying up till the wee hours of the morning. Weak excuse really. Or, the infomercials on TV4ME are just too good to ignore. AB-Circle Pro anyone?

TONIGHT: England plays old foes France. The two have a colourful history, and are both favourites to progress to the Quarter Finals. The French have strongly re-built under Laurent Blanc, and are one of the tournament’s dark horses. Franck Ribery remains a key attacking threat, while Hugo Loris is growing into one of Europe’s top keepers. England are without the suspended Wayne Rooney, which may prompt manager Roy Hodgson to start either Andy Carroll or Danny Welbeck up front as a sole striker. England should get off to a better start than at the 2010 FIFA World Cup, and a draw would be a decent result against the French (2-2).

Tonight’s other match sees co-hosts Ukraine play Sweden. Ukraine should benefit from their home supporters, and overpower the Swedish. Expect both an array of tricks and an inevitable dummy spit from Zlatan Ibrahimovic, and a dream goal from national hero and captain Andrily Shevchenko to give Ukraine the win (1-0).