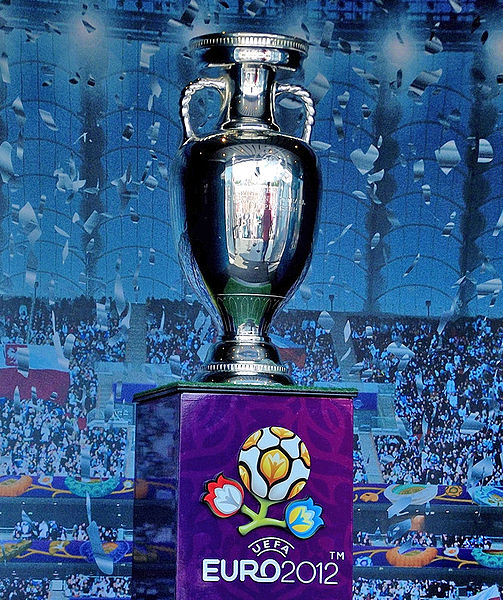 Will it be Spain or Italy who lift the Henri Delaunay trophy tonight? (image: Piotr Drabik via wikimedia)

Up until the semi-finals, the Germans were arguably in better form than both Spain and Italy. While Spain were not completely convincing against Portugal last week, Italy look to be hitting their straps at precisely the right moment.

On June 10 these old European rivals met in their first of three Group C encounters. At one goal apiece, the points were shared thanks to a Cesc Fabregas equaliser for Spain which closely followed Antonio Di Natale’s inspired finish.

A draw left both teams with work to do before consolidating a place in the knockout phase. The Spanish then made light work of the Republic of Ireland, a 4-0 drubbing exemplifying the abundance of class and depth Vicente del Bosque has at his disposal.

The Azzurri however found themselves in a precarious position after claiming another solitary point against a determined Croatian outfit. This left them requiring a win versus Ireland in order to assure their advancement. They did just that, thanks to goals from Antonio Cassano and Mario Balotelli which propelled them into the final eight as runners-up in Group C.

On the same night as Italy progressed, Spain was saved by a late Jesus Navas goal against Croatia which allowed them to finish first in what proved to be a testing group.

This win saw a Spanish team in cruise control face an out of sorts France who were riddled with bickering and infighting that was threatening to derail their campaign.

Ultimately however, the French downfall at the hands of Spain wasn’t a result of anything like the 2010 World Cup saga. Instead, it was the relentless midfield pressure, and ability to possess to ball for long periods of time which gradually wore down Laurent Blanc’s charges.

In contrast, Italy’s quarter-final was a tight affair against England in the venue of tonight’s final. After 120 scoreless minutes in which Italy probably had the better of the play, the Azzurri prevailed 4-2 on penalties and in the process consigned the hapless English to yet another penalty shootout failure in a major tournament.

Spain’s semi-final against an in-form Portugal was also goalless for the full 120 minutes, and despite a handful of key opportunities, neither team was able to fully assert their dominance on a match which looked headed for penalties well before the final whistle.

Cesc Fabregas converted the winning spot kick and Spain rejoiced after prevailing 4-2 in the shootout.

Thursday’s semi-final in which the Italian underdogs overcame Germany was perhaps the most stirring match of the tournament so far. Balotelli scored a brace and even though Mesut Ozil was able to pull one back via the penalty spot in the 92nd minute, the Azzurri were astonishingly a class above against their highly fancied opponents for much of the game.

The Spanish road to Kiev has had relatively few hiccups, and the depth of the squad presents del Bosque with an array of options.

Comparatively, Italy’s road to tonight’s final has been a measured ascension to top form. They have played five games and have only won two of them in normal time, yet find themselves in a Euro final.

MUST-SEE: We all know that Andrea Pirlo is having a phenomenal tournament. Check out this audacious show of confidence from the Italian midfielder in the penalty shootout versus England.

Not to be outdone, one of the players of the tournament, Spanish defender Sergio Ramos was equally as bold in his effort during his team’s semi-final penalty shootout against Portugal. Take a look here.

EYEBROW RAISER: Whatever the Spanish squad is doing on the training pitch, it must be working. They have won 19 consecutive competitive games, and should they be victorious tonight, this training technique may become a bigger global phenomenon than Bieber fever:

BALOTELLI WATCH: Mario Balotelli’s match-winning double against the hotly favoured Germans on Thursday justified his inclusion in Cesare Prandelli’s starting line-up. Not only did he further demonstrate his class, but the celebration following his thunderous second strike was simply incredible. On the eve of the Azzurri’s clash against the Germans, he justified his unique celebratory style by comparing his job to a postman, of all things.

He said: “When I score I don’t celebrate, because I’m doing my job. When the postman delivers your letters, does he celebrate?”

I bet nobody has ever met a postman who reacts like this after slipping letters in your mailbox!

REASONS TO WATCH TONIGHT: It’s a European final, Mario Balotelli is playing, and so is the Spanish midfield and Andrea Pirlo for that matter. What more could you want?

Additionally, meaningless One Day International cricket between Australia and England, even though there are two Ashes series in the next 24 months, only serves to kill ODI cricket even further. Even the most passionate of cricket lovers would find it difficult to get excited for this series, so when Italy and Spain are about to clash tonight, the choice to change from Fox Sports 1 to SBS or Setanta Sports should be a reasonably straightforward one.

REASONS TO CHEER FOR A 94TH MINUTE MARIO BALOTELLI WINNER: Aside from the goal itself, just imagine the celebration! He’s a journalists dream, the fans love him and opposing fans love to hate him. All in all, a 94th minute pile-driver from 35 yards would be great for world football.

TONIGHT: No international team in history has been able to win three successive major tournaments. If the Spanish prevail tonight, they will do just this.

Coincidentally, Italy is the last team aside from their opponents tonight to win a major international tournament – the 2006 World Cup.

While La Roja has a cast of stars who have reached the pinnacle for both their club and country, it cannot be underestimated just how experienced and well organised the Azzurri are.

Furthermore, Italy has history on their side tonight. They haven’t lost to Spain in competitive match in normal time since the 1920 Olympic Games, and their 1-1 draw in the opening game of the tournament was testament to their ability to match it with anyone in the world.

The Spanish look likely to persist with Fabregas as a ‘false number 9’ with Torres out of favour and Fernando Llorente yet to take the pitch this tournament. The tactical smoky from del Bosque’s perspective would be to leave Fabregas on the bench, and play Alvaro Negredo who has seemingly overtaken Torres in the pecking order but struggled against Portugal.

While Spain has a fully-fit squad, the Italians have a couple of injury concerns. 25 year old defender Ignazio Abate who was so influential versus England should be available for selection after recovering from a left leg muscular problem. Meanwhile, Christian Maggio is likely to begin as a substitute despite serving his one-match suspension.

Prandelli will probably persist with a four-man defensive line that was so effective against the Germans. However, before their semi-final victory Italy were prepared to play five midfielders and Prandelli will undoubtedly be tempted to revert to these tactics to counter Spain’s all-conquering central line.

Expect an engrossing, technical yet defensive match. Two goals should be enough to win with arguably the world’s two best goalkeepers in action at either end.

Both teams are highly organised, well drilled and expertly managed and both line-ups possess a raft of potential match-winners.

Spain is the best team in the world on paper, but Italy will upset their Iberian opponents to win their first EURO since 1968.