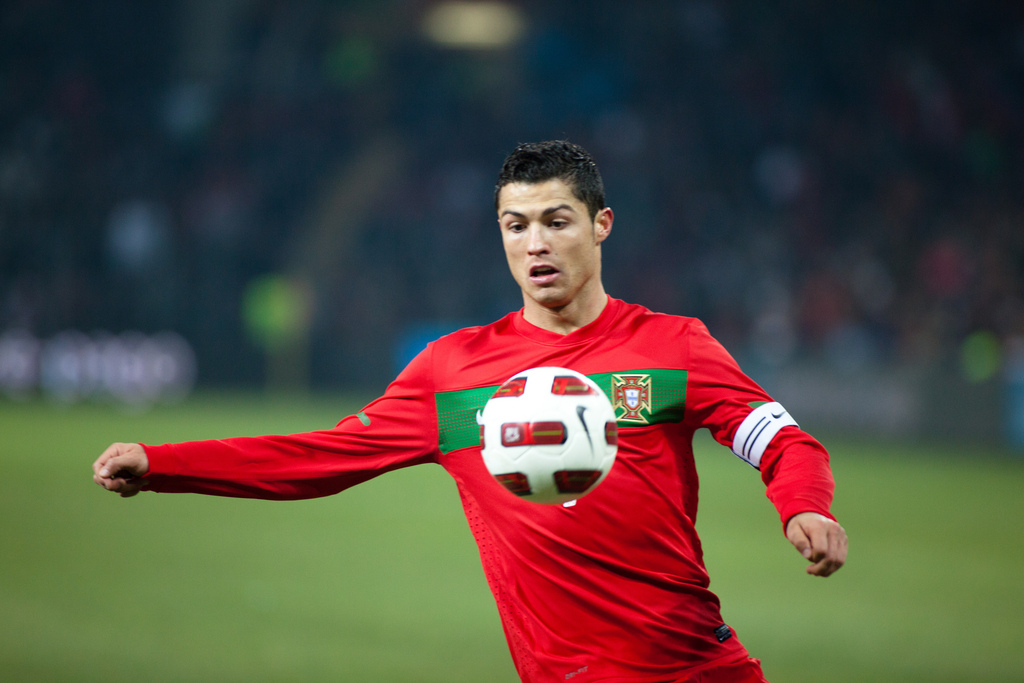 Can Ronaldo find the back of the net? (Photo: Ludovic Péron)

Two clinical finishes from Mario Gomez have put Germany in the drivers seat in Group B ahead of the last round of group matches tonight.

The Germans overcame a Netherlands side that once again struggled to find the net. Twice in the early stages of the match Robyn Van Persie had opportunities to give the Dutch the ascendency, but failed to do so.

He was able to find the back of the net in the second half but it wasn’t enough to salvage a draw as they ultimately went down 2-1.

The loss leaves the Dutch looking down the barrel of being knocked out of the tournament. They will certainly need results to go their way tonight if they’re to proceed.

Denmark on the other hand couldn’t back up their opening round win, as they lost to a spirited Portugal side.

Portugal who jumped out to a 2-0 lead within 36 minutes found themselves under pressure as the Danes equalized at the 80 minute mark on the back of two goals from Niklas Bentdner.

It took a strike from substitute Silvestre Varela in the 87th minute to seal the deal for the Portugese side.

The win has left the second spot in the quarter-finals wide open.

MUST SEE: During the 2010 FIFA World Cup, German manager Joachim Löw set new standards in managerial dress codes, with an assortment of sweaters and scarves appearing on the South African touchlines.

While Löw has remained a coaching-fashionista, Sweden manager Erik Hamrén mounted a strong challenge  at his German counterpart, after donning a three-piece suit against England. While Hamrén was unable to guide Sweden to the Quarter Finals, his ability to pull off the waistcoat will have won him countless fans across Europe.

For some reason the German fans felt it necessary to throw missiles during their clash with Portugal, leading to a 10,000 Euro fine. Nice going.

All four teams can still qualify for the knockout stages of the tournament pending other results. It should be an exciting night and with all teams being in the top 10 of the Fifa world rankings, almost anything can happen.

REASONS TO NOT WATCH:

The star players from both Portugal and Netherlands are under criticism, and there may be some selfish play for viewers to try and swallow.

In other words, Christiano Ronaldo might try and single handedly help his side qualify. The unfortunate thing is that he is as good as he thinks, and may just do so.

This clash is a battle for survival, with the winner a chance of progressing to the knockout stages of the tournament.

The Dutch have had a poor record against Portugal in recent times, only managing one win from 10 starts since 1991. Tonight the Dutch need to win by at least two goals to keep their hopes alive, but with their lack of confidence in front of goal it will be a big ask.

The pressure will be on the likes of Van Persie and Robben to secure a victory.

But the Dutch aren’t the only ones under pressure with Portugal needing a win (and a Denmark loss) to proceed.

All eyes will be on Christiano Ronaldo who has received criticism for his current form. The Portuguese star could not manage a goal from a number of chances during the clash with Denmark.

The Portugese, however, cannot rely on Ronaldo alone and seem a far better side when they use more options close to goal.

After two wins against tough opposition Germany come up against an impressive Denmark side, who have already caused an upset this tournament.

Germany only require a draw to guarantee it a spot in the knockout stages, but still face an early exit if it loses tonight (and Portugal and Denmark both record emphatic wins).

For Denmark to go through, it needs to win and rely on Portugal not taking all three points off the Dutch.

But the Danes may need some luck with Germany in superlative form. The Danes could be a show if they can contain Germany’s danger man Mario Gomez, who is coming off the back of a classy double.

Gomez has scored all of Germany’s goals in the opening two rounds, so halting his scoring ability will give Denmark a fighting chance.

Jake D’Amato is a third-year Bachelor of Journalism student at La Trobe.  Follow him on Twitter @jdamato32.