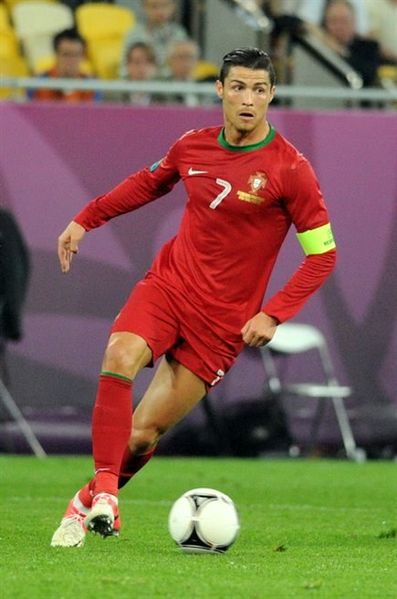 Can Ronaldo lead his side past the Czech Republic and onto the Semi Finals? (image: Ilja Chochłow via wikimedia)

The Quarter Finals of EURO 2012 kick off tonight, and it’s been a great tournament thus far. Germany and Spain have appeased the bookmakers up until now, emerging as the strongest sides in the group phase; both also winning the toughest groups of the tournament.

The Germans won all three of their matches. And while Portugal, Denmark and the Netherlands all made Die Mannschaft work for each win, Germany never looked like not winning the group.

Spain’s defence of its 2008 crown began slowly, with a 1-1 draw against a plucky Italian side, but gained momentum after thumping the Irish 4-0 and squeezing past the competitive Croatia 1-0.

One of Spain’s key joys would surely be the form of Fernando Torres. Torres initially came off the bench in Spain’s opener against Italy, but started against Ireland and Croatia. In the wake of David Villa’s absence, Torres began to show just how good he can be, and after two goals against Ireland, it looks as if El Nino is returning to his best form.

Greece, who shocked the football world in 2004 on its way to the trophy, emerged from Group A above Russia and Poland, progressing on the slightly baffling Head-to-Head rule.

Russia’s elimination came as a huge shock, after the side started the tournament so well, thumping the Czech Republic – who would later qualify – 4-1.

Greece’s progression has drawn them against the marauding Germans in the Quarter Finals, and by now, few will quickly write the Greeks off.

The Czech Republic qualified thanks to Petr Jiráček’s goal against Poland, and will face Portugal in the next round. The Portuguese stuttered through the group phase, and just managed to reach the next round after close wins over Denmark and the Netherlands.

Co-hosts Poland and Ukraine were both knocked out, but perhaps the biggest shock of the group phase was the dismal performance of the Netherlands. The Dutch – 2010 FIFA World Cup runners-up – failed to gain a single point from Group B, and a star-studded squad with the likes of Arjen Robben, Wesley Sneijder, Rafael Van der Vaart and Robin Van Persie could only muster two measly goals.

Italy progressed as runners-up of Group C, and began encouragingly, after holding Spain to a 1-1 draw. The Italians drew 1-1 again against Croatia, and needed a win over Ireland – as well as for Spain to beat Croatia – to advance to the Quarter Finals. Italy’s win over Ireland came easily enough, and the form of Antonio Cassano, Mario Balotelli and Antonio Di Natale is encouraging for the Azzurri. Yet Italy’s star by a long way has been Andrea Pirlo, whose midfield displays have been among the best in the tournament.

Group D saw England and France progress, at the expense of Sweden and Ukraine. The English began slowly but surely, with a solid 1-1 draw against France. This was backed up by a fantastic – yet error-riddled 3-2 win over Sweden, and capped off with a lucky 1-0 victory over Ukraine, in which the returning Wayne Rooney scored the solitary goal.

France looked very strong in its matches against England and Ukraine, with Samir Nasri and Franck Ribery combining particularly well in the final third and causing the opposing defenders a number of headaches. Yet a 2-0 loss to Sweden on the final group match-day means Les Bleus will face Spain in the Quarters, while England – who topped the group – are to face Italy.

MUST SEE: Now that the group stage has finished we can take a step back and admire some of the key factors in EURO 2012; the best of the worst hair-styles. While Mario Gomez and Danny Welbeck continue to set the standards in hair-styling-awesomeness, sadly a number of their peers are lagging well behind. Firstly, Ukraine’s Yevhen Selin’s rats-tail deserves a mention, while it would be poor-form to not mention Joleon Lescott’s tufty-receding-mop-thing. Petr Jiráček may well audition for season three of Game of Thrones after the tournament, with these long shanks. While Zlatan Ibrahimovic’s ponytail might impress the hordes of Melbourne’s indie-hipsters, it’s not fooling anyone else. And finally, one of our favourite footballers, Mario Balotelli, whose blonde, thin and generally disappointing Mohawk rounds out our list.

EYEBROW RAISER: We mentioned the touch-line fashion of Sweden Manager Erik Hamrén and his three-piece suit a few days ago, yet the Italian manger Cesare Prandelli is now beginning to turn a few heads. Prandelli, a huge fan of the fitted puffy jacket in his Fiorentina days, has switched to the more stylish sweater and jacket approach. Rumours are this was a key factor in Italy’s progression to the quarter finals. Possibly.

BALOTELLI WATCH:  Super Mario scored a cracking volley against Ireland to open his account for the tournament, and was so agonisingly close to doing/saying something stupid fantastic in his celebration. Until team-mate Leonardo Bonucci – quickly aware that people in the stands on watching on television are capable of lip-reading – stuck his hand over Balotelli’s mouth. ‘I put my hand in front because Mario is instinctive and that’s also his strength’ said the Italian defender. “We’d spoken with him before the game and he knew how he should behave.’

TONIGHT: The Czech Republic and Portugal kick off the quarter finals tonight in Warsaw. The tie is a rematch of the EURO 1996 Quarter Final. Karel Poborský’s sublime chip over Vítor Baía was all that stood between the two sides at Villa Park that day, and the 2012 edition looks to be just as close an affair.

Cristiano Ronaldo finally got on the scoresheet against the Netherlands, and is now looking as dangerous as he usually does in La Liga. Ronaldo leads the competition in attempts at goal with 21, and has played all 270 minutes of Portugal’s campaign thus far.

Portugal has been well supported at the back by Ronaldo’s Real Madrid team-mate Pepe, who has been imperious in defence, and is yet to attempt homicide.

The Czechs are likely to be without Captain and key midfielder Tomas Rosicky, who suffered an injury to his Achilles-tendon in the side’s 1-0 win over Poland.

Petr Jiráček and Václav Pilař have led the way for their side, scoring two goals each in the group stage.

Tonight’s quarter final should be a close encounter, after neither side set the tournament on fire during the group stage. The Czech’s look like they have sorted out their problems at the back that Russia ruthlessly exploited, but will be met with an equally talented Portuguese defence.

Ultimately, Portugal’s attacking options of Ronaldo, Nani and Hélder Postiga should be strong enough to break down the Czech defence, and Portugal should advance to the semi-finals (1-0).