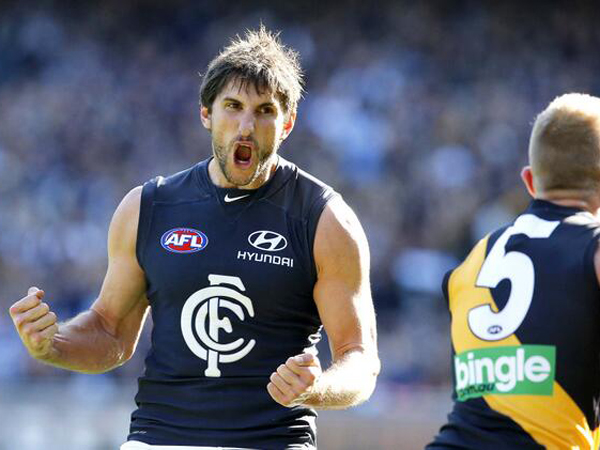 As we so often hear, finals football is a different kettle of fish. High-possession, ‘tempo’ styles of play are replaced with football in its rawest form – win the ball, tackle your heart out and push your team across the line.

The way to win the most esteemed of awards is by playing the roughest and toughest brand of ‘finals’ football, throughout September, and creating memorable finals’ moments that get talked about for years to come. Influence on a game is paramount.

The first four matches of the 2013 AFL finals series have been decided, and now it’s time to look at who is in the box seat to win the inaugural upstart AFL finals MVP, and who will be left to reminisce on ‘Mad Monday’, to their teammates, about how they stood up when it mattered.

A tight first half had Hawks fans wishing Buddy Franklin and Cyril Rioli could put their boots on and inject themselves into the game, but a flat Sydney was ultimately pummelled by the rampaging Hawks.

Josh Kennedy’s ability to win his own ball at the stoppages, and spread just as effectively, saw him grab one vote, with a manic nine tackles complimenting his 29 touches, in a wonderful display.

After falling out of favour with coach Alastair Clarkson mid-season, Brad Sewell confirmed his title as Hawthorn’s number one clearance player on Friday night, with thirteen disposals in the first term keeping the Hawks level in the midfield battle.

Ruckman David Hale’s two goals and 16 disposals were vital to a Hawthorn side missing its number one target up forward. Hale played one of his most dominant games for the Hawks, up against Sydney’s twin towers Mike Pyke and Shane Mumford.

Hawthorn’s fearless leader returned to the ‘quarterback’ role that carried the Hawks to the 2008 flag, continuing a stellar year with his attack on the footy. His brutal style of play suggests his middle name may in fact be ‘September’.

Fremantle’s much publicised motto of ‘anyone, anywhere’ paid dividends on Saturday afternoon, with the Dockers earning a home preliminary final and a week off, leaving the inaccurate Cats in despair.

After a dominant first term, Geelong’s Steven Johnson had Crowley as company for the rest of the afternoon and was noticeably less damaging for the Cats.

With both speed and love of winning the hard ball, Fyfe’s attack was inspirational for his teammates all afternoon, amassing 25 disposals and having a profound influence on the result.

Barlow’s story continues to grow, with 32 touches and an invaluable three goals from the tough midfielder. Showing a mixture of grunt and finesse, Barlow may prove to be one of the most damaging players of the finals series.

Hill proved that with enough talent, some players only need 21 disposals to be the decisive factor, with his ability to break out of a stoppage and thrust the Dockers to a defining win. He probably deserves a bonus four votes for his five-bounce running goal, which sealed the Dockers win – a truly memorable finish.

In a round of upsets, the Power found something deep in the last term to overrun a Collingwood side that seemed to be thoroughly out-coached. Hinkley’s men executed the game plan with precision and an emotional Port Adelaide will not fear the Cats come Friday night.

Olly Wines proved that he belongs in an AFL finals campaign, showing little fear, plenty of composure and youthful exuberance, with two long goals that help set up his team’s win.

Ebert was the general in the emerging Power midfield, finishing with 18 kicks and a tenacious nine effective tackles. His intangible want to put his head over the footy provided inspiration for his team.

The Collingwood champ was incredible for his side, proving to be its best option up forward. An amazing eight marks inside the forward 50, resulted in three goals, off the back of a trademark gut-running display.

With Cloke double-teamed to perfection at one end, it was up to Jay Schulz to capitalise for his side, and with three crucial goals, he did. A hanger in the second term was worthy of a new car, but Schulz will have to settle for the four votes instead.

With 94,690 hopeful fans rolling into the MCG to witness the match of the weekend, the game lived up to all expectations.

After costing his side a goal at the start of the last quarter, Mitch Robinson repaid his teammates with a goal soon after and a final quarter display that confirmed the moniker as one of the toughest players in the competition.

Jarrod Waite became the goliath up forward Carlton desperately needed, finishing with four goals and six tackles, as he monstered his Richmond opponents up the ground and closer to home.

As a late inclusion, after his team’s final warm-up, Nick Duigan became the Cinderella story of the weekend, with four timely goals and seven marks. Duigan showed his desperation with a bone-crunching mid-air collision on Steve Morris when the game was in the balance.

It is hard to keep a champion down, and if two Brownlow Medals hadn’t already provided the great Chris Judd with champion status, then his heroics on Sunday afternoon did. After rushing back from a knee injury, Judd’s explosive pace and precise delivery were celebrated with a standout performance and final-quarter goal that will long be remembered.