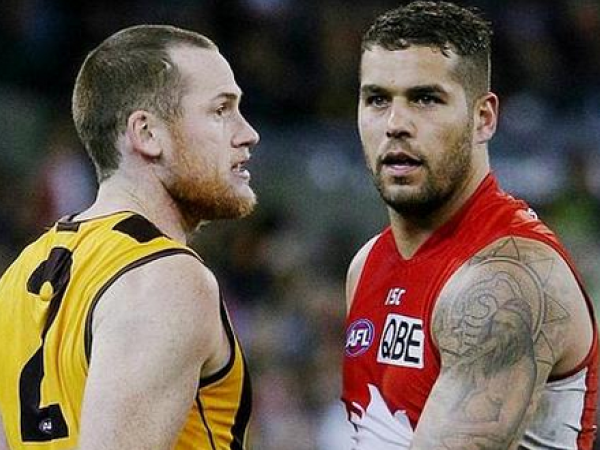 September is here and along with the AFL finals series kicking off on Friday night, the All-Australian team will be announced in a few weeks’ time.

The 40-man squad was announced Tuesday night, but deciding the final 22 will cause some headaches for the selectors and ultimately will, as always, be controversial.

As the date draws near, here is a prediction for the 2014 All-Australian team.

Cale Hooker – He has been one of the shining lights for the Bombers and one of the most improved players in 2014. Hooker was second in the League for marks while also averaging 18 disposals and 3 rebounds a game this season.

Tom Lonergan – He just edged out Daniel Talia and Eric Mackenzie as the main man in defence. Lonergan doesn’t get huge amounts of the footy but has managed to curtail the opposition’s best forward each week and conceded only 20 goals from his 21 games this year.

Brodie Smith – A breakout year for the 22-year-old. Smith finished second for rebounds in the competition while taking the eighth most bounces and averaging 22 disposals a game.

Harry Taylor – Another super season for the experienced Cat. Once again taking on the best forwards, yet somehow managing to win an abundance of the ball. He is one of the best readers of the play in the league.

Nick Malceski – A part of Sydney’s minor premiership side, his season was perhaps on par with his exceptional 2013 – once again leading the AFL in rebounds and kicks. He doesn’t mind sneaking forward for a goal either, as Hawthorn supporters will know.

Tom Rockliff – This guy just finds the footy. Rockliff averaged 32 disposals and nine tackles a game throughout 2014 in his best year to date. The 24-year-old’s 47 disposals in Round 18 was one of the best individual performances of the season.

Dyson Heppell – The 22-year-old has gained a lot more attention since skipper Jobe Watson injured himself mid-year. He has come into Brownlow contention with a sensational back-half of the season, but don’t forget his early season form was just as consistent.

Jordan Lewis – The Hawks’ vice-captain averaged 28 disposals, and only recorded less than 21 touches once this season. The 28-year-old will probably win Hawthorn’s best and fairest, an accolade not yet won by the mid-fielder . He was sixth in the comp for disposals.

Robbie Gray – The supremely talented Gray has stormed home with some punters expecting him to feature heavily on Brownlow night. The 26-year-old has taken his game to another level in 2014, averaging 25 disposals while also hitting the scoreboard regularly with 34 goals.

Jarryd Roughead – Last year’s Coleman medal winner has been up there again in 2014, coming equal second on the goal kicking table with 62 majors. The versatile big-man has had a career-best season for average goals per game.

Luke Parker – The 21-year-old took his game to another level in 2014, averaging 25 disposals across the season and booting 21 majors. He also ranked seventh in the comp for tackles with 134 for the year.

Jay Schulz – The high-flying Schulz has been a revelation for Port since leaving the Tigers, but 2014 has been his best season yet. The 29-year-old finished equal second in the Coleman medal race and kicked four or more majors on five occasions.

Lance Franklin – Buddy-mania stepped up another notch this year, as Franklin’s form returned to his consistent best. The former Hawk’s contested marking was back to his best since his centurion year of ’08 and he took the Coleman Medal with 67 goals.

Luke Breust – The cult-hero Hawk kicked 53 majors in 2014 to finish seventh in the Coleman Medal race, being the best placed small-forward. The 23-year-old also finished second for the league in goal assists and kicked only 10 behinds for the season.

Sam Jacobs – Jacobs returned to the form which nearly rewarded him AA selection in 2012, but this time he has gone a step further. Averaging 16 disposals this season – four more than the other ruckmen in contention – and was second for hit-outs.

Nathan Fyfe – With the injury to Gary Ablett, Fyfe, at least temporarily, may have replaced the dual Brownlow medallist as the competition’s best player. The 22-year-old is one of the leading clearance players despite playing only 18 games for the season, also gathering 29 disposals or more on nine occasions.

Josh Kennedy – The contested-ball machine had another standout season in 2014, with only injury curtailing his consistency. Kennedy averaged 28 disposals this season with a career-high 41 touches – 29 contested – and 12 clearances against Carlton the highlight.

Scott Pendlebury – Even though the Magpies’ struggled in the back-half of 2014, their skipper had another consistent season. The silky left-footer averaged 28 disposals a game, not falling below 23 touches for the entire year.

Matt Priddis – One of the more underrated ball-winners, Priddis led the competition in disposals (averaging 28), third for tackles, and second for clearances and contested possessions in 2014. The 29-year-old failed to collect below 20 disposals for the entire season.

Brent Harvey – Is it possible season number 19 could be the veteran’s best? The 36-year-old averaged a career-high 25 disposals, with his trademark dash still on show while also impacting the scoreboard.

Joel Selwood – Statistically, Selwood has had better seasons than in 2014, but the Geelong skipper’s year shouldn’t go unrecognised. The 26-year-old still finished fifth in the comp for clearances and averaged more than 25 touches a game.

Robert Beaton is a second-year Bachelor of Journalism (sport) student studying at La Trobe University. You can follow him on Twitter: @BobbyBeaton16