EURO 2012 is drawing to a close, and what a tournament it has been. The Spanish have proven their sheer class and strength as a team, having retained the Henri Delaunay trophy – their third consecutive international tournament success.

Italy, who went down 4-0 in the Final, won a lot of fans with its open and attractive style of play; and will surely be a major threat at the 2014 FIFA World Cup.

So, as a final bow for upstart’s EURO 2012 coverage, we’ve selected what we see as the best XI of the tournament, as well as five substitutes who narrowly missed out on selection. 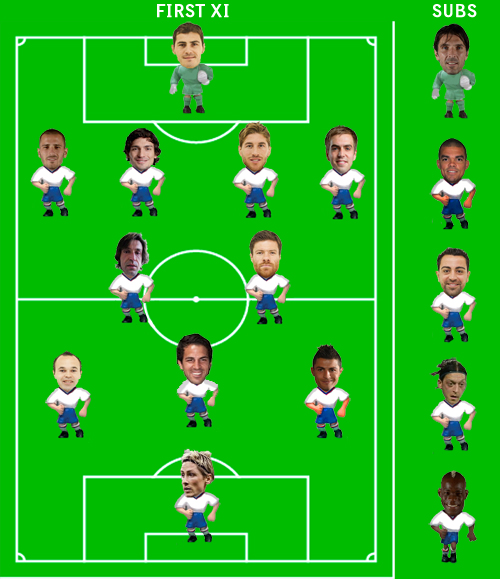 Iker Casillas – Spain’s Captain was as solid as ever between the sticks, and lead his side to an unprecedented third successive competitive trophy. ‘St Iker’ continues to be one of the world’s best ‘keepers, and EURO 2012 saw him concede only once during the tournament – in the opening tie against Italy. The Final saw a classy display from Casillas, who looked unflappable against the Italians, and made a number of key saves and clearances – in particular to deny Antonia Di Natale moments after half time, to ensure his side kept its two goal lead.

Leonardo Bonucci – Perhaps the strongest member of Italy’s constantly revolving defence, Bonucci was pivotal in the Azzurri’s run to the final. Aside from the 4-0 loss to Spain in the Final, the Italian defense looked rock-solid, and only conceded three goals. Leading into the tournament, few expected Italy to progress deep into the tournament, and Bonucci was a key factor in Italy’s success.

Mats Hummels – As the central figure in Germany’s defense, Hummels was imperative in his sides’ early dominance of the tournament. At just 23, Hummels has emerged as one of Europe’s best young defenders, and was by far one of the stand out players at EURO 2012. A commanding figure in Germany’s run to the Semi Finals, the only down-point of Hummel’s tournament came against Italy, where the Borussia Dortmund defender snatched at a couple of scoring chances, which could have brought his side back into the game.

Sergio Ramos – Perhaps Spain’s most consistent player at EURO 2012, Ramos lead from the back for his side. Ramos rarely slipped up in defense during the tournament. His tackle on Mario Balotelli in Spain’s opening game against Italy – after losing possession – summed up his skill and determination to the Spanish cause. Ramos was named Man of the Match in Spain’s Semi Final triumph over Portugal, and coolly blew-away any memories of his Champions League shoot-out miss with this amazing effort.

Phillip Lahm – Germany’s Captain was in top form during EURO 2012, and continues to be one of the world’s better full-backs. Lahm was a constant threat for Germany, and was tireless in his marauding runs up and down the left wing. Lahm’s sole goal of the tournament was the  crucial opener in Germany’s Quarter Final against Greece.

Andrea Pirlo – Arguably the player of the tournament, Pirlo rolled back the years to tear apart the opposition at EURO 2012. His passing, running, creativity and tackling was world class, and an enourmous factor in Italy’s progression through the tournament. Pirlo was awarded three Man of the Match awards, following Italy’s matches against Croatia, England and Germany. Pirlo scored a stunning free kick against Croatia, and provided two assists. The play-maker completed 411 passes during the tournament – at a 76 per cent completion rate.

Xabi Alonso – for once, Xavi Hernandez was not the shining star of Spain’s talented midfield, for instead it was Xabi Alonso. He played exceptionally well for the Spanish, and completed 490 passes for the tournament. Alonso scored twice at EURO 2012 – both goals coming during his 100th cap, which saw Spain defeat France in the Quarter Finals. While Alonso missed his penalty in the Semi Final shoot-out, his midfield display helped Spain overcome Italy in the final.

Andreas Iniesta – Spain’s pint-sized wizard was in typically spellbinding form at EURO 2012. While Iniesta failed to get onto the score sheet, he was an essential part of Spain’s midfield, often being deployed on the wings. Iniesta’s passing, dribbling and vision earned him three Man of the Match awards, two of which coming against Italy – the latter in Spain’s 4-0 Final win over the Azzurri.

Cesc Fabregas – often deployed in the middle of Spain’s forward three as a ‘false nine’, Fabregas’ attacking displays proved to the world that the best side in modern football doesn’t need a traditional striker to score goals and win tournaments. Fabregas scored Spain’s equalizing goal against Italy at the start of the group stage, and provided the cross for David Silva’s opener in the Final.

Cristiano Ronaldo – Real Madrid’s €80 Million man was at his destructive best during EURO 2012, and was a kick away from guiding Portugal into the Final. Ronaldo scored three goals in the finals, and was twice Man of the Match – against the Netherlands and the Czech Republic. Yet the quest for glory seemed to have gotten the better of Ronaldo, who was set to take the clinching fifth penalty in the shoot-out against Spain, if not for Bruno Alves’ miss.

Fernando Torres – Even though El Nino couldn’t hold down a starting role for Spain, his contribution was nothing short of exceptional. Torres was awarded the Golden Boot as top scorer, with three goals. Spain’s number nine seems to be nearing his better form – after a slow start to his Chelsea career – and has looked the goods in his five appearances at EURO 2012. Torres scored and assisted Juan Mata in the Final, which served to seal his sides’ triumph.

Gianluigi Buffon: Italy’s Captain was inspirational en-route to the final, yet was edged out of our First XI by Casillas’ performance in the Final. Buffon saved Ashley Cole’s attempt in his sides’ shoot-out victory over England, and was a strong performer for Italy throughout the tournament.

Pepe: Portugal’s stopper played well at EURO 2012, and helped guide his team to the Semi Finals. Pepe, always with the potential for a major brain-snap, behaved himself throughout the tournament, and was a strong figure at the back.

Xavi Hernandez – while EURO 2012 wasn’t Xavi’s best tournament, he was still a key player in Spain’s all-conquering midfield. Xavi lead the tournament in passing, with 531 successful passes – at 86 per cent. Xavi failed to score during the tournament, but did provide two assists for his side.

Mesut Ozil – Germany’s number eight enjoyed early success with Germany, and looked to guide his side to its first trophy since 1996. Yet a plucky Italian side stood in the way, and knocked them out in the Semi Finals – of which Ozil stood out as one of Germany’s few impressive players. Ozil was Man of the Match against Portugal and Greece, scored once and provided three assists during the tournament.

Mario Balotelli – Perhaps the most unpredictable footballer in the world, Balotelli emerged as Italy’s key attacking outlet during the tournament, and scored three goals. Two of these came in the Semi Finals against Germany, the second a near perfect strike past the hapless Manuel Neuer.

Shane Palmer is a third-year Bachelor of Journalism student at La Trobe. You can follow him on Twitter: @SDPalmer12.