Inventors whose creations not only revolutionised their respective fields, but served as catalyst for the evolution of the human condition. Without the work of these men, the world would be an entirely different place today.

They were brilliant minds who drastically impacted the day-to-day lives of people; innovators in the truest sense of the word. 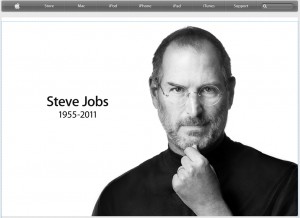 Apple pays tribute to its founder and former CEO (apple.com)

The visionary co-founder of Apple, responsible for transforming personal computing, and how music, movies and mobile communications are experienced in the digital age, died on Thursday.  He was just 56.

Jobs ultimately succumbed to his long battle with pancreatic cancer, with which he waged a drawn-out and visible struggle, maintaining his position as the face of the company during his treatment.

It’s hard to think of one single person who has had a greater impact on contemporary life.

Jobs was the mastermind behind turning Apple from an also-ran computer company, trailing in the all-encompassing wake left by Microsoft in the 1990s, to the tech behemoth it is today.

In May this year, Apple was valued at approximately US $323 billion, having seen its market capitalisation figures increase almost 700% over the past five years.

Who would’ve thought the letter ‘i’ could be so valuable?

But it is beyond the business realm – where Jobs will be remembered as one of the most titanic and profitable figures in history – that the Apple co-founder’s real legacy lies.

It started with the release of the first ‘iMac’ in 1999, and ever since, Jobs triumphantly led Apple down a path of innovation: iPods, iPhones and iPads are not just consumer products; they’re arguably some of the greatest inventions of the modern era.

Before them, the possibilities they provided would have been laughable to most. Now, it’s almost hard to remember how we ever lived without them.

Odds are, you probably own a product that was the creation of Jobs.  In fact, you’re probably reading this on one.

Jobs spearheaded a company that became a cultural phenomenon.

It would be a challenge to find someone in the developed world who does not possess an ‘i’-something, or know someone that does.

Jobs’ successes doesn’t end there, however.

He was also the man responsible for turning a small, struggling computer-graphics firm into what we now know as Pixar Animation Studios.

The word ‘genius’ sometimes gets thrown around with reckless abandon, but in reference to Jobs, it rings true.

Perhaps the most poignant description of Jobs influence came from a quote from an unlikely source: ‘There may be no greater tribute to Steve’s success than fact that much of the world learned of his passing on a device he invented,’ said US President Barack Obama, in his statement regarding the news.

And Obama is not alone is his sentiments for Jobs.

Twitter CEO, Dick Costello, tweeted: ‘Once in a rare while, somebody comes along who doesn’t just raise the bar, they create an entirely new standard of measurement.’

There is no doubt that Jobs created a new standard.

It’s been a long journey from the original Macintosh personal computer in 1984, to the MacBook Airs and iPhone 5, but Jobs was leading the charge every step of the way.

He was able to create something unlike anything that had preceded it, and ultimately shaped and changed all that would come after it.

The mark of a true inventor.

Liam Quinn is a first-year Bachelor of Journalism student at La Trobe University.  You can read more of his work on his blog, and follow him on Twitter: @liamquinn23