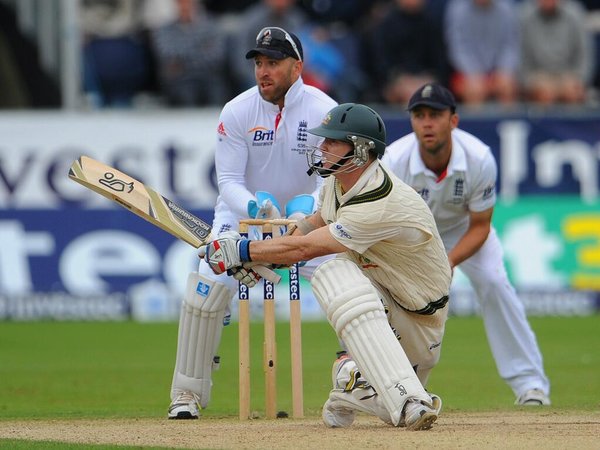 Two weeks shy of his 36th birthday, Chris Rogers became the oldest Australian since Arthur Richardson in 1926, to score a maiden test century and give Australia a feel good story in an otherwise bleak Ashes series.

Rewind two months and Chris ‘Bucky’ Rogers was picked from the international cricket wilderness to play a formidable role in opening Australia’s batting lineup in the upcoming Ashes series, in England. England is a place where he has made countless runs for his county side Middlesex and acquired valuable experience on the testing English wickets.

With incumbent coach Darren Lehmann now at the helm, the man affectionately known as ‘Boof’ backed the decision of his predecessor, Mickey Arthur, to give Rogers the opportunity to open the batting.

And he has thrived.

A modest total of 16 in the opening innings of the first test at Trent Bridge, was followed by a steely 52 in the second dig, which gave his side a great platform chase of 311, of which Australia fell agonisingly short.

His scores of 15 and six, respectively, in the second test at Lord’s probably had a few people questioning if Bucky was up to test level.

Rogers was cruelly denied his maiden test ton in the third test at Old Trafford, after a sterling knock of 84. The innings would have certainly done his confidence a world of good, and proved to himself that he belonged in such esteemed company.

With his tail up after his highest test score to date behind him, Rogers looked assured on a pitch that was conducive for seamers.

With Australia reeling at 2-12 and then again at 4-76, Rogers’s patience and grit eventually wore down the English bowlers and made it to the coveted three figures.

Of course with any big score, he rode his luck. He not only withstood a blistering spell from Stuart Broad, but when Australia was languishing at 2-34, Rogers was given out caught behind by umpire Tony Hill.

However, the left-hander correctly referred the decision to the third umpire, which again sparked some more DRS controversy.

The ball was found to be missing the bat, however Hawk Eye showed that the ball was clipping the stumps, meaning he would be out LBW. But as DRS regulations have it, because the on field decision was caught behind and not LBW, Hawk Eye needed to show three reds for the decision to be upheld.

Rogers was offered another reprieve when Graeme Swann put down a tough one-handed catch at second slip.

Despite never looking completely comfortable, his dogged determination kept him at the crease. However, Bucky did display a full range of elegant drives, cuts and pulls.

One shot he hadn’t played, in the previous 226 balls he faced, was a sweep shot. After being stuck on 96 for a staggering 19 balls, Rogers got down on his left knee and swept Graeme Swann behind square-leg to the rope for four, to reach his 61st first-class century and certainly the one he will remember the most.

You could see the adulation in his face as he shared the moment with Brad Haddin and raised his bat and helmet to the adoring Australian dressing room.

Despite his original selection raising a few eyebrows because of his age, Rogers has certainly earned his spot after a stunning Sheffield Shield and County season.

Rogers finished the 2012/13 Shield season third on the run scorers list, with 742 runs at an average of 49.46, including three centuries. He also won his second Bill Lawry Medal, which is awarded to the Victoria Bushrangers Sheffield Shield player of the year.

Not bad for a guy who only last year was in danger of losing his Cricket Victoria contract.

At the end of the 2011/12 season at the age of 34, Rogers didn’t seem to be in Australia’s plans and Victoria was looking to youth to mould future international players. Bucky managed to hold on to his contract and delivered a career defining season.

He has now added stability and experience to Australia’s brittle top order. The fact that he was the first Australian, other than Michael Clarke, to score a ton in seven tests speaks volumes of his achievement.

Although he may not be the long-term solution to Australia’s batting woes, Bucky’s perseverance and application is a credit to himself and the selectors.

His achievement should give hope to every budding cricketer that hard work does pay off.