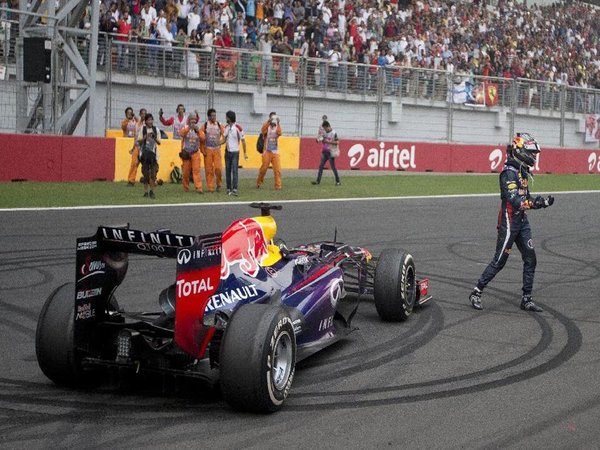 You’d think by now that Sebastian Vettel would be used to that winning feeling.

But on Sunday, as he made his way to the podium to make his speech and collect his Indian Grand Prix trophy and fourth straight world title, he seemed to be hit by a wave of pure emotion that seemed to take him completely by surprise.

He fought back tears, stammered over his words and bounced from topic to topic, from thanking sponsors, to suddenly spouting his philosophies over the differences between his success and those less fortunate.

“I don’t know what to say, I crossed the line and I was just empty. You want to think of something to say and I just can’t.”

Considering the ruthless, machine-like domination that the 26 year-old has enforced on the rest of the F1 field this season, it was actually quite refreshing to see a more human side to him.

But no sooner had the dust settled on the Indian track, the inevitable comparisons with history and Vettel’s standing among the greats came seeping through and set the F1 community ablaze with impassioned discussion.

On paper, there’s no doubt that the German has the credentials to stand tall and proud above many of the other F1 Gods.

He also holds the record for the most poles in a season, the most points in a season and is well on the way to scoring the record number of consecutive wins in a single season, with just three more to go before he eclipses Alberto Ascari’s 60-year old record of nine.

But basing everything on statistics doesn’t tell the whole story.

For example, Gilles Villeneuve never won a world title and only holds six race wins to his name, yet is fondly remembered as one of the most outrageously talented drivers F1 has ever seen.

He also had an attractive, attacking driving style and a personality that made him adored by fans.

Vettel, on the other hand, has been booed by crowds at several races this season, for his ‘boring’ style and somewhat arrogant demeanour.

It may seem irrelevant for a driver’s personality to factor into how great they truly are, but it’s clear that the more interesting and likeable characters are remembered with greater enthusiasm.

After all, most F1 fans’ choice for the number one ‘greatest driver ever’, Ayrton Senna, was one of the most beloved sportsmen ever, famous for donating millions to charities in his native Brazil and giving legendary press conferences where he compared racing with philosophical analogies.

When he died in a tragic crash in 1994, medical examiners found a Austrian flag in his car that he had intended to raise after the race in honour of rookie Roland Ratzenberger, who had died in a crash a few days earlier.

It could also be said that Senna’s three world championships were far more impressive feats than Vettel’s four, due to the fact that he had an arch-rival team-mate in Frenchmen Alain Prost, who pushed him every step of the way.

Their cars were more or less evenly matched, which meant that the racing was more of a tactical and mental battle of wits between the two men who refused to give each other anything. And this all happened in a time period where driver safety was nowhere near what it is now – when they went out to race, they knew very well it could be for the last time.

Comparatively, while Vettel has talented drivers like Fernando Alonso, Lewis Hamilton and Kimi Raikkonen to contend with, none of their cars have been in the same class of the Red Bull, in terms of both speed and reliability, over a season long campaign.

Obviously this isn’t the fault of the German, and is a compliment to the superb work that the Red Bull team has done over the last few years to ensure that their main man is always on top.

And, admittedly, many of his rivals have made silly mistakes that have cost them dearly (like Alonso last weekend), which has allowed Vettel to capitalise more ruthlessly.

But it still doesn’t take away from the fact that the Red Bull is the strongest car on the field overall.

It leaves young Seb in an unfortunate situation. Ultimately, he can never prove himself as being the best driver there is when he is consistently getting an unfair (but completely legal) advantage over his opposition.

Fortunately, there are plans to change some of the technical regulations for season 2014 in order to try and even up the competition and create a more competitive field.

If Vettel can continue to dominate as he has done so far, there will be no shadow of a doubt over his capabilities and, given his youth, he can go on to become one of, if not the, greatest of all time.

But he hasn’t earned it just yet.