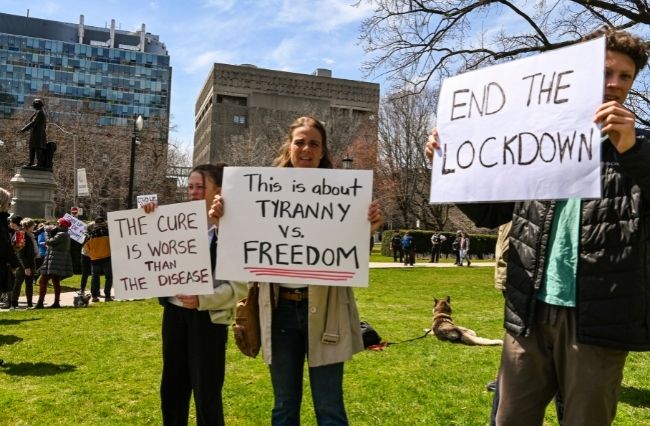 Following thousands of anti-lockdown protestors flooding Melbourne streets on Saturday, Victoria Police are pursuing a trio of protestors in relation to flares being released during the march.

Early this morning, Victoria Police have released images of the three protestors, two men and a woman, who they believe can assist them in their inquiries.

“Police are aware of several incidents where the flares were set off which endangered not only police but people in the vicinity of the incidents,” the police said.

The statement and image release follows Assistant Commissioner Luke Cornelius vowing that investigations regarding the protest were ongoing, and Victorians “could be sure” many more fines would be issued than the initial 72 from over the weekend.

The anti-lockdown protest was held on the last weekend of Victoria’s fifth COVID19 lockdown, in conjunction with other protests across the country, and was widely condemned by health and government officials, including Victoria’s Chief Health Officer, Brett Sutton

“I want freedom from being amongst the over 4 million official (and likely 10 million actual) COVID deaths globally,” he tweeted.

“We can argue the merits or otherwise or various approaches to managing transmission, but let’s not pretend that ‘marching for freedom’ will actually deliver the precious freedom that we all need and desire”.

Similarly, Cornelius commented at the time that he was disappointed to see “so many people blatantly disregarding the Chief Health Officer Directions (and) putting the health of Victorians at risk”.

Police are urging anyone who recognises these people or with information about the incident, to contact Crime Stoppers on 1800 333 000.

Photo: Lockdown Protesters by michael_swan available HERE and used under a Creative Commons Attribution. The image has not been modified.