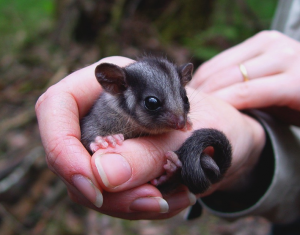 According to scientists, the world is facing its sixth extinction crisis and this time the blame can be laid primarily at the feet of humans.

Australia does not have a very good track record when it comes to preventing the extinction of endangered animals, in fact we have one of the worst especially when it concerns mammals. The logging and clearing of habitats has been a major contributor to the extinction or endangerment of a variety of species, and Australia has a long list of extinct animals.

The Leadbeater’s possum is one such endangered animal. It populates a very small area in the highlands of central Victoria and the major threats to its habitat have been logging and bushfire. The Leadbeater’s possum was thought to be extinct by the 1950s but was rediscovered in 1961 and made the faunal emblem of Victoria.

The 2009 bushfires severely decimated the possum population and it is now thought that there are only 1500 left in the wild. However, bushfires are not the worst threat for the possum; the worst by far is the continued logging of their already depleted habitat.

‘Under the Baillieu government they are basically removing the regulations and making it a free for all for the timber industry,’ says Sera Blair, president of the Friends of the Leadbeater’s possum.

‘They have decreased protection for threatened species habitat, ignored the research that shows the decline in habitat since the bushfires and allowed the industry to keep taking as much from the forest as they did before the fires even though we lost half of the forests in the fires.’

Professor David Lindenmayer, who recently quit the government run conservation team set up to protect the possum, says that if the situation doesn’t change there is no chance of survival for the Leadbeater’s possum and it will be extinct in 20-30 years. Lindenmayer’s resignation from the team was in protest to the ineffectuality of the government run initiative.

Blair agrees with Lindenmayer’s assessment, adding ‘if they continue destroying the forest at this rate they will be extinct by 2030, sooner if we get another big fire.’

The State Government has given approval for Australian Paper, the producer of Reflex paper, woodchips and the like, to log in the central highlands. Despite a fight in the Supreme Court, the logging of the animal’s habitat in the mountain ash forests continues.

As Blair points out ‘They [the Victorian government] have given the industry a guarantee of 20 years support and have totally stalled on any protection for Leadbeater’s.’

The animal is on the verge of extinction, so what is the Victorian government doing to protect the possum?

‘Especially as no account has been taken of 72 000 hectares of forest being burned and 42% of the species’ habitat being lost to the fire.’

Both Blair and Lindenmayer believe that state and federal government should be doing more to help protect endangered and vulnerable animals in Australia.

‘They need to fix the legislation and make it stronger. They keep weakening it to allow for development and industry,’ Blair says.

‘A review of the Flora and Fauna Guarantee Act in 2009 showed they used 1 out of 5 conservation measures and did that one very poorly.’

Lindenmayer adds that the government should ‘increase the reserve system dramatically for the animal, reduce logging by 70% or over and switch from clearfelling to retention harvesting.’

In response to the situation, a number of groups are launching campaigns to rally support for the beleaguered possum. For some years now, The Friends of the Leadbeater’s Possum Inc. have been running a number of projects aimed at increasing the chance of survival for the possum and raising awareness in Victoria. The organisation, along with The Wilderness Society, also look into the logging of native forests and campaign for the use of ethical paper. Various other campaigns are run or supported by organisations such as The Wilderness Society, Zoos Victoria, Act Wild and The Last Stand.

More recently, former Greens leader, Bob Brown has added his support to the protection of the Leadbeater’s possum. The Greens party themselves have also recently established a campaign, run by Senator Richard Di Natale, for protection of the Leadbeater’s possum. This campaign may create the opportunity to bring the issue to the forefront of state and federal politics. However, neither Lindenmayer nor Blair seem very hopeful of decisive change from the government, either on a state or national level.

‘The Commonwealth government is planning to pass more authority to the state government for land management, despite the fact they have shown they are totally incapable of conservation and as a result have handed the forests to the timber industry and are in the process of making them self-regulating.’ Blair says.

‘Really we could not be in a worse position in terms of political will to save our forests.’

‘Our only chance is people power. We can try, and we have been, but the challenge is getting harder and harder without government support’.