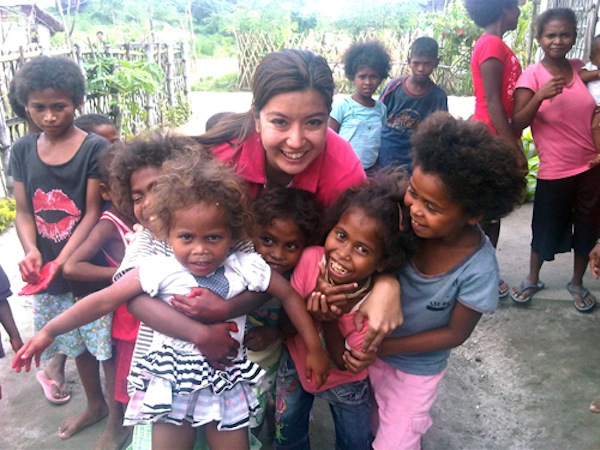 Voluntourism, the amalgamation of travel and charity, offers a culturally enriched experience for idealistic youth to “find themselves”.

The rate of youth volunteering in Australia is rapidly increasing and volunteer tourism is an emerging area of involvement. With the recent surge in the global business of voluntourism, questions have been raised about whether these programs are more of a hindrance than a help.

But what is voluntourism?

Voluntourism expert Kent Goldsworthy, from RMIT University says, “It has to be something that is done by someone from a rich country going to a poor country, where that voluntourist has paid for the experience.”

These trips are relatively affordable, and with some weighing in at less than a standard backpacking trip, they are an appealing option for university students. Voluntourism companies frequently target starry-eyed students with disposable incomes; they offer tantalising deals where you can spend one-week building houses or bonding with adorable children, then enjoy the rest of your trip soaking up the sun.

The actual point of volunteering – helping others – is often lost amidst the more alluring benefits, and what many volunteers fail to realise is that they aren’t being driven by altruism. Some people do it to gain a competitive advantage on their CV, while others are more concerned with the social kudos it invites. And of course, young Australians just love to travel.

But even if they are just in it for the holiday, can volunteering really be a bad thing?

While there are many programs that provide beneficial help, the area is riddled with complications. Even with the best intentions, uneducated voluntourists are unlikely to make a positive change.

Goldsworthy notes that voluntourists are unskilled for the work they are doing. Without expertise to utilise, it can be difficult to make a valuable contribution in a short time. Many volunteers return home feeling unsatisfied and left to ponder the limited impact they have made.

La Trobe University student Mikhaela Shafran is one of many disheartened volunteers to encounter an unrewarding experience.

Shafran landed in Darjeeling, India, eager to begin her placement teaching English to schoolchildren. But rather than the impoverished community she had envisaged, she arrived at a well-off private school.

“We felt like we were not needed or wanted at the private school,” she said.

Travelling with a large, well-known company, Shafran felt more care should have been taken to find a suitable placement – where her efforts to help would be put to good use. She also noted that her situation was not an anomaly.

“I had two friends in the same area and their school was also wealthy with plenty of teachers and resources,” she said.

These programs frequently prioritise making money above helping the disadvantaged, and the result is the exploitation of tourists and vulnerable communities.

Contributing to the issue is the lack of risk management. Many programs neglect to conduct police checks or working with children checks on volunteers who will be working in orphanages. This opens the door for child abuse and a multitude of other perturbing issues.

Orphanage tourism in Cambodia is one popular avenue of voluntourism that frequently garners criticism. Trips to orphanages that tug at the heartstrings of volunteers are rampant with ethical quandaries.

According to UNICEF, the vast majority of orphans in Cambodia have at least one living parent. The industry is driven by profit, capitalising on the ignorance of foreigners.

In an Al Jazeera article, social worker Susan Rosas wrote: “volunteering places the children at risk of abuse and perpetuates the notion that everyone who loves these children will go away”.

“They charged us $2000 for two weeks and said the money went towards the project, but the AIDS orphanages we were working at had nothing,” she said.

“We felt like we were just using up resources, we weren’t really making a difference. They didn’t even do police checks on any of the volunteers.”

With such stories to be wary of, it can be difficult to identify a beneficial avenue for your aid.

Goldsworthy encourages would-be voluntourists to ask questions about what the beneficiaries in the communities get out of it.

“Is there any evidence that the organisation has made a positive and sustainable difference? Or is there evidence that harm has been done?” he asked.

If you can’t find transparent answers to these crucial questions, perhaps the best thing to do is stay home rather than engage in irresponsible voluntourism.

“The best way to make a difference is to make a change in the way we behave in our own lives,” says Goldsworthy.