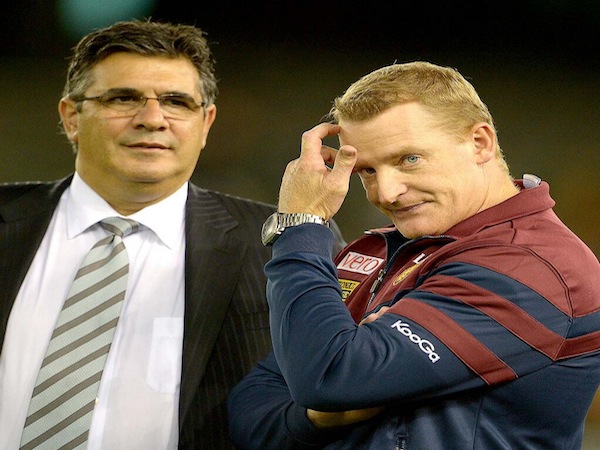 It was a hit that nobody saw coming – a sledgehammer of Norm Smith-like proportions. Justifying its soap opera tag, the 2013 AFL season continues to create headlines for an assortment of off-field matters.

Those in favour will see this as a business decision, one which puts the club before the individual and results before sentiment. Those against the call that was made on Tuesday afternoon will condemn the axe that fell on Voss’s head, especially its swiftness and sharpness. They will argue that this man is a club legend, a three-time premiership captain and as synonymous with the Lions brand as Roger Federer is with Nike.

In reality, the truth lies somewhere in between. There should still be room for sentiment, but not to the detriment of betterment. It’s a balancing act that is far greyer than it is black or white.

If Brisbane hasn’t already locked in Paul Roos, then this decision is reckless and disrespectful.

However, if Roos, a Fitzroy legend in his own right, is ready to take the helm, then this decision is probably the right one, albeit harsh and somewhat shoddy.

Roos is the only readily available coach that demands a position over Voss.

As if we needed any reminding after Mark Harvey and Brett Ratten’s sudden exits, there are no fairytales in football anymore – least of all for coaches.

A shocked Voss put it best on Tuesday afternoon: “Tomorrow I’ll wake up and I don’t go to work, and that’s all I know.”

As one Tweeter remarked, who would have thought at the beginning of the week that one of the 1996 Brownlow medallists would no longer have a job – and that man would be Michael Voss? Regardless, Tuesday was a day both men would rather forget.

Voss joins Mark Neeld on the 2013 coaching scrapheap. Both men were on the receiving end of media scrutiny, but Voss and his young team fought through it. In fact, Brisbane has won four of its last six games, including an inspirational victory against Geelong in front of its home crowd.

For a club that fondly remembers premierships, mediocrity was Voss’s downfall. Had Mark Neeld’s team been mediocre this season, he would still have a job.

As Brett Ratten found out, internal expectations can suffocate a coach, regardless of how unrealistic they are.

The Lions finished sixth in Voss’s first year in charge, but haven’t finished higher than 13th in the three seasons since, a position they find themselves in now. While Brisbane has performed admirably, the results bare out limited improvement in the last 36 months.

Yes, there were promising signs – youngsters Mayes, Zorko and Rockliff just to name a few. But no, the wins and losses column didn’t reflect this supposed improvement.

However this episode of the 2013 soap opera may not be as much about Voss as it is about his replacement. Paul Roos, the only man whose appointment could justify this decision, admitted on Tuesday evening that Brisbane approached him four weeks ago, only for the former Fitzroy legend and Swans premiership coach to offer the same mundane reply as he did to Melbourne CEO Peter Jackson earlier in the year.

Curiously, Roos was assured that Voss knew of this preliminary approach.

It’s the twists and turns in football which make the game so enthralling and captivating. But curve balls like this rest heavy in the heart. It cuts us back to the stark realisation that the AFL is a professional industry rather than a recreational pastime. We all know the game is no longer a hobby at the highest level, but occasionally we drift back into the romanticism of the sport – that is, the notion that it’s pure and right – that the game sorts itself out eventually to the benefit of everyone.

But then Michael Voss gets sacked, seemingly from nowhere, and we all come crashing back to earth.

It’s a script that was written in Perth two seasons ago when Ross Lyon replaced Mark Harvey as Fremantle’s senior coach. Harvey, blindsided by the move from the Dockers’ board, was promptly appointed as Voss’s senior assistant. Now the football wheel has turned, and Harvey looks most likely to lead the Lions against the Giants this weekend.

But if Brisbane’s board has done its due diligence, it’s a position Harvey should only hold for three weeks.

Paul Roos is lingering in the shadows and is a perfect fit. It’s just a shame it had to happen like this.

Tom Morris is a third-year Bachelor of Journalism (Sport) student at La Trobe University. You can follow him on Twitter: @tommorris32