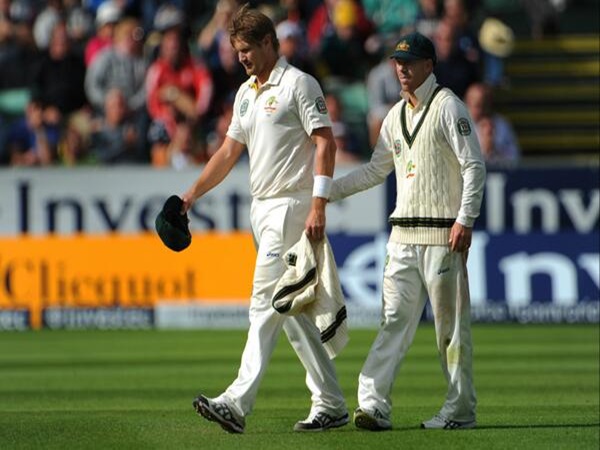 It would be funny if it weren’t so predictable.

Shane Watson taking a step across his stumps, missing an on-drive, before unsuccessfully reviewing his LBW dismissal characterises Watson’s performances during the 2013 Ashes series thus far.

His LBW dismissal at Chester-le-Street off the bowling of England’s Peter Siddle clone, Tim Bresnan, was comical in its predictability. Of course, Watson reviewed umpire Aleem Dar’s decision and, of course, the ball was clipping leg stump.

It’s difficult to argue against the suggestion that Watson has a technique problem. In the 81 Test innings where he has been given out, he has been dismissed 25 times (32.4 per cent) for LBW. Of all established batsmen worldwide, this is easily the highest percentage.

His last 21 appearances at Test level have yielded 514 runs, an average of 24 runs per innings. In those 21 innings, he has only passed 50 twice, and he has produced no centuries. Watson’s last Test ton came in October of 2010 against India in Mohali.

Over his Test career as an opening batsman, Watson has averaged 34 runs. While it is important to remember that he is officially listed as an all-rounder, his bowling leaves much to be desired.

Watson’s strike rate is 68.5 – one wicket every 11 overs. His bowling is economical but not threatening. Unfortunately, injury has also marred his bowling career, as his body seems unable to withstand the rigors of fast bowling.

Shane Watson gets a pat on the back from David Warner as he walks off the pitch with an injury. Photo: Visionhaus pic.twitter.com/dS5kbySaBn

While Watson’s contributions on field appear somewhat meagre, it has been the off-field accusations that have provided the most angst for fans of Australia.

He was dropped from the Australian side during their tour of India in 2013 for failing to complete homework assigned by the coach. He flew back to Australia for the birth of his child and told reporters that he was considering retiring from Test cricket.

Sacked team coach Mickey Arthur revealed startling claims of a rift between Australia’s captain Michael Clarke and Watson, stating “there was major tension between the two”. Clarke is alleged to have referred to Watson as “a cancer on the team”.

As Clarke is the captain and Watson the vice-captain, this disharmony is troubling. Team leaders need to be able to communicate effectively, problem-solve, and above all, work together to lead the team.

The two men have a lot in common and they’ve been playing cricket against and with each other since they were 12. They should be the one-two punch that makes Australia better, not worse.

Instead, the mental fragility that seems to have permeated the Australian cricket team’s once enviable psyche is forcing it to crumble from the inside out.

Watson has displayed glimpses of stubbornness on tour previously. He was allowed to travel with his own personal physiotherapist while the rest of the squad made do with the team’s medical staff. Commentators believe Watson was afforded these concessions because of his prodigious talent.

Were any other Australian player experiencing the technical, physical and mental issues that Watson is, they would be banished from the team, as so many have been since the Dream Team was disassembled.

Phil Hughes, Usman Khawaja, Steve Smith, Matthew Wade, David Warner, Ed Cowan: all struggled with technique and form, and all were banished from the Australian team until they improved.

Watson seems to have the golden ticket. No Test centuries since 2010, and yet his name appears stamped at the top of the team list over and over again.

Perhaps it is time for the Australian cricket hierarchy to realise that Watson is not going to become — as the legendary Glenn McGrath once described him — “one of the best all rounders of all time.”

It needs to rescind his get-out-of-jail-free pass.

In the one series that matters above all else, Watson’s inability to perform with the bat, his physical inadequacy with the ball, and his mental issues off the pitch are hurting Australia’s reputation and its performance.

There is one Test left in England. Watson has an opportunity to dispel any doubts about his ability, and help Australia avoid embarrassment in the Ashes.

Jordan Witte is a second year Bachelor of Journalism (Sport) student at LaTrobe University. You can follow him on Twitter @wittsjw