How has watching horror from a young age impacted its viewers? 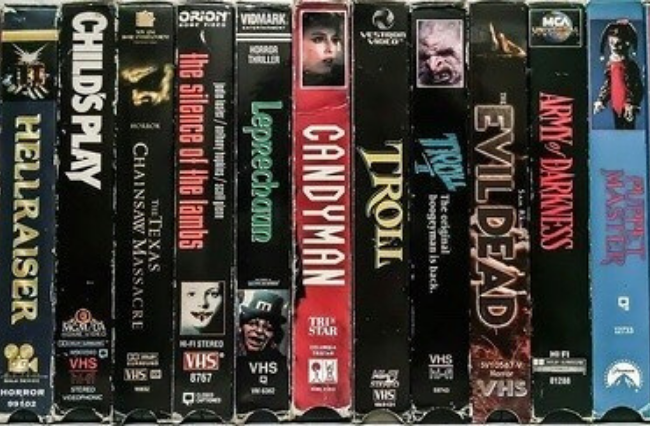 To some, the thought of being frightened is the worst thing imaginable, however, for horror fans such as Emily Carlson, this is something they regularly seek out, even from a young age.

“I always chased that feeling of, you know, being frightened or being like not knowing what was about to happen next. And then that definitely stemmed into my adulthood.”

For a lot of horror fans, the fascination with the macabre starts from a young age.

RMIT PhD student, Merinda Staubli, is studying how children’s horror content from the late 1990s and early 2000s has impacted its viewers as the audience has entered adulthood. She said at this time many programs began exposing children to horror content. This includes shows such as Goosebumps, a children’s horror show based off novels of the same name.

“It didn’t, necessarily, create horror fans, but it could have cultivated a horror taste and [an interest] in the horror genre,” she tells upstart.

This is also true for Carlson, who says her love of horror was cultivated by children’s series such as Goosebumps and Scooby-Doo.

“That’s sort of where it started with those sorts of novelty children-friendly thriller type books, and then it stemmed into the TV shows,” she tells upstart. “Then I started watching a little bit more adult type horror when I got older.”

Research published by a group of communications scholars in Pakistan found that for some young people watching horror films can act as a psychological catharsis, where they can experience fear in a controlled setting.

This was the case for Staubli as she says she watches horror films as a controlled space to express anxiety as someone who was easily overwhelmed as a child.

“When I watched horror shows, it was a sense of, having control over anxiety, it was being in a space where anxiety could be released and channelled into,” she says.

Similarly, participants in her research have also reported watching horror content to build confidence and prove their bravery.

“I do think that sense of control and feeling brave, can be appealing to a lot of young people, especially as lots of kids are trying to prove they have confidence. And [that] they are brave,” she says.

Risk-taking behaviours were another common theme in Staubli’s research for people watching horror from a young age.

“[A key pleasure of] children’s horror television is that it seems like a rebellious or naughty experience for them,” she says. “Whether true or not, they don’t believe their parents were aware of the frightening things they were watching”

Horror fans such as Carlson also attribute not only the risk-taking, but also the adrenaline rush as a reason why they enjoy horror.

“Growing up, I was always, a really big risk-taker. I loved engaging in, not necessarily, risky behaviours, but stuff that would give me that adrenaline kick,” Carlson says.

The researchers from Pakistan found that while there is a positive, in that horror content can be a safe space to experience fear, it can also cause anxiety and nightmares in children.

Staubli also found that participants in her study reported having nightmares or being frightened in the long term as children.

Despite this, Staubli says she found mainly positive impacts in her research, as a majority of the participants were horror fans. One of these positives being that it has assisted them in their social lives as they were able to find a likeminded community due to the genre’s influence on their hobbies and tastes.

“Some people remember these shows referencing subcultures like goth or punk scenes and seeing those characters in those shows and inspiring them to, dress like that themselves or be part of those communities,” Staubli says.

“Once they’ve found their peer group who share these interests, either as kids or later, when they’re older, is described as creating that sense of community of people who feel like they’re a bit different.”

Staubli found this is due to many viewers seeing horror as content that was “oppositional from the mainstream”. Carlson also shares this sentiment of horror being a more “niche” genre.

“You know, you’ve got your romcoms and old-style movies, that a lot of people watch but I feel like horror is either something you love, or you hate,” Carlson says.

Carlson also attributes horror to helping her create a sense of community with other friends who enjoy the genre.

“We are able to bond over them [horror movies] and our friendships have gotten closer, because we can sit down and watch those movies and be scared together,” she says.

Article: Chloe Jaenicke is a third-year Bachelor of Media and Communications (Journalism) student at La Trobe University. You can follow her @chloeejaenicke

Photo: #VHS horror movies by milo 3oneseven Images available HERE and used under a Creative Commons licence. The photo has not been modified.