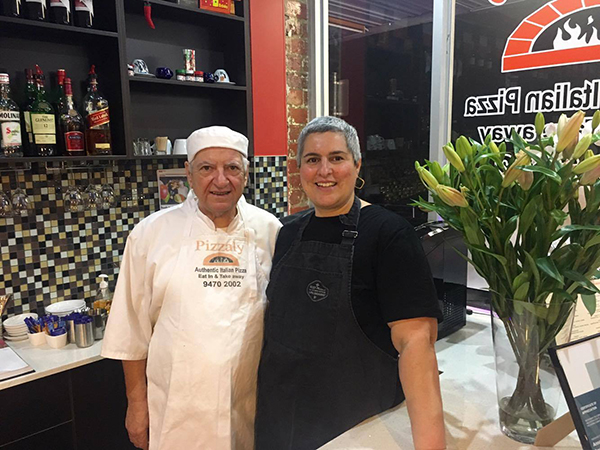 “Light, tasty and simple,” is the key to Silvio Serpa’s authentic Italian pizza.

Pizzaly Pizzeria, situated in Melbourne’s northern suburb of Preston won the title of Australia’s best pizza, at the Pizza World Championships in Italy earlier this year.

The award winning pizza thrives off fresh Australian produce but the owners won’t reveal which pizza won them the title.

With much speculation surrounding the margherita, Serpa and his wife and co-worker Anna Di Perna, say that it was not in fact the winning pizza.

“We are not going to say which one is the winning pizza, but it’s the type of pizza that it is. It is on the menu, it’s amongst the ones we do very frequently but we’re not saying exactly which one, just to avoid people asking for exactly the same pizza,” Di Perna tells upstart.

The team at Pizzaly are strong hearted about their pizza, believing people should go there not on the basis of the pizza that won, but on the basis of what their flavours and taste buds say to them.

The hype which was caused after the margherita was claimed to be the supposed number one saw Serpa make more margheritas in a week than he would in a year.

“A lot of people come in and say we want the winning pizza, well you know there is a whole team of them, knock yourself out,” Di Perna says.

Serpa takes such care and attention to detail when preparing his pizzas, it’s not hard to imagine how he placed first when representing Australia at the annual championship.

“There were 700 people participating in the competition, I wasn’t expecting that little old me from the other side of the world would be recognised for my work,” Serpa says.

Anna Di Perna, Serpa’s right hand woman, tells upstart that when Serpa was announced the winner “he was beside himself, in a sense of disbelief”.

With the rapid increase of popularity of the small business on Wood Street, Preston, since Pizzaly’s current success, Serpa says he owes his victory to simply cooking.

“Everything came from cooking. My passion for pizzas came afterwards,” he says.

“I began my career as a cook, then turned to pizzas to expand people’s vision and knowledge of what Italian food was about.”

Beginning as a bit of leap in the dark and something to pass the time, Serpa’s Pizzaly has grown into something he is extremely proud about.

Whilst many ask why Pizzaly has not expanded its business, Serpa is adamant he doesn’t want to compromise what he is doing or lose the spirit of his product for more space.

“People will just have to have a little more patience and we will try and fit as many people as possible,” he says.

Serpa’s ambitions for the future of the business are yet not known, but he is sure of one thing.

“I want to continue to have fun while working. It’s my passion, it’s not work,” he says.

Be sure to visit the very friendly Pizzaly team at 132 Wood Street, Preston, and see if you can pick the award winning pizza.

Molly Hancock is a third year Bachelor of Journalism student La Trobe University. You can follow her on Twitter:@Molly__Hancock.