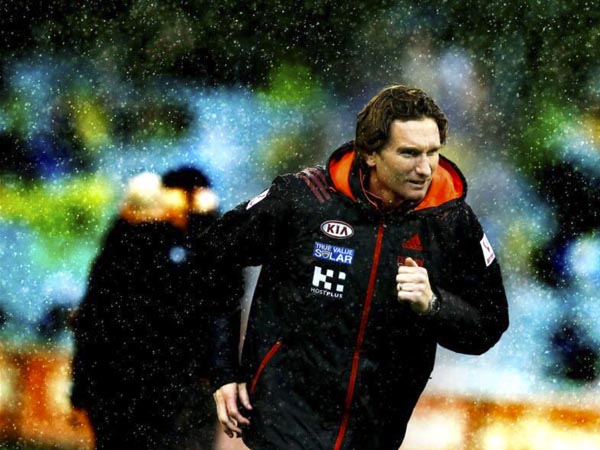 In his Supreme Court writ against the AFL, James Hird’s first act was to list the achievements of a long and storied career: so many wonderful footballing moments, all memories of a time gone by.

It is his achievements as a footballer that appear to have placed him on a pedestal by Essendon supporters, where his actions as senior coach during the drugs saga simply do not matter.

The sheer dedication of Essendon fans to the veneration and devotion of Hird eerily mimics that of a cult.

From the beginning, when the AFL called a press conference to inform the media that Essendon had “self-reported” to ASADA issues with its supplement program, the supporters were right behind Hird – as they had a right to be.

Supporting an AFL club is not something taken lightly in Australia. Often, you are born into a family of generational supporters, and you have no choice but to support or be excommunicated.

Essendon is an old and proud club. With 16 premierships, the club has earned its right to sit amongst the greatest of all time. The Bombers have produced champions like John Coleman, Matthew Lloyd, Dick Reynolds and James Hird – arguably the greatest player in its history.

But a careful examination of the response by Essendon fans to anything they perceived as “negative” or “biased” reporting reveals a darker side to the idea of supporting one’s club through the bad times.

Any journalist who dared to report the story was automatically slandered as an “Essendon hater”. This includes Walkley Award-winning investigative reporters for Fairfax, Nick McKenzie and Richard Baker, and The Age’s chief football reporter Caroline Wilson.

Furious Essendon supporters called talkback radio, flooding the airwaves with vitriolic diatribes aimed at the AFL, the Commission and Melbourne’s football media. Rumours of an AFL and media-led conspiracy against Essendon arose.

I was just on sen 1116 and they cut you off when it suits them its a conspiracy the media , AFL ,the age Caro ,robo,sleep better tonight

@brettacollett It had some interesting stuff outlining an AFL conspiracy theory. It's worth checking out the replay. IQ it, man.

Thanks to social media, the campaign to strike back against the AFL begun in earnest.

Twitter accounts sprung up, purporting to have “inside information”. Suddenly, every man and his dog had a source at Essendon, to the point where it was more difficult to find someone who didn’t have the inside word. Strangely, every nugget of internal information was always overwhelmingly positive.

Essendon supporters launched the wildly popular #standbyhird campaign. An army of desperate die-hards, willing to go to almost any length to defend their coach’s innocence with printed T-shirts, posters and stickers.

A march was planned before the Round 21 game against North Melbourne, which was reported by the Herald Sun. It was ultimately unsuccessful, with the Facebook event’s creator cancelling the march.

Yet all the while, the evidence was piling up. McKenzie and Baker reported information relating to drugs sourced in Mexico being administered to players. The Essendon fans turned up to the next game wearing sombreros and fake moustaches.

The charge sheet, which listed every alleged drug administered by Hird and his sports science team, was released by the AFL. Yet again, supporters cried conspiracy, accusing the league of publishing the sheet illegally to bolster public perception.

Perhaps the single most damning indication that Hird’s actions are above reproach at Essendon came last night, after the AFL banned Essendon from playing finals. Club chairman Paul Little, taking questions from the media pack, confirmed that once Hird’s AFL-imposed 12 month suspension ended, he would be welcome back at the club with open arms.

Pressed for information, Little announced that negotiations had begun to extend Hird’s contract beyond 2015. The move received widespread condemnation from the media and the wider football landscape.

Not so from the Essendon fans.

But it seems now that Hird has admitted guilt, and the club has accepted sanctions, Essendon supporters have reached a critical juncture. Their fight has been largely in vain, and they have been forced to accept their hero may not be as clean as they first thought.

Carlton’s salary cap violations meant the Blues missed out on Daniel Wells and Brendon Goddard, and were barred from the draft for two years. They were decimated by the penalties and endured nearly a decade of on-field hardship.

While Essendon’s penalties will not be quite so far-reaching, the short-to-medium term future of the club is tainted, and uncertain. No draft picks in the first two rounds in 2013-4 will undoubtedly impact its list going forward.

The fans have a right to be angry at the club.

It is time to exercise that right.

While they have fought what they perceive as the good fight, perhaps they need now to look within and realise that the club is greater than any one individual.

Even if that individual is their messiah.

Jordan Witte is a second-year Bachelor of Journalism (Sport) student at LaTrobe University. You can follow him on Twitter @wittsjw