Self-proclaimed country boy Jake Keating has found himself back in the rural landscape since graduating from La Trobe in 2014. He spoke about his media career with Jessica Gledhill. 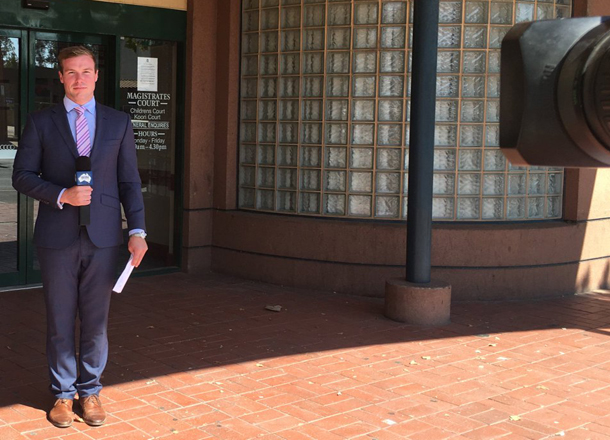 Being a journalist was never Jake Keating’s intention.

“I originally signed up to do sports management, but I did a bit better on my ATAR than I thought I would. It opened up a few more doors and after I did a bit more digging…saw sports journalism and thought why not?”

Since then, he hasn’t looked back.

Keating underwent an internship with the Essendon Football Club during his final year of a Bachelor of Journalism (Sport). He was then able to secure a paid role within the organisation.

“I reached out on Twitter and luckily enough tracked down someone inside the club to have a few coffees with,” he says.

“In terms of what I do now it was pretty critical. Getting in there and sinking my teeth into it, learning how it all worked in a big organisation, and meeting lots of people within the industry was pretty surreal.”

During his time at La Trobe, Jake was also highly involved with upstart as a sports co-editor, contributing to a number of podcasts and working as a panellist on the 2014 Grand Final Live Stream.

“Learning how that whole experience worked, working in a team and bouncing ideas off one another, and learning the different aspects of how to put a live production together was pretty amazing,” he says.

He now works on a full-time basis as a broadcast journalist for Win News Shepparton. Jake admits that the workload is pretty full–on covering a minimum of two news stories per day across the area.

“It’s a big region, the Goulburn Valley… It’s a lot of time in the car and you have to be mindful of your time management.”

In terms of the future, Jake isn’t too concerned about where his career might lead. Instead he is focusing on the role he has now and the experience he can gain.

I’m just taking everything as it comes with both hands and giving it my uncommitted passion and getting straight into it.”

He attributes the career he has now to always working hard and constantly striving to make a good impression. He encourages those aiming to work in the media to do the same.

“Just get yourself out there and meet as many people as you can and sort of build those relationships”, he says.

“You always just want to get that foot in the door, and putting my head down and bum up got me to where I am now.”

Jessica Gledhill is a third year Bachelor of Journalism (Sport) student at La Trobe University. You can find her on Twitter: @JessicaGledhil4.