After breaking her neck in a trampoline accident, Bree Mellberg did not let her disability stop her from pursuing her love of sports. 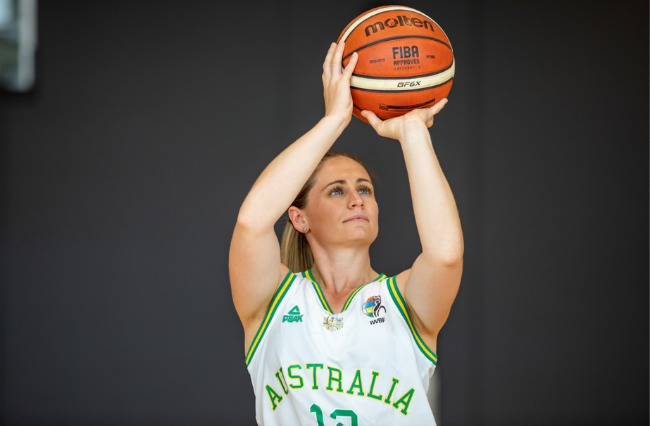 “When I was younger, I would always say to my parents I wanted to go to the Olympics.” Those words have been Bree Mellberg’s biggest motivator ever since she was a child, though her eventual pathway hadn’t been the one she originally planned.

And through those words, her ‘stubbornness’, her talent, and her perseverance, she’s evolved into one of Australia’s best wheelchair basketball players. But it hasn’t all been sunshine and rainbows for the Ann Horrocks Stem Award winner.

As a child, and even now as an adult, Mellberg would jump head first into things she was interested in.

“I have a tendency to rush into things and I think sometimes that can get me into a little bit of mischief,” Mellberg told upstart.

Like lots of kids, she had a passion for sport, starting out as a gymnast at the age of 3 before changing to diving at 13. She became immune to a demanding training schedule but did at times find it difficult to juggle other commitments.

“When I was doing gymnastics, I trained probably 10 hours a week. And then when I was diving, I moved down to Melbourne and I was training 40 hours a week whilst trying to do year 12 as well, which was very challenging,” she said.

But with a fall off a trampoline breaking her neck three years after finishing her diving career, her whole life changed in a matter of moments.

“I went from being completely independent and being at university to having my mum as my full-time carer, and spending most of the week doing rehab.”

Although, at first it was hard for her, she found something she instantly fell in love with: wheelchair basketball.

“I instantly loved it. It was going at high speeds, I was able to push away in a different chair and feeling the rush was amazing. You felt like you could go fast again.”

She started playing for the Bendigo Wheelchair Braves, was then picked up by the Victorian team Kilsyth Cobras, and then was selected a year later to play for the Australian Gliders.

“My transition was very quick mainly because as an athlete I knew how to train, I knew how to work hard and to push myself,” she said.

“I think it was recognised very quickly by the coaches that I had some talent in me.”

She has not only excelled in her sports, but has also shone in her academics, completing a Bachelor of Science at La Trobe University and is currently doing a PhD in Cancer Biology, Cell Polarity & Tissue Architecture.

She said she was always keen on “what happens to the human body when it’s going really well” or “how terribly wrong it can go”.

“I also found that Biochemistry and Anatomy and Physiology were the things that I was really passionate about so I continued to pursue them through honours and then into postgraduate study,” she said.

Though with COVID-19 restrictions, she has found it hard this year to get any of her lab work done.

“I’m now at the point in my PhD where I’m needing to do a lot of lab work. So not having access to the university and being able to undertake lab work has certainly been very challenging.”

Yet whilst there is a disadvantage, she’s also found this as a “little bit of a gift”, as she’s been able to read a lot in preparation for her “upcoming one-year (PhD) confirmation”.

“I’ve been able to spend the last six to eight weeks learning a lot in terms of reading a lot of papers and writing my literature review.”

She also has her hobbies outside of university and sport too.

“I’m a big fan of doing jigsaws and I really like travelling. I like being able to go and explore other cultures.”

She is currently hoping to go to Tokyo as well as play a part in the 3×3 Basketball in the 2022 Commonwealth Games.

“I think if there was another athletic milestone that I’d be looking at, it would be the 2022 Commonwealth Games for 3×3.”

Josh Ward is a second-year Media and Communication student (Sport Journalism) at La Trobe University. You can follow him on Twitter @JoshWardyJr1.

Jordan Janssen is a second-year Media and Communications student (Journalism) at La Trobe University. You can follow him on Twitter @JJordy1210.

Esther Rubio is an exchange student in the Bachelor of Media and Communications. You can follow her on twitter at @ethrbo