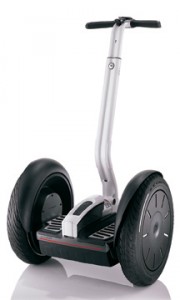 I never thought I’d find my perfect match online. But then I found a small blue link on the side of the screen: ‘Compatibility Test’, it read. What did I have to lose?

The results were impressive; apparently my life would be improved emotionally, financially and geographically. But this was no lovelorn billionaire willing to take me places. Step aside boys, I’ve found my soulmate — the Segway PT i2.

Segways are personal transporters: electric, eco-friendly vehicles that allow their users to glide around freely and enjoyably. Riders simply stand on the Segway, hold on to the handle, and lean in the direction they want to travel.

Segway creator Dean Kamen wanted to design an environmentally friendly form of transport and came up with a battery-operated design that wouldn’t leave any nasty impacts or fuel emissions. It is powered by lithium ion batteries, and as a result is said to be 11 times more efficient than the average American car.

There are two settings on each Segway: a beginner mode, which reaches up to 13km per hour, and a standard mode, which allows riders to reach up to 20km per hour. There are also weight restrictions for Segway users; riders should be between 45kg and 115kg.

‘In the USA,’ he says, ’50 per cent of all car trips are less than five miles — a perfect trip on a Segway PT, thus resulting in reductions in greenhouse gas emissions and fossil fuel use.’

Here in Australia, where  over 80 per cent of our nation’s electricity is produced by fossil fuels, their environmental credentials are less impressive.

While the Segway isn’t especially popular in Australia, people overseas hold their PTs in high regard, using them for trips to work, the shops, or purely for leisure. There are even city tours conducted in the United States, Europe and Sydney that give tourists the opportunity to glide through landmark destinations, a fun bonus for both you and your feet.

Seamus Daly, a tour guide from Europe, has been operating his expeditions in Denmark since May last year. It was a job he chose out of sheer jealousy.

‘After trying a Segway tour in Barcelona, I really liked it and was envious of the guy’s lifestyle running the business,’ he says.

Daly spends over two hours at a time on his PT i2 gliding through the streets of Copenhagen with a steady legion of wheeled followers behind him.

He says 99 per cent of the people on his tours generally find the Segway easy and natural to ride, and are drawn to the fact that they are so unique.

‘The appeal comes from experiencing something that is totally new and fun,’ he says.

Has anyone ever attempted a getaway?

‘No one has ever tried to escape,’ he says, to my slight disappointment. I was hoping for a detailed account of a runaway Segway with a horde of other riders on its tail.

‘But on a couple of occasions,’ he continues, ‘people have let them go in the lakes and have lost the tour, but I have always managed to find them again.’

Daly says that Segways in Denmark are classed as bicycles and must conform to bicycle regulations. He says they are a ‘niche market machine’ throughout Europe.

‘Laws still have to be harmonised,’ he says. ‘People don’t generally have them for private use.’

Segway’s Matt Dailida says that 44 states in the US have passed laws in favour of the Segway, while in Europe, 12 nations allow their use. There are also several nations in the Middle East and Asia which also allow Segways to operate.

Safety is also an issue, especially since the death of British Segway company owner Jimi Heselden in September. The businessman had only taken control of the Segway branch last year, but was killed when he fell off a cliff in England while riding his PT.

But as with any form of transport, safety measures should always be taken. As the site explains, ‘the Segway PT is a breakthrough technology, but it’s not magic’.

I’d read enough stories about people having amazing rides on their Segways. It was my turn to test out the slick set of wheels. It was just a matter of finding one in Melbourne.

Just when travelling to Copenhagen seemed like my best possible choice, I came across Southern Cross Segways, formerly operated by enthusiast Michael Mote.

I stepped into the office, and immediately the Segway and I locked stares. With its sturdy wheels and slender frame, I was already in love.

Mote brought the Segway outside and activated it with a small key. It powered up without any noise. I held onto the handle and tentatively stepped on.

‘Congratulations,’ says Mote. ‘You are now standing on a Segway.’

In less than a minute, I had learnt how to move forward and backward (simply by leaning either way), and left or right using the navigational dial.

After spinning in circles a few times (which I got the knack of quite easily), Mote advised me to simply step backwards to get off the PT. This proved to be the difficult part as, when I leaned backwards, the Segway came with me. But, as he pointed out, this was because it hadn’t been set to my weight and height.

Once the fun part was over, it was time to find out exactly how the Segway works. Mote showed me a circuit board, the internal computer found within each PT.

‘This is a dual redundant system,’ he says.

Basically, this means that there are two identical computers—if one was to stop working, the other would step in and continue the job.

‘If your PC at home were to stop working,’ he says, ‘you’d think ‘What a pity’. But if you were on a plane and the system were to break down, you probably aren’t going to have the same response.’

Just as an aircraft needs to have a backup system, so too the Segway needs  to keep the rider safe. Mote also points out a series of gyroscopes, the technology that allows the Segway to determine and respond to a rider’s movements.

Not everyone approves of these smooth-moving comrades, suggesting that they are instead a device for lazy individuals. But Mote defends the Segway.

‘It doesn’t replace walking,’ he says,though I couldn’t help thinking how much more enjoyable it would be checking the mail each day.

And with its good looks and considerate nature, there’s a good chance the Segway PT i2 will be warmly accepted as a new member of the family.