Having something you love ripped away from you takes its toll. 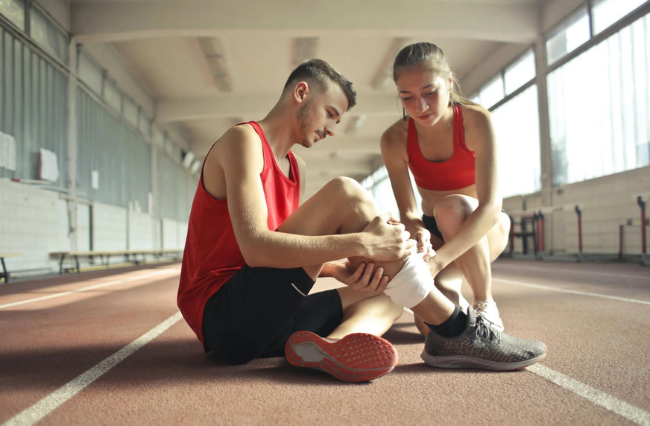 “It felt like I got shot in the kneecap.”

That’s how bad the pain was for semi-professional soccer player Jem Burkant, when he ruptured the anterior cruciate ligament (ACL) in his left knee playing football in 2017.

“My dad heard it from the sideline, everyone heard it on the pitch … it was a big pop and then the worst pain I’d ever felt,” he tells upstart.

What followed is a familiar story for other people who are taken away from the sport they love through injury. The social, mental and physical battle begins as the journey to recovery ensues. Famous athletes receive sympathy and attention when they succumb to serious injuries, however, there are also countless amateur sportspeople who suffer a similar fate without as much support and resources.

Burkant, a 27-year-old construction engineer who has been playing soccer since he was five, struggled mentally after he discovered the extent of the injury and underwent surgery.

“I had to work through, I wouldn’t say depression, but two weeks of some dark days, contemplating ever playing again because it put me out of work, put me out of everything,” he says.

Although Burkant says he never quite fell into a depression, this isn’t uncommon, according to psychologist Daniel Chable. He lists “feelings of loss, anxiety and symptoms of depression” as common psychological symptoms when people lose the ability to participate in recreational sport.

And what could be worse than rupturing your left ACL? Turns out it’s rupturing your right one two years later. Burkant’s psychological strength was tested further after he succumbed to another long-term injury in 2019.

“A second ACL was a big challenge mentally,” he says.

“It was just like, do I get a break? Is this God telling me to stop playing? Yeah, it was tough.”

Someone who can empathise is 21-year-old Meghann Brown, who suffered repeated injuries during her dance career, which ultimately ended her ability to participate in an activity that she loved.

“I was dancing my whole life, and when I was about 15 I just started feeling pain in my hip … I ended up having to have surgery. I had two tears in the ligaments in my hip and a dislocation as well, all caused by dancing,” she tells upstart.

“I tried going back to doing a little bit of dancing, but it still wasn’t the same. I didn’t have the same flexibility …  then I tore my hip again and I haven’t danced since.”

The mental battle for Brown was compounded by both the pain associated with her injuries and not being able to dance. So much so, she sought help from a psychologist, psychiatrist and GP.

“I would dance almost every night after school and every day. Basically, I kind of lost something that I used to love,” she says.

“I’ve also been having pain for seven years now … and that’s taken a bit of a toll on the mental health because it’s just hard to deal with pain all the time.”

In addition to the physical and mental struggle, not being able to join in with friends and teammates every week can leave a big gap in a sportsperson’s social life. Chable says there’s a “huge” psychological impact on a person if they lose these social connections.

“Supporting and encouraging network connections so people can retain their social connections [is important],” he tells upstart.

While Burkant was able to maintain contact with his teammates, he says being unable to line up with them on gameday definitely left a hole in his social life.

“They were there for support, but it’s not the same as being in a changeroom and being in the team when you’re playing,” he says.

Brown lost her social connections entirely after she was forced to stop dancing. Given her commitment to rehab and physio, it’s no surprise there was little time to keep in touch with friends.

While rehabilitation can be difficult for all athletes, for non-elite sportspeople like Burkant and Brown, it can be an even greater challenge. Burkant, who completed his rehab for both his ACL injuries, details just how testing it was.

“Getting that strength and conditioning back at the start was hard,” he says.

Unfortunately, Brown has never quite recovered from her hip injuries. She is finding it difficult to maintain positivity after dealing with rehabilitation for so long.

“I’m still doing physio to this day, trying to get hip strength back and relieve the pain. It is really hard to get motivation because I’ve just been doing it for so long,” she says.

There’s no happy ending for Brown yet, and she says there’s “there’s still a bit of a hole” left from her dancing days. For Burkant, things are looking brighter. He’s back out on the pitch doing what he loves.

“It’s incredible man, I can’t take it for granted anymore. Being on the field is a blessing.”

Article | Tarquin Oakley is a third-year Bachelor of Media and Communications (Sports Journalism) student at La Trobe University. You can follow him on twitter @TarqOakley.

Photo | Woman Wrapping Man’s Leg with Bandage By Andrea Piacquadio is available HERE and is used under a Creative Commons licence. The image has not been modified.