Is umpiring considered to be a job or a hobby? 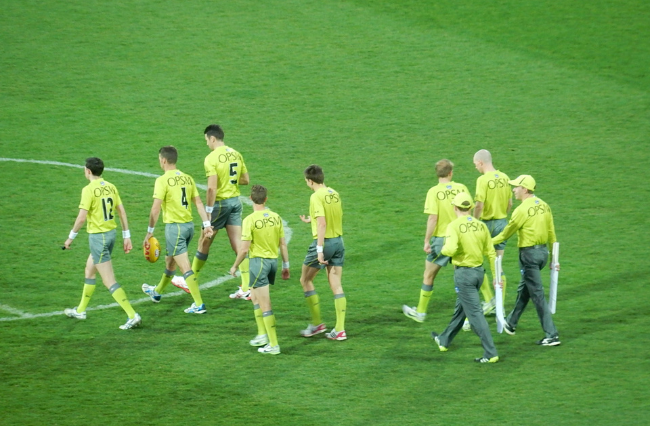 Juggling a full-time job, your family and social life can be a struggle. For umpires, there are also the added responsibilities that come with attending weekly training and online coaching sessions. This is only the beginning of what is expected. Umpires also have to review vision, complete extra training and gym sessions, and diet properly.

Having the right work-life balance can be hard when working a full-time job, even more so when you have two of them. For the past decade, there has been discussion over whether umpiring should be a full-time job in itself.

Conversations between the AFL and the Umpires Association (AFLUA) first began in 2012. These initial talks were short-lived however, after then newly appointed umpiring director Wayne Campbell said that it was unlikely that umpires would move to full-time employment in a 2014 interview with AFL.com.au.

“I don’t think umpires will go full-time because I just don’t think you would be able to fill in the hours,” he says.

A European study tour in 2016 reignited the conversation. After seeing examples of how full-time officials worked in other sports, the interim umpires’ boss at the time, Luke Ball, said that the AFL could have a full-time umpire in the “not too distant future”. This was reflected in the 2017-2022 Collective Bargaining Agreement, stating that the AFL and the AFLUA would work closely on the “possible appointment of up to two full-time umpires”.

Yet, in the final year of the current agreement, there is still no sign of umpires going full-time. So how do people juggle their umpiring commitments and their other commitments?

Lisa Compton-Robbins is a first-year VFL development squad field umpire. She also juggles her firefighting job at her local CFA, as well as a paramedicine degree at Victoria University. Her football and CFA commitments keep her busy four nights a week, and Saturdays, of course, are for football, too.

While VFL football is her top priority, Compton-Robbins says she also wants to ensure that she has time to herself.

2019 AFL Grand Final goal umpire Michael Craig also looks for a lifestyle that gives him a sustainable balance between his retail work, umpiring and personal life. Craig says that the key to managing his time efficiently is ensuring that there is flexibility in his schedule.

“I have certain things that I want to achieve every week. So, I know that I want to train at least three times. Obviously, I’ve got fixed commitments on a Tuesday night and a Wednesday night with coaching and training. But outside of that, I try and keep it pretty fluid,” he tells upstart.

The goal umpire says his employers at his full-time job, 7-Eleven often do what they can to help work around his busy schedule, flexibility he wished he had early into his umpiring career.

“Years ago, I was in probably in far more challenging type roles… [I was] almost always dealing with things outside of hours and on weekends,” he says.

One reason the new Collective Bargaining Agreement won’t feature full-time umpires is because the AFLUA CEO Rob Kerr says that the pandemic has taught them that some requirements can be conducted remotely.

“Probably one of the outcomes from COVID has demonstrated that a lot of the umpiring coaching and training can be done flexibly and independently, [instead] of having to come to a central venue,” he tells upstart.

For Michael Craig, umpiring is something he does for pleasure alongside his other job.

“I actually think that umpiring has found a really nice balance of being still able to work and maintain secular employment, that stimulates the mind, gives you longevity post-football career, plus also being able to absorb what is a pretty spectacular hobby,” he says.

“I still only think about it as a hobby. It’s something that I love doing, and I would do it if there wasn’t any financial component to it.”

Jackson Mansell is a second-year Bachelor of Media and Communications (Sports Journalism) student at La Trobe University. You can follow him on Twitter @jackson_mansell

PHOTO: Green Men by Michael Coghlan is available HERE and is used under a Creative Commons licence. This photo has not been modified.