The past decade has seen a rise in feminist movements that have reframed the narrative around the body and sex. 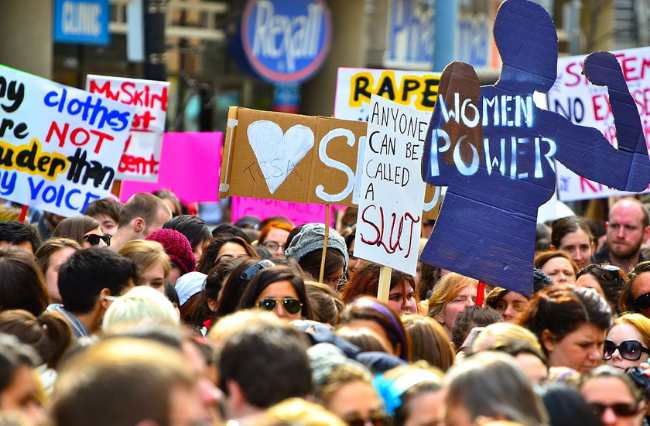 Over 2,400 years ago the ancient Greek playwright Aristophanes created the heroine Lysistrata – the protagonist in a comedy of the same name. Her name, often translated as “Liquidator of Armies”, represents her role in brokering peace with the warring Athens and Sparta, echoing Aristophanes’ very real anti-war sentiments.

This peace was brought about by a cunning tactic unheard of in the ancient world. Lysistrata gathers the women of the conflicting nations and suggests they use their position as the lovers of their men to withhold that which they want most – sex. This protest causes many antics to ensue but eventually, it works.

In a time when democracy was in its infancy and women were largely restricted from state affairs, the content of Lysistrata – with its all-male cast no less – was successful in its comedy through the absurd reversal of social norms by placing women in power.

Now, over two millennia later in what has been called “The Age of Mass Protests”, women around the world are embodying the fictional Lysistrata and are finding unique ways to wield power and to protest.

A recent report by the Center for Strategic and International Studies found that an upward trend in mass protests was occurring worldwide, with a yearly increase of around 11.4 percent from 2009 to 2019. This 10-year period also saw the rise of organisations and movements that challenge typical forms of protest, such as FEMEN and SlutWalk.

FEMEN originated in Ukraine in 2008, first combatting the increase in sex tourism and “sexpats” seen in the country by dressing up as “sexy nurses”, as the Kyiv Post reported. Their attention-grabbing tactics soon spread to other European nations and eventually found their way abroad.

As their ideas solidified, the term “sextremism” came to define their direct-action protests of topless activists who bear slogans painted on their bodies.

“Sextremism is a non-violent but highly aggressive form of provocation; it is an all-powerful demoralizing weapon undermining the foundations of the old political ethics and rotten patriarchal culture,” the FEMEN website says.

Dr Lauren Rosewarne, a senior lecturer at the University of Melbourne who writes and researches on gender and women’s studies, says this tactic has set FEMEN and other “bodily-based” protests apart and has allowed them to gain the attention of the media.

“The activism landscape is crowded – with lots of voices and causes vying for attention – so movements need to have something that makes them stand out and gain attention,” Dr Rosewarne told upstart.

“Part of the cleverness of some of these activist strategies – and, also, part of their success as related to consciousness-raising – is through irony and reframing the narrative.”

Where FEMEN uses nakedness to reframe the narrative surrounding the female body and sex, SlutWalk uses words and clothing to achieve the same outcome.

SlutWalk has similarly been fighting for women’s sexual rights since 2011 with the specific aims of ending slut-shaming, victim-blaming, and rape culture.

After a Canadian police officer sparked outrage by saying “women should avoid dressing like sluts in order not to be victimised” to a group of students during a lecture on personal safety at York University, the movement emerged and spread around the globe, reclaiming the word “slut” and the meaning attached to clothing for their own purposes.

“We demand that shame of rape and abuse lay with the perpetrator of abuse, not with the survivors of assault,” a SlutWalk Melbourne representative told upstart.

“SlutWalk Melbourne rejects slut as a slur, casual consensual sex is nothing to be ashamed of. Rape is about power and control, it has nothing to do with what someone is wearing, saying or how they’re behaving.”

TEN YEARS OF SLUTWALK! To celebrate SlutWalk Melbourne are creating and curating a retrospective documentary with a lil help from our friends at @simoneziada @SlutwalkMunich @SlutWalkTO Salt Lake City, Salzberg, @slutwalkjhb and many many more! pic.twitter.com/DeRaGyxNEP

Though the politicisation of the female body has risen in mass protest only recently, the tactic has its origins in the women’s suffrage movements of the 19th and 20th centuries and the women’s liberation movement which began in the ‘60s and continued through the ‘80s.

In Australia, the liberation movement spawned many feminist films that tackled gender issues through creative and often unconventional means.

One such film, 1976’s We Aim to Please, explores sex, violence, and beauty standards as dictated by the typical male viewer. Like FEMEN, the film’s message is shown written across the nude body of one of its female creators.

“The ideal spectator is always assumed to be male and the image of woman is designed to flatter him,” the film’s creators say together.

Dr Mary Tomsic, a research fellow at the Australian Catholic University and gender historian, has written on We Aim to Please and other feminist films from this era. She says these were often criticised within feminist circles for being “too sexual” – an argument that endures to this day despite changing attitudes.

“I think we have seen women’s use of bodies in different ways in different times, but I guess there is more open discussion about sexuality now,” Dr Tomsic told upstart.

This newfound openness doesn’t always agree with those supporters of FEMEN or SlutWalk who aren’t comfortable protesting in the nude, as one 2018 journal article discussed. These tactics, as Dr Tomsic says, are underpinned by the limited standards of beauty.

“We learn to find particular things beautiful and desirable in part and I think that often is quite a limited view of what is beautiful, desirable in those sorts of ways,” she said.

However, SlutWalk Melbourne ensures that all are welcome at their next rally, no matter how few or how many clothes they decide to wear.

“Folks who participate in the march are invited to dress as they please and in what makes them feel good,” a SlutWalk representative said.

“The march provides a space for people to feel safe in expressing themselves, their identity and their sexuality however they choose fit.”

Photo: Toronto SlutWalk by Anton Bielousov available HERE and used under a Creative Commons Attribution. The image has not been modified.