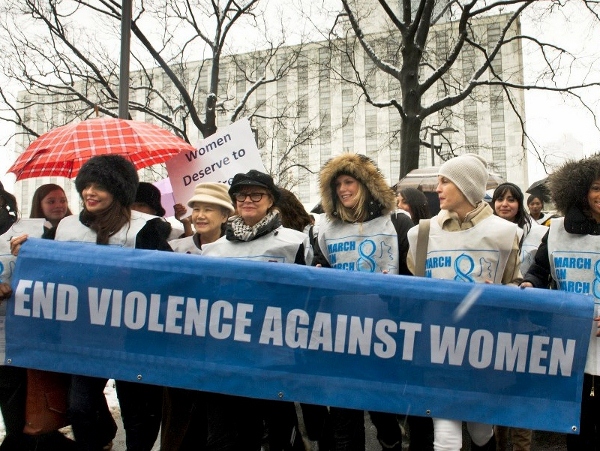 Last Friday was the United Nations’ International Women’s Day, with the theme for the day being “A promise is a promise: time for action to end violence against women”.

In an address to the UN on Friday, Secretary General Ban Ki-moon called for the end of violence against women in all forms; physical and psychological.

He stated that there is a statistical likelihood that most women in every community will or has faced violence in their lifetime. According to UN statistics 608 million women live in a country where domestic violence is not considered a crime. Just as terrifying is the data that shows seven in ten women will experience rape or abuse in their lifetime, regardless of where they live.

The executive director of the UN Entity for Gender Equality and the Empowerment of Women (UN Women), Michelle Bachelet also spoke at the UN event commerorating International Womens Day.

“I have hope because awareness and action are rising for women’s rights. A belief is growing that enough is enough,” she said.

Bachelet added that the issue of violence against women is a global problem and that it stands in the way of all forms of progress.

2012 saw shocking crimes of violence against women around the globe, many resulting in a huge outpouring of anger and grief. Here are three of those stories.

The rape and murder of Jill Meagher

On the 22nd of September 2012 Meagher, a 29-year-old employee of the ABC went missing while walking home from a bar on Sydney Road, Brunswick. The search for Meagher quickly attracted significant media attention.

Social media played a large role in raising public awareness of her disappearance. Just days after her abduction, a Facebook page, “Help us find Jill Meagher” received over 100,000 likes. On the 28th of September Adrian Bailey, a suspect in the case, led police to a shallow grave where they discovered her body.

Bailey was then charged with her rape and murder. Two days later a public march down Sydney Rd. was organised in Meagher’s memory. Over 30,000 people took part, with many voicing concerns about violence against women.

Malala Yousafzai is an education and children’s rights activist from the Swat Valley in Pakistan. At the age of 12 Yousafzai wrote a blog for the BBC detailing her life under Taliban rule and promoting education for girls. She soon gained recognition and was the subject of a 2009 documentary by The New York Times.

Malala was shot in the neck and head while returning from school on the 9th of October 2012, an act the Taliban claimed responsibility for. After receiving emergency surgery she was taken to the United Kingdom for further medical treatment. The assassination attempt received worldwide media coverage and condemnation. It also sparked protests in cities all around Pakistan.

The gang rape of a medical student in India

On the 16th of December 2012, a 23-year-old student was raped by six men on a moving bus in New Delhi. She was then beaten with an iron rod and thrown out of the bus and on to the side of a road. The victim died days later in a Singapore hospital.

The case sparked days of mass protests at government offices all across New Delhi. Thousands gathered to call for more laws to protect the women of India. Sexual assaults go largely unreported in the country, however figures released by the Indian government states that a woman in the country gets raped almost every 20 minutes. To mark women’s day the US announced they would award the rape victim the International Women of Courage Award.

With this year’s Women’s Day focussing on violence against women, it seems the public concern over this issue is being heard, a sentiment echoed by Navanethum Pillay, UN High Commissioner for Human Rights, in a message released in support of the event.

“Public demands for action to end the routine atrocities so often experienced by women and girls have inspired government leaders to make important statements of intent, and stung apathetic police forces into launching investigations,” Pillay said.

She also warned however, that in order to make a real difference, it is vital to make sure the attention the issue is now gaining does not fade.

Zainab Hussain Shihab is a third year Journalism student at La Trobe University. You can follow her @ZainabShihab.