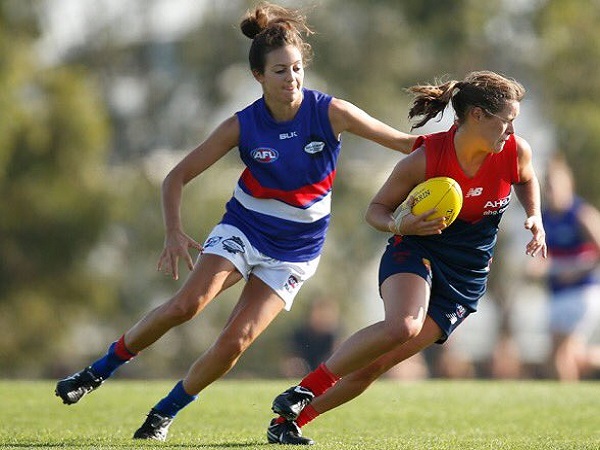 The match will be the final AFL Women’s exhibition match between the two clubs before the Demons and the Bulldogs join six other clubs in the inaugural AFL Women’s League.

Saturday’s fixture will be the first match played under lights at the Bulldogs’ West Footscray oval and the final chance for the players to show their skills before the inaugural draft.

The clubs have already nominated 16 marquee players for next season and will be using the exhibition match to assist with draft selections.

Western Bulldogs captain, Stephanie Chiocci says the team is very excited for the opportunity and the weekend coming.

“We’ve been training for a few weeks but it’s quite hard to get all the girls together,” she tells upstart.

“Now all the girls are here we’ll have a camp Thursday and Friday where we can do our tactical sessions, game analysis and recovery as team.

“For us, this is like our major final … we can showcase the best talent in Australia and put it on Whitten Oval which we’re really excited about.”

The Western Bulldogs women’s team met up with the men’s squad on Thursday for lunch followed by their first training on Whitten Oval.

Chiocci has played in each of the previous three Hampson-Hardeman cups and says Saturday’s game will be emotional for her.

“It’s a really good opportunity for us to honour the Bulldogs as well as the Melbourne football club who have invested so much in womens football.”

This weekend’s game may be the last game that some of the girls play for Melbourne or the Western Bulldogs as they enter the draft before the upcoming season.

Among the departing bulldogs are Emma King and Moana Hope who have been marquee listed by Collingwood for next season.

“There is mixed emotions from some of the girls that are marquee listed at other clubs,” Chiocci says.

“It will be difficult for those girls to get their head around it but once they’re out there they’ll play to the best of their ability.

“It’s sad to see Mo (Moana) go, she’s a close friend of mine and she’s such a genuine person, the club will sad to not have her next year.

“She’s such a good player, I’m sure she’ll thrive at Collingwood.”

Moana Hope, a star for the St Kilda Sharks in the women’s VFL was featured on ABC’s Australian Story this week.

Chiocci, a secondary school teacher is yet to be picked up by a club but is looking forward to the draft.

“I could even end up at Collingwood and get to play with Mo again, it’s all a bit uncertain at the minute.”

Despite Chiocci’s dedication to the Bulldogs she is happy to move to any Melbourne club that picks her up in the draft.

“I’m actually a Carlton fan, so the lifelong dream is to pull on the navy blue, but I’ll play for any club that values me and wants me to play for them.”

“Obviously I’d love to come back to the Bulldogs, I was their first pick in 2013 and if I can continue my journey with them then I’ll take the opportunity with both hands.”

Chiocci believes that the future of womens football is bright and says next years eight team competition is just the starting point.

“I definitely think that one day this could be a full time career for women.”

It has been announced this week that players not marquee listed will receive $5000 for the eight week season.

AFL boss Gillon McLachlan hit back at critics about the pay gap for female players in the upcoming season on 3AW’s Sports Today.

McLachlan stated the comparisons between the male and female footballers wages were unfair.

“The total player payments for the seven-week season will be about $1.6 million next year,” McLachlan said.

“We’re investing in coaches, conditioning, facilities and starting this league from scratch.

“That will build from many millions in year one and will be tens of millions of dollars over the next five years.”

The previous meeting between the Demons and Bulldogs was in March at Highgate Recreation Reserve, with the Bulldogs running out 20-point victors.

The match will be broadcast live on the Seven Network and Telstra via the AFL Live and PLUS 7 applications from 7.20pm.

A youth girls’ match will be played as a curtain raiser to the Hampson-Hardeman Cup match, with admission to be free and fans to have the opportunity to enjoy a kick on the ground after the main game.