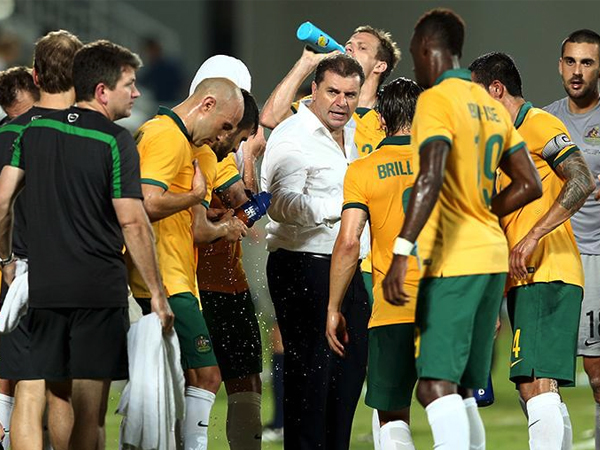 He was the man tasked with rejuvenating an ageing Socceroos outfit devoid of quality and creativity.

But the honeymoon period for Ange Postecoglou is over.

A dire 1-0 defeat to Asian rivals Qatar is the latest setback during a post-World Cup hangover that has resulted in the Socceroos slumping to an all-time low of 94 in the FIFA World Rankings.

With a final test against fierce rivals Japan ahead of next year’s Asian Cup, The Age football expert Michael Lynch believes the team’s poor form is a cause for concern.

“Their form has been poor, there is no getting away from it,” Lynch tells upstart. “They got away with it in the World Cup because the expectation was at such a low level.”

The Socceroos may be floundering at present, but if the form of Australia’s youth teams are anything to go by, things may get worse for Postecoglou before they begin to improve.

The failure of the Young Socceroos to qualify for next year’s youth World Cup in New Zealand symbolises another missed opportunity to fine-tune a group of young players who are likely to form a large part of the 2018 World Cup squad.

Postecoglou’s desire to regenerate the Socceroos is evident. For too long there has been an over-reliance on aging stars like Tim Cahill and Mark Bresciano to patch over a glaring deficiency in the quality of the team’s younger contingent.

But if Australia’s under-age teams continue to fail, the Socceroos may have to count on its veterans for a little while longer.

“There’s no stars coming there to plug the gap in the immediate future,” Lynch says.

“The coach [Postecoglou] sold everyone a narrative that people wanted to hear; that this is the breakup of the old guard and the creation of a new team and a new squad for the future.”

“To say that you are relying on 35 year-olds like Cahill and Bresciano to be your key players is a bit of an issue I would have thought.”

With the FFA currently celebrating the tenth season of the A-League, the domestic landscape of Australian football has never been in better shape.

But the underlying question remains: why is our national team failing when the A-League continues to grow and prosper?

Part of the answer may lie in the remnants of the old National Soccer League.

The NSL may have been riddled with a number of issues ranging from financial instability to poor senior management, but it was successful in creating a golden generation of Australian talent.

Top NSL clubs such as Melbourne Knights and Sydney Olympic possessed youth structures which encouraged player development all the way down to primary-school aged footballers.

Lynch believes the A-League needs to replicate this system to broaden the talent pool available to the competition and the national team.

“On every metric, the A-League is superior to the NSL except for one: It’s not yet producing the players that the old NSL used to produce,” Lynch says. “The old traditional clubs, because they had senior teams in the national league, they gave a focal point to the kids playing in the juniors there.”

“Once the A-league sides develop junior structures below the youth team it may start to help with a broader development of players.”

“They have to create conditions where more kids get to play the game… and the development of players continues and improves so our home-grown players can produce a strong national team and a high quality product on the pitch here.”

The introduction of the FFA Cup this season has been an incredibly successful step in rebuilding relations between clubs in the re-branded National Premier League (formerly the NSL) and the A-League.

Lynch believes reconnecting historic grassroots teams with the top tier of Australian football is a critical step in the development of the game.

“It is vitally important,” Lynch says. ”Without those traditional clubs, there wouldn’t be an A-League.”

“I think it’s fantastic after an initial period of alienation where the FFA attempted to cast the traditional clubs out, they’re now opening up and allowing some measure of connection again with those teams.”

“The FFA Cup is the vehicle that it is being done through and the interest it is generating in its first season is reflective of the role those clubs can play.”

However one major advantage the A-League has over its predecessor is the presence of foreign investment.

But it is City’s significant investment in youth development programs which should aim to provide a template for other clubs follow and develop a consistent stream of talent.

The creation of the Melbourne City College of Football provides a resemblance to the old junior age setups of the NSL era, and Lynch believes that any future foreign investment will entail a strong interest in youth development.

“If there is to be any future investment along the Manchester City model, they’ll be interested in developing players,” he says.

“Manchester City have made it clear that they want Melbourne City to become a nursery alongside New York City FC.”

“In an ideal world, if they nurtured a player from the age of 13 or 14 in Melbourne and he was good enough to play in Manchester City’s first team, then that would be the ultimate expression of productive investment.”

When asked if football has the potential to overtake the AFL or NRL in the footballing hierarchy, Lynch believes building a football culture in Australia is the cornerstone to future success.

“You’re trying to grow and develop a culture as much as just an appreciation of a game,” he says.

“The AFL and NRL are deeply woven into the culture of their cities and the places where they play.”

“Countries that are the best at football have a football culture. Australia is developing one; it hasn’t got one yet.”

Andrew Dimopoulos is a first-year Bachelor of Journalism (Sport) student at La Trobe University.  You can follow him on Twitter: @AndrewDimo.