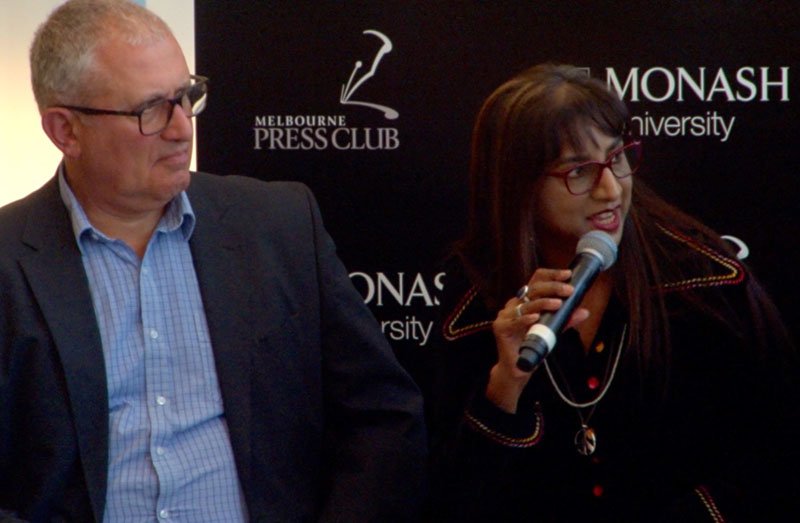 As technology has evolved and the way people consume their news diversifies, media organisations have been forced to constantly restructure and reprogram.

Unfortunately for many in the industry, this has resulted in redundancies and large scale job cuts for some of the best writers and editors, including 3,000 in Australia alone in the last five years, painting a pretty bleak picture for those looking to break into the journalism industry.

But it’s not all doom and gloom.

Rather, it’s simply a matter of adjusting to the changing landscape.

This was a key message from the Melbourne Press Club’s ‘Jobs After Journalism’ lunch in Melbourne on June 6, where journalism and media experts from across the globe addressed the audience on the current plight of newsrooms. The event was held in conjunction with La Trobe university’s New Beats research project.

Glenda Daniels, associate professor of media studies at Witwatersrand University in South Africa, said that the reluctance to accept the technological revolution is particularly prominent in her home nation.

“Journalists who survive today will be those who are learning multimedia, mobile journalism, online blogging etc,” she said.

“But the media houses themselves are not offering the training, so it’s a bit of a conundrum actually.

“The journalism schools don’t seem to be keeping up with what needs to be done, on the one hand. On the other hand, if they don’t teach the basics, you’re not going to be able to do the very basics in journalism anyway.”

This presents a peculiar situation; how do educators adjust to the winds of change, whilst maintaining their commitment to the core principles of journalism and the ability to tell the story?

This dilemma was exemplified Daniels’ advice to a member of the audience who had recently been made redundant after working as a journalist for a number of years.

“The most important thing to do right now is to learn mobile journalism and how to do journalism on your smartphone,” she said.

Rather than establish courses for their staff to undertake in order to adapt their skills, Daniels revealed that university graduates, and those who better understand technology, are being recruited as technological advisors for established journalists.

“[In South Africa] you have a company where you get 21-year-olds to sit with you and show you back-end and front-end website stuff; very basic things that some of us don’t know and are learning…how to do video journalism and uploading of videos,” she said.

“Just because we are over 40 doesn’t mean that we cannot learn the new skills. We actually can.”

Samiaji Bintang, executive director of the Institute for Press and Development Studies in Jakarta, said that Indonesian news rooms have made the adjustment out of necessity, with regards to both their target audience and online readership.

“Quite a lot of the print media have closed, and they have then transferred and become online digital media,” Bintang said, speaking through an interpreter.

“The reason why is that they want to target the younger audience.”

It’s not just the technological capabilities of the new generation that is setting them apart from their more senior colleagues.

The ability to communicate with the youth has also been problematic for the older heads in the newsrooms in Indonesia.

“A lot of the older journalists have not been able to transfer their skills into online digital media from print.”

Some have attempted to start their own organisation, such as Sérgio Spagnuolo, founder and editor of the data-driven news agency Volt Data Lab in Brazil.

“I wasn’t fired from my job before, but I was quite sick of it, so I went and created my own start-up,” Spagnuolo said.

He isn’t alone in exploring the entrepreneurial side of journalism in Brazil, estimating that there have been roughly 30 new initiatives established in Brazil in the last four years.

“It’s been a good field in Brazil to explore and I think that there might be a lot of opportunity there, at least right now,” Spagnuolo said.

Bintang observed that a similar shift was occurring in Indonesia. However, he was concerned about the profitability of these organisations going forward.

“There has been some innovation, particularly from younger journalists who are doing media online. A lot of digital kind of media, targeting stories about gadgets and new innovations, technological news,” he said.

“However, the kind of business model for new innovative start-ups by young journalists, we don’t know yet whether or not the business model is sustainable.”

To view the discussion in full, head the Melbourne Press Club’s website.

The cover photograph was used with the permission of Melbourne Press Club.